The upcoming year should see some monetary policy drama one way or another. What I see as a base case view - which appears to be a consensus position amongst economists at the time of writing - is that the Federal Reserve ("the Fed") will start to tighten around mid-year. However, the global economy is deteriorating, which poses the risk of derailing the tightening train. Since I do not have enough information to strongly support one outcome over the other, I will just give what I see are the best arguments for hawkish and doveish scenarios. 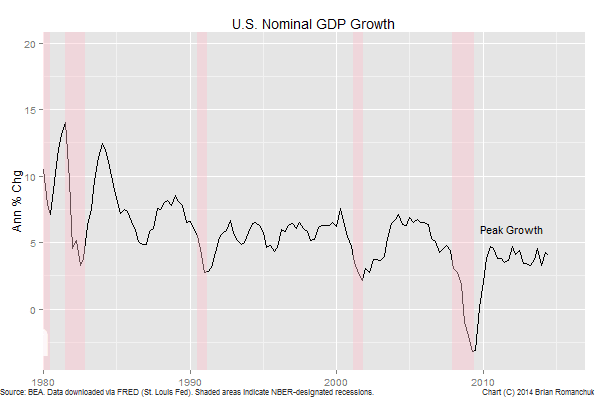 What we have seen in 2014 appears to be  peak growth rates in the United States economy. In other words, any acceleration in growth is likely to be limited. Correspondingly, my "hawkish" scenario does not imply extremely rapid rate hikes. 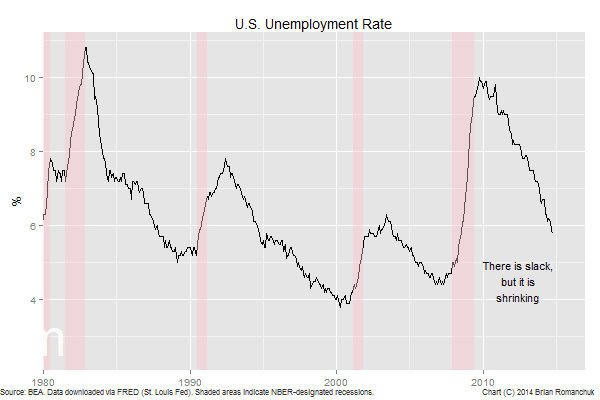 The key market in the United States is the labour market. There is a wide split in fortunes for different groups, with an unusually large amount of people dropping out of the labour force. However, widespread underemployment does not appear to putting downward pressure on wages in the hotter sectors of the economy. Therefore, the Fed will probably follow the signal of the Unemployment Rate, rather than the more muted Employment Ratio. 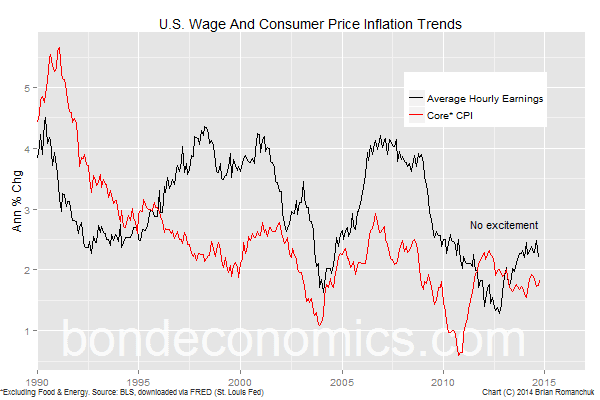 Core inflation (ex-food and energy) has been stable at a low level, and there is no sign that it will pick up in 2015. The Fed is only concerned about expected inflation; realised inflation will not move enough for it to become a factor in the Fed's decision making. (This is not a bold forecast; this has been true for the past 20 years.) Headline inflation (including energy and food prices) will follow oil prices; I will not hazard a guess what will happen to oil.


The Fed will probably start hiking rates around mid-year, and raise rates by 25 basis points per meeting. (Reminder: a basis point is 1/100 of 1%.) That implies that the Fed Funds rate should be around 1% at year end 2015. There are a number of special factors that show up in this cycle.


The best argument in favour of a hawkish scenario is that inflation is not that low, and so that would indicate that there is not a lot of spare capacity in the economy. (This is using mainstream logic that I personally disagree with, but the Fed is nothing if not mainstream.) Moreover, with the policy rate at 0%, it will take two years of rate hikes (at the usual pace of 25 basis points a meeting) to reach a slightly restrictive level (at least on the basis of pre-crisis norms).


There are two main classes of doveish scenarios.


I can think of many potential triggers for an "Ultra-Doveish" scenario.
At the time of writing, I view such an outcome as possible, but not high probability. Since I view the implications of Ultra-Doveish scenarios as being very straightforward ("Buy bonds!"), I will not cover them further here.

If we assume that the Fed starts hiking rates around mid-year, I do not see the path of the policy rate being different than my "hawkish" scenario in 2015. The Fed will not reach the terminal rate - the maximum policy rate reached during the tightening cycle - by December 2015, unless some cataclysm intervenes. Therefore, the trajectory of the policy rate in 2015 is the same in 2015 for both the "hawkish" and "doveish" scenarios. The difference in 2015 would only show up in the form of Fed communications - the Fed will hint that rates are going higher in the hawkish scenario.

The divergence would occur starting in 2016, and it would likely take the form of the Fed periodically pausing. A natural place to pause would be at policy rates that are round numbers - 1%, 1.5%, 2%, etc. For example, the Fed reaches 1%, and lets it be known that it will pause for 1-2 meetings before resuming. This will have the effect of slowing the pace of rate hikes. Eventually, the pauses get longer, and one of the"pauses" turns out to be the end of rate hikes.

While this is going on, the U.S. dollar will probably continue to strengthen, adding to the deflationary undertow to the economy. Financial markets may act in an even more deranged fashion, particularly if Treasurys enter a strong  bear market. This could act to short-circuit the tightening cycle even faster than what policymakers intend.

The arguments in favour of a doveish outcome either revolve around various vulnerabilities in the global economy, or the reality that there is considerable slack in the labour market (which is not measured by the Unemployment Rate). I am sympathetic to these views, but I am not a member of the Federal Open Market Committee.


The line between the Doveish and the Hawkish scenario is fine, and it is not likely to be clear which side of it we are on until late 2015 or even 2016.

Email ThisBlogThis!Share to TwitterShare to FacebookShare to Pinterest
Labels: Central Banks, Outlook, US