Why Analysts Should Not Be Paranoid About Economic Data

There is considerable distrust of official economic data coming out of the United States statistical agencies, at least in internet discussions. (Such doubts are not a concern for "serious" economists, as they are familiar with the points that I discuss here.) Although it is possible to be misled if you are not familiar with the data, I see little grounds for analysts who have access to the full economic data sets to be concerned.

Floyd Norris discusses this in the article "Doubting the Economic Data? Consider the Source". The article was triggered by the (alleged) remarks of a hedge fund billionaire, which argued that economic data were faked. Norris summarises the situation as:


I cannot recall an economic recovery that was more widely doubted than the current one. On the left, the response has often been to cite statistics indicating that benefits have largely gone to the wealthy and not spread down the economic ladder. There is something to that, but it is always true that recoveries, like recessions, are spread unevenly throughout the economy.

On the right, the claim has more often been that the numbers are manipulated by the Obama administration to fool the public.

This is not particularly new; there has been a culture of sniping at the legitimacy of economic data - in particular inflation data - from before I started in finance (late 1990s). It presumably stretches back to the beginning of the collection of economic data. Within Austrian economics, there was a theory that calculating aggregate economic quantities is impossible, and so any attempts to do so are illegitimate. (I would respond that aggregation of 'real' quantities is problematic, but aggregation of dollar amounts is done all of the time; for example in corporate financial accounts. Therefore, nominal GDP is well defined theoretically, even if its calculation is difficult in practice.)

I will also note that saying that the economic data are not "fake" does not mean that the United States economy is particularly strong. For example, David Stockman at Seeking Alpha in "The Fed's Paint-by-Numbers Delusions about the Labor Market" looks at the entire data set and finds that the "headline" jobs number gives a misleading view of the labour market.


At the end of the day, it is overwhelming clear that the headline jobs number is thoroughly and dangerously misleading because there has been a systematic and relentless deterioration in the quality and value added of the jobs mix beneath the headline. It has no value whatsoever as an index of labor market conditions, labor market slack or even implied GDP growth.

There is a considerable difference between the economic philosophy of  David Stockman and myself. That said, I believe that his analysis of the labour market is a lot closer to mine than that of monetary policy hawks who focus on the "headline" jobs and unemployment numbers. But the key point for this article is that he is not arguing that the "headline" number is fake, rather it is misleading based on a wider set of published economic data.


Although I did my best to avoid ever getting involved in credit analysis, I picked up the ethos of extreme caution regarding published data that is common amongst credit analysts. Since the best you can achieve in fixed income is to get your capital back (plus interest), you have little margin for speculative losses. You need to dig into the data to see whether the "story" hangs together consistently, and not just focus on a few summary numbers. You need to develop the Glasnost  attitude of "Trust, But Verify", and not succumb to conspiracy theories when you find out that actors inevitably present data in a fashion that is most convenient for their interests.

I will now present cases where caution is warranted. 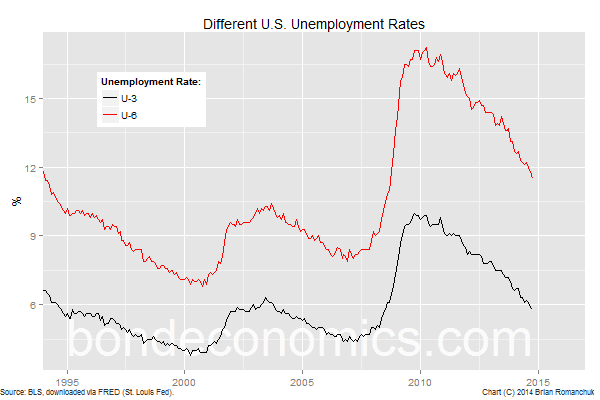 Why You Should Expect Data Not To Be Faked

With my list of disclaimers about caution out of the way, I will now explain why analysts should feel free to use the data sets by statistical agencies without succumbing to paranoia. There are two very good explanations.

Conspiracies are tough to keep secret. The production of government statistics involves a lot of people, and those people have little economic interest in lying about the data. A civil servant that knows that they will be receiving a pension indexed to the CPI has little incentive to chop down reported CPI inflation.

Consistency is tough. The data coming out of a certain fast-growing Asian country is often the subject of analyst scorn - each region publishes statistics showing that its regional GDP is growing faster than the national average; and that national average growth rate is often at variance with other sources. (I do not follow emerging markets, so I can neither confirm nor deny those stories.) The data sets published are immense, and they are continuously checked for consistency by external analysts. (For example, the Fed's Flow of Funds data (Z.1 Release) consists of more than 5,000 series, which form internally consistent stock and flow data.) Components are often compared to private sector data; people would notice if the government claimed the auto sector was twice as large as what is seen in the published accounts of the auto makers.

There have been cases of accounting shenanigans in the private sector. Private sector financial data does not meet the above conditions. The underlying data are not fully available, and it is very difficult to see whether a single corporation's accounts are consistent with external data sets (most corporations are too small to have a measurable effect on aggregate data). Only a small number of senior people have access to the full set of a corporation's accounts, and those people have a marked economic interest in presenting data in fashion that makes the corporation look good. (Note that elected governments like to present "strong" fiscal data, and so they have an incentive to present debt and deficit data in the most favourable light.)

The Floyd Norris article mentioned the first explanation - that conspiracies are tough to keep secret. I put more emphasis on the second. The economic data describe an extremely complex stock-flow consistent system, and these data are continuously checked against other sources. For example, the Gallup organisation calculates an unemployment rate. And where the two diverged in 2013, it turned out that the government data ultimately indicated the correct trend. Mainstream economists are unable to develop plausible stock-flow consistent models for highly simplified economies that have only a few economic sectors; they have no mechanism to generate the detailed data that statistical agencies routinely produce. If they "goal seek" a few key numbers like GDP, the results would be laughable, as the accounts would not add up.

There is one fertile area for conspiracies, and that is the topic of faked price indices. This is a big topic, given the complexity of the subject. Moreover, the aggregation problems I noted earlier makes it more difficult to cross-check data against other sources. And differences in methodologies makes a significant difference, as seen in the gap between the Consumer Price Index (CPI) and the deflator for Personal Consumption Expenditures (PCE), which are supposed to be measuring roughly the same thing.

Given the complexity, I will have to discuss this elsewhere. I just want to discuss one point - the role of hedonic adjustment as an alleged means to manipulating real GDP growth higher.

By way of background, price indices are best defined if the mix of available goods and services does not change. In such a case, we can compare prices directly to the prices in an earlier period, and thus get an idea how much prices rose. (How we aggregate all such price changes is a methodological puzzle.) Such stability is not a feature of modern economies, as products are continuously changing. Hedonic adjustments are a technique used to link the products available at a certain time to those available earlier, so that price changes can be backed out. The adjustment is based on the quantifiable usefulness of each product. Since the use of the product is assumed to give "happiness" (utility) in economic theory, the term 'hedonic' was used (from the Greek).

Example. Assume that a new version of a product is 2 times as useful as the original version, which it replaces. "Usefulness" is measured by some metric, such as the speed of a computer's CPU. If the price of the new good is the same as the original, the result would be treated as a 50% reduction in the "hedonically adjusted" price.

During the tech stock boom of the late 1990s, there were repeated arguments about how the hedonic adjustment for computers increased real GDP growth in the United States. In particular, relative to Germany, where the stolid economic agencies did not use hedonic adjustments. At the time, the "story" to buy U.S. stocks was that the U.S. was growing faster than stagnant economies like Germany as a result of the productivity boom that technology investment was providing.

Many bearish economists were incensed by this comparison, and they argued that the U.S. growth advantage was entirely an artefact of hedonic adjustments. Since the power of computers rose so quickly, the deflator for computers was locked in an extremely rapid deflation. The bears produced calculations that purportedly showed that if the deflator was not subject to hedonic adjustments, aggregate real GDP growth would be much smaller - even though computers are a tiny part part of nominal GDP. (Note that nominal GDP is not supposed to be affected by the GDP deflator, as it is measured in dollar terms.)

Working from memory, someone at a Germanic statistical agency published a working paper advancing this theory. Although mainstream economists were happy to ignore ignore theories from economists at the fringes of the market, this semi-official paper finally provoked a response by Landefeld and Grimm in an article published in 2000,  A later article by Wasshausen and Moulton gives a tutorial on the subject of hedonic adjustments, and notes that the effect of hedonic pricing on real GDP growth is estimated to be less than 0.1% of GDP.

The explanation why the fringe theories were wrong is complicated; the reader is invited to consult the linked papers for details. But I would summarise it as follows: unlike nominal GDP, the components of real GDP are not additive. If you want to calculate the effect of hedonic adjustments on real GDP growth, you would need to re-run the entire GDP calculation. The back-of-the-envelope approximation used by the 'hedonic conspiracy theorists' attempted to isolate the computer component of GDP, and this was inadequate. The end result is that changes to a small component of GDP have a small effect on the aggregate, much as one might intuitively expect. This was fairly obvious if you thought about it carefully, as computer spending did not provide outsized contributions in growth decompositions.

In conclusion, as long as you are doing your homework, there is little reason to be paranoid about economic data. Price indices are more complex, and you need to look at the methodologies to grasp what the controversies are about.

Email ThisBlogThis!Share to TwitterShare to FacebookShare to Pinterest
Labels: Economic Squabbling, Stuff I Read On The Internet