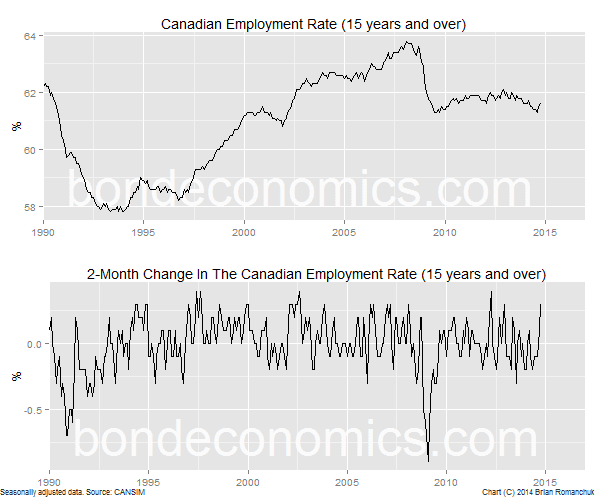 The Canadian labour market - as measured by the Labour Force Survey - has been in fire for the last two months, creating 107,000 jobs. Monetary policy hawks could argue that this represents a change in trend, and that the labour market will start to rapidly tighten, hence the Bank of Canada's policy stance is too loose. I would argue that it is too early to draw such a conclusion, but this bears watching. I give one method to demonstrate that this is not the result of seasonal adjustment issues, unlike what happened recently in Australia.


The chart above shows the "Employment Rate" - the percentage of the total population (over 15 years old) that is working. It is not 100 - (unemployment rate), as the unemployment rate is the percentage of the people participating in the labour force without jobs. (As is well known, the fall in the participation rate explains the bulk of the fall in the Unemployment Rate in the United States this cycle.) I show the Employment Rate because the number of workers as a absolute number is not particularly useful (unless the reader is familiar with the size of a country's labour force). The last two months are the rising hook at the end of the time series in the top panel, breaking the downward channel (using Technical Analysis on economic data).

The Labour Force Survey is noisy, and so such a surge is not unprecedented. The second panel shows the 2-month change in the Employment Rate, and we have seen many surges of a similar magnitude in the past. We would need several months more data to confirm that the weakening trend within the labour market has in fact been broken. 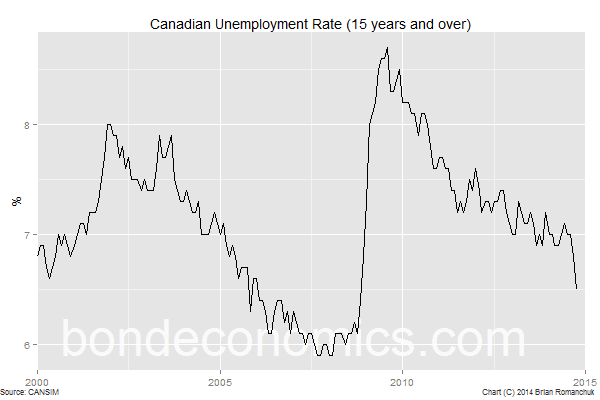 The surge in jobs corresponded to a significant dip in the Unemployment Rate. It has finally broken below the 7% level it has been bouncing around for the last couple of years. Having just retreated to a more doveish verbal stance, the data have whipsawed the Bank of Canada once again.

I do not see any catalyst for a surge in job growth over the past few months. Looking forward, there are a number of cross currents affecting the job market.

Since the strength of this data was unusual, I dug a bit deeper into them. This interest was also triggered by the problems that surfaced in the Australian labour data. I wanted to see whether the Canadian data also had some seasonal adjustment issues.

Bill Mitchell, an expert in labour economics, provides a tutorial on seasonal adjustment issues in this post which explains the problem, that recently occurred. To summarise, the budget for the Australian Bureau of Statistics was cut, and they modified the labour survey to reduce costs. This meant that the seasonality of the results were messed up, and a fictional surge in jobs was created. The methodology was fixed, and the Australian data once again reflect a sluggish job market. 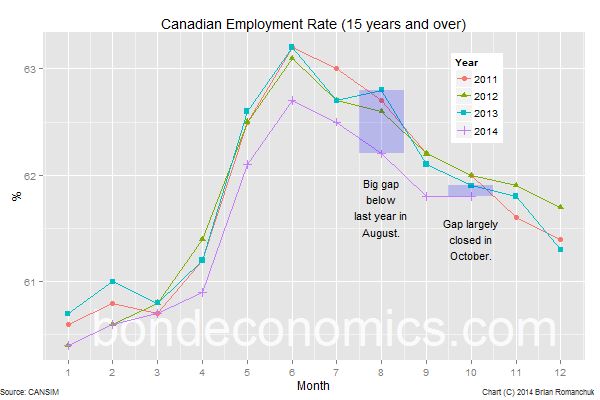 I use the above chart as a method to get a first pass look at the seasonal pattern of the Employment Rate. On the x-axis is the month of the year, and each plotted series represents one year's worth of data.  As we can see, there is a definite seasonal pattern, with employment peaking in June.

If we look at the 2014 data, it weakened considerably below the pattern of previous years starting in April, By August, the  Employment was well below last year's levels. But the two last months changed the complexion of the series, and it was only 0.1% below last year's levels in October. (Note that even though the Employment Rate dropped, the number of workers increased due to population growth.) This matches what happened to the non-seasonally adjusted series.

I am unaware of any changes to the structure of the survey, so I have no reason to expect that there is any other source of problems, It appears that the weakness in previous months was overstated, and so the recovery in September-October is just a reversion to the true trend - which is nothing to write home about.

This application of this mode of graphical analysis in this case was less interesting as it did not pinpoint any problems with the seasonal adjustment. Other series (such as Canadian home sales)  have irregular seasonal patterns, and plotting annual cohorts seems to be the best way of visualising the data.