Why Is Breakeven Inflation Disrespecting The Fed Hawks?

Inflation breakeven rates are falling, despite the worries of hawks at the Fed about "too loose" monetary policy stoking inflation risks. This has raised some eyebrows amongst some analysts (thanks to Leo Kolivakis for the heads up about one such article). Although some of this is certainly due to falling oil prices, forward breakevens - which theoretically should be immune to what happens to spot oil prices - are also dropping. My feeling is that this is the result of directionality in the bond market - breakeven rates move in the same direction of bond yields. It is unclear whether these moves make fundamental sense. 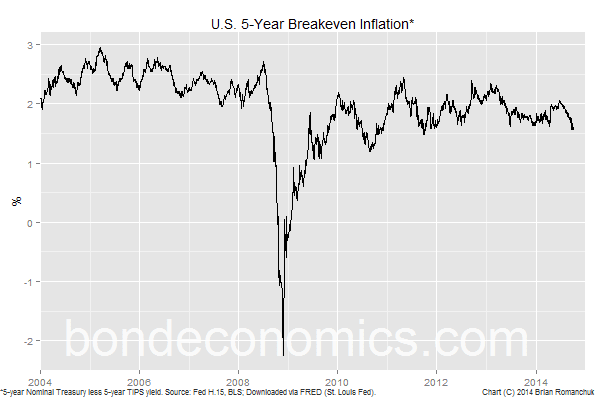 This could be explained by the recent drop in oil prices; since the breakeven inflation rate is based on headline, large drops in gasoline prices will reduce expected inflation considerably. However, this does not appear to be the only explanation. 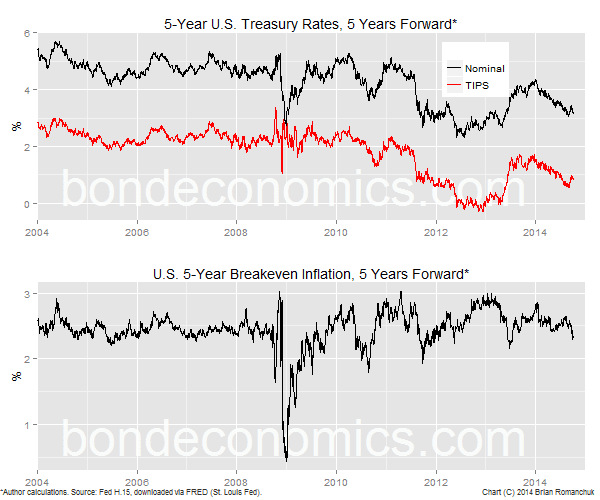 The chart above shows the (approximate) 5-year rates for nominal Treasurys and TIPS, 5-years forward. The difference between those forward rates gives the implied forward breakeven inflation rate. Since the start date for this breakeven is past where the recent oil price drop hits the data, it should not be affected. Even so, the forward breakeven rate has dropped.

These drops do not look dramatic, particularly in comparison to the collapse in 2008, caused by deleveraging mayhem during the financial crisis. (TIPS real yields actually rose while nominal Treasury yields fell.) One could argue that this is just a return to the bottom end of the trading range that has held since the end of the crisis. However, this makes little fundamental sense, at least if you believe the various monetary policy hawks who have been squawking about the inflationary risks created by the Fed's loose monetary policy. It is certainly not what one would expect if the economy was picking up steam, necessitating a rate hike cycle. 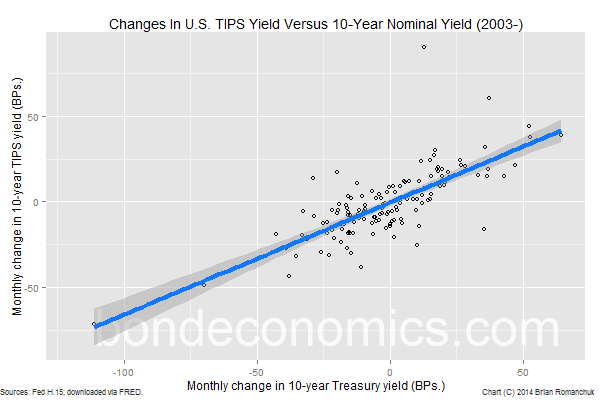 My feeling is that this is result of directionality in the TIPS market, which is also observed in other inflation-linked markets. The scatter plot above shows the distribution of monthly yield changes for 10-year TIPS versus 10-year nominal Treasurys. Although not perfect, we see that the 10-year TIPS yield moves with a sensitivity of about 0.66 versus the movement in the 10-year conventional Treasury yield (the 0.66 is the slope of the regression line). Historically, this sensitivity was even lower - about 0.5 - in other markets.

Correspondingly, what we see is that TIPS yields fall less than nominal bond yields in a rally - which we are in now - and hence the breakeven inflation rate has to fall. I will grapple with the question why conventional yields are falling in the next section.

As a somewhat complicated aside - breakeven inflation rates tend to track at a level just above 2%, at least over the period of interest. This appears to be inconsistent with TIPS yields moving with a sensitivity less than 1 to nominal yields, since there has been a large shift in the level of nominal yields. This can be understood as TIPS yield dynamics being explained by 2 factors:


Why Are Nominal Yields Falling?


I can think of a number of internally consistent reasons for the recent rally in U.S. Treasury bonds.


There are other explanations floating around the media which make less sense. These revolve around the fear of Fed tightening. Although these fears make some sense, this theory is inconsistent with falling Treasury yields.My guess is that these theories are being spread by equity strategists, who spend as little time as possible thinking consistently about bond markets. However, it is possible that they are right about the Fed, and the bond markets are therefore wrong.

Although flight-to-quality and related arguments provide a reasonable explanation for the rally now, this bond market rally will be a trap if there is no follow-through to the United States real economy. I did not comment on last week's employment report, but it is not showing any sign of a move towards recession (but that is not too surprising, since the labour market is a coincident indicator). At this point in time, although I see potential causes of recession, none of them appear to be big enough to overwhelm the automatic stabilisers. This search for a potential recession trigger is the primary question facing analysts at present.