The Bond Bear Market Of 2014 Has Been Delayed 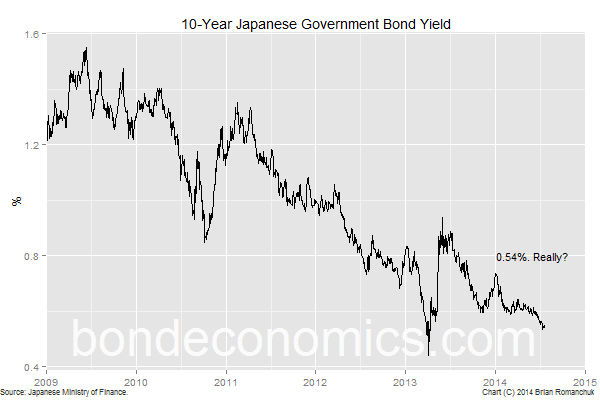 Strategists went into 2014 with a consensus bearish view on bonds (as was also the case in 2010-2013...). The market action so far has not been kind to that view, with yields plunging in the developed markets. It may be that I have fallen into a too mellow summertime mood, but my guess is that this is largely a squeeze of the bond bears during quiet markets (although there are obvious geopolitical concerns).

The JGB market has not been cooperating with those who have been calling for collapse and hyperinflation; rather yields have marched from stupidly expensive to insanely expensive levels. At a 0.54% yield, the 10-year JGB is at a very interesting position.As I have pointed out before (when yield levels were slightly higher...), the payoff on an outright short position which can be held for a considerable period looks attractively asymmetric.

It's A Forward Story 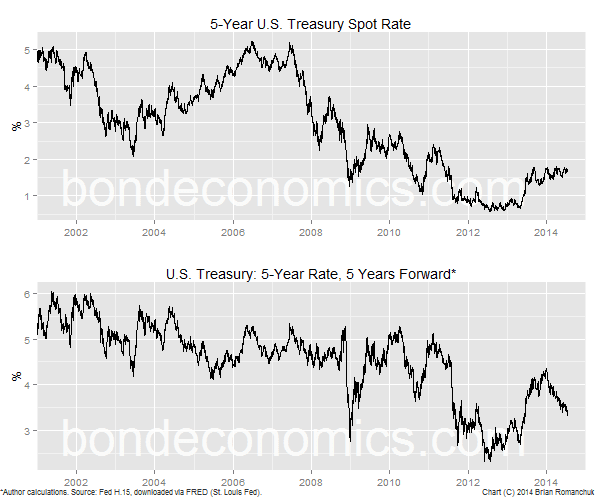 What is interesting about the rally in the U.S. Treasury market is that it a story about the forwards. My crude proxy of the 5-year rate, 5-years forward has been marching steadily lower since peaking around New Year's. Meanwhile, the spot 5-year rate has been tracking sideways. Therefore, the rally has not been about revising the timing of rate hikes, rather it is a downward revision of "steady state" interest rates. This could be explained by a number of factors:


Although I believe that long-term rate expectations needed to be revised lower from the 5% average that held before 2012 as a result of the demand for duration, 3¼% may be too far. In any event, there is unlikely to be clarity until market liquidity comes back in September.