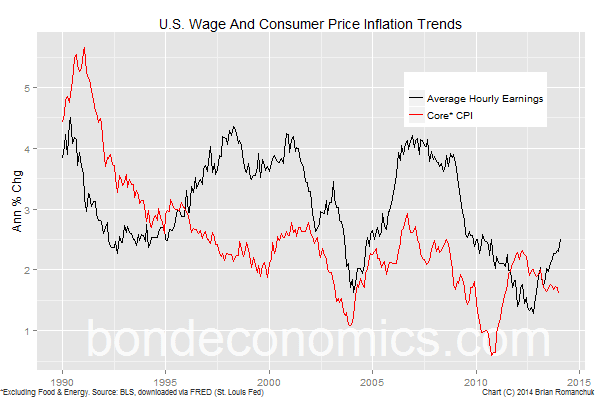 The North American labour market data for February 2014 was not too eventful. In the United States, the most interesting data now is average hourly earnings. Although wage inflation is still at a low level, the fact that it is in a steady uptrend will be the major concern for the Fed. A continuation of this trend would be the main potential trigger for a rate hike in early 2015 (which appears to be the earliest possible timing for a Fed rate hike). If wages stabilise, the Fed can afford to wait until mid- or late-2015 if present trends continue.

The Canadian data was mediocre, with the unemployment rate stuck at 7.0%, a level it first hit in January 2013. The main bullish potential trigger for the Treasury market would the U.S. unemployment rate similarly hits a wall if workers stop dropping out of the labour force.

Posted by Brian Romanchuk at 4:50 PM