Although the momentum behind austerity politics has faded somewhat in the United States, the widespread belief that demographic trends will lead to a bond market apocalypse in the developed countries persists. Alternatively, people worry that their governmental old age supplements will disappear as a result of those trends. I am not particularly worried about these demographic trends, as I believe the frameworks people are using to analyse the problem are incorrect and thus create a huge margin of safety in government finances. This article follows up my previous discussion of how it would be possible to model an expected fiscal collapse within a stock-flow consistent model.


In order to keep this article at a reasonable length for a blog, I am not attempting to “run the numbers” on demographic trends for any particular country. It would take a book length report to do the job properly. This article instead is an introduction to how I frame the problem. Also, in order to keep the article length down, I assume that the only risk of “too loose” fiscal policy is inflation, not default.

The first thing I would not do is to look at the net present value of government programmes, like some alarmists do. Government expenditures and tax revenues will grow at the same rate as nominal GDP in the long term, and that growth rate is higher than discount rate currently. Any net present value calculation of cash flows with this property get arbitrarily large (“go to infinity”) as you extend your forecast horizon. Therefore, any analysis that refers to dollar costs can be dismissed as partisan nonsense immediately.

Slightly less nonsensical are long-term Congressional Budget Office (CBO) forecasts in the United States (and similar forecasts for other countries). The CBO provides the numbers that are to be used in Congressional debates, so that partisans from both parties can at least agree on the “facts”. However, in order to be acceptable to everyone, almost no modelling assumptions can be introduced. I understand that policy wonks need to use those CBO numbers when preparing proposals for Congress. But since I am not in that position, I am free to say that the analytical process is an incoherent mess. (But no, I have no replacement that would be acceptable to everyone, so I have no constructive suggestions how the CBO can improve its methodology.)

Short-term budget forecasts are less bad, although they embed a lot of political positioning which needs to be adjusted for. Newly-elected governments do “big bath” accounting, throwing everything they can into the deficit, blaming it on their predecessors. They then have a lot of room to beat expectations during their term. In other words, they do exactly the same thing that management of public corporations do with their accounting.

What we currently see is that politicians and Treasury bureaucrats who prepare budget analysis have absorbed the incorrect assumption that government budgets should be balanced in the medium term. Any deviation from this orthodoxy leads to howling in the financial press.  This imparts a bias to fiscal policy: what the wonks think is a neutral fiscal policy is actually tight policy. These persistent policy errors explain why we have been in a multi-decade bond bull market. It also makes it easy to analyse fiscal policy: it is invariably too tight, no matter what happens. You would need a time machine to end up in an environment where you need to worry about fiscal policy causing inflation, such as Canada in the 1980's - early 1990’s (chart below). 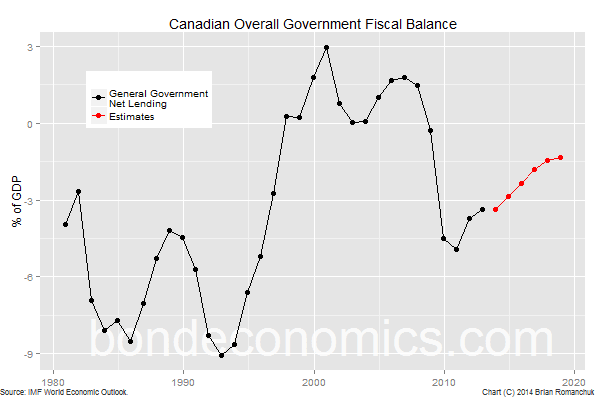 
Despite my disparaging of mainstream macro techniques, a close reading of my previous article actually shows that I accept a variant of rational expectations (or even Ricardian Equivalence!): a really loose fiscal policy in the distant future can affect the economy and markets now. (Nobody sensible would doubt that expected tax changes on a horizon of within a few years can impact current behaviour. For example, there can be considerable “front-running” of sales tax hikes.)

However, my example was over-the-top: fiscal policy was assumed to go from neutral to a rather spectacular deficit starting on a fixed date 20 years in the future. No modern government has ever announced such a ridiculous policy stance. What we see, at most, are policy settings that will lead to a gradual expansion of the deficit over time.

As such, I believe that we will not see an economic response now as a result of future demographic trends for two reasons:


This explains why I am in no hurry to “run the numbers” on demographic trends; the whole exercise is largely a waste of time.

And this makes sense when you think about it: it makes no sense to drive the economy into recession now, in order to deal with a potential inflation problem 10-20 years in the future. Governments have little choice but to set fiscal policy to deal with the current economic environment.

For this reason, demographics is a big yawn-fest for bond investors. For people worried about their government old age pensions, risks remain, as slashing benefits is one way fiscal policy could be tightened. I will be discussing retirement policy in an upcoming article.