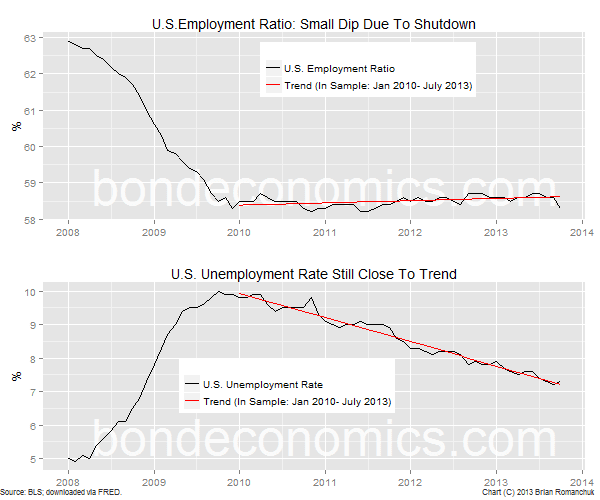 The 10-year Treasury Note was smashed closer to the middle of its trading range on a stronger-than-expected Employment report. The Nonfarm Payrolls (NFP) component was unaffected by the shutdown and printed a strong +204k job gain in October. The Household Survey was impacted by the shutdown, and 735k jobs were lost by that measure. As shown above, the Employment ratio dipped by 0.3%, but the Unemployment Rate did not rise much - the people who dropped out of employment also appeared to drop out of the labor force. The message from the NFP is that the straight-line trends remain intact.


This appears to give the Fed more room to declare victory and go home with regards to Quantitative Easing. A "Dectaper" - reducing the rate of Treasury purchases in December  - has its attractions, as it gets the shock out of the way before the dysfunctional U.S. Federal budgeting process starts to act up early next year.

In Canada, the October jobs report was decent. As always, there were monthly jumps between categories, but 25k jobs were created on the month. Construction lost some ground, but it still up 66k since October 2012. I note that the Canadian manufacturing renaissance remains dead in the water, with the manufacturing sector losing jobs on the month, and 82k over the past year.