Why Will The JGB Market Collapse? 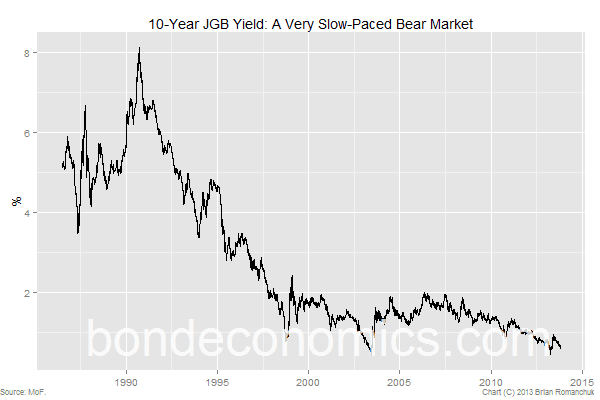 In this article I examine reasons why I believe the Japanese Government Bond (JGB) market will eventually collapse. My explanation is simple: the JGB market will collapse when it is in the national interest of Japan for the collapse to occur.

I define a “collapse” as a rise in the 10-year JGB yield to at least 5%, although not necessarily in one fell swoop. This is a move well outside the experience of the JGB market for the 15 years or so. Headline writers may not agree with this, being desperate for snazzy article titles. For example, if the 10-year JGB yield doubled to 1.20% in the next three weeks, the airwaves will be filled with JGB bears announcing “I told you so”. (My favourite potential headline "Japanese bond yields rise by 100%!") But a 60 basis point move that just returns the 10-year yield to the middle of its multi-decade trading range – who cares? I am talking about a serious bear market here.

I am giving a framework for thinking about why the JGB market will collapse, but I am not worried yet about timing. For reasons that shall be seen, I expect that the JGB market will manage to hold on below 5% for a while longer. Pinpointing the timing will require a deeper dive into Japanese data. However, Japanese data are very difficult to follow; for example fiscal data seems to be invariably presented in a manner to maximise the apparent size of Japanese debt levels. I used to cover Japan as a rates strategist before 2006, and I have seen a lot of basic errors made by analysts who have used Japanese economic statistics without understanding their context. In order to avoid making similar errors myself, I will remain very general herein and do a deeper analysis of the data in later articles.

Why do I argue that the collapse in the JGB market will occur when it is in the national interest of Japan for this to happen? This is based on my preferred way of analysing the bond market. In summary (see linked articles for a longer explanations of these points):
These factors explain why previous predictions of the demise of the JGB market have not panned out.

Why would policymakers want the JGB market to collapse? There are two very good potential reasons.
I will discuss these two possibilities in more detail below. (Note that the two scenarios could occur at the same time, as both can be viewed as variants of the same idea - the yen is losing purchasing power.) I believe the first possibility is the more likely of the two, but I imagine that many analysts will prefer the second.

This mode of thinking is probably alien to many people. I believe this is based on thinking about government finances in terms of household finances, or the Gold Standard experience (introductory economics textbooks often make assumptions that are equivalent to having a Gold Standard in place). If a bank offers you a mortgage for 4%, you do not respond by saying that the rate should be 5% in order to better regulate the operation of the economy. However, this is exactly how you have to think if you are the central government borrowing in a currency you control. 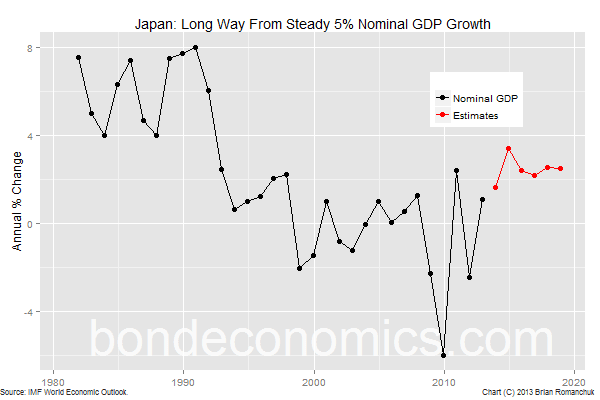 Policymakers historically have tended to follow the rule proposed by the neoclassical growth model: nominal interest rates ought to be close to nominal GDP growth rates. I think that rule is probably a bit of economic superstition, but it can be seen as an approximation to typical central bank reaction functions. As the chart above shows, Japanese nominal GDP growth has been well below the 5-6% level that would appear consistent with the collapse I discuss here. But it is seems too pessimistic to assume that this will be the case forever. Here are a list of possible reasons for faster real growth and/or inflation.
I do not see this growth boom happening in the near-term, but I may be missing something. It seems pessimistic (or complacent, if you are a JGB investor) to assume that this will not happen on a multi-year horizon.

One key issue is that it may be very hard to dislodge Japanese inflation expectations. Japan has achieved price-level stability, and it may be hard to convince locals that this will change. (This is in contrast to many foreign commentators, who obsess either about Japanese deflation or hyperinflation, or both at the same time.) 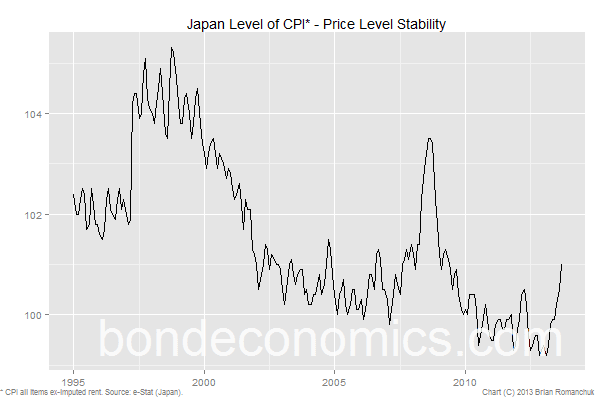 Rate Hikes As A Currency Defence

A collapsing yen is a popular story among JGB bears, but I feel it is less of a risk than a domestically-led expansion.

The key vulnerability of the yen is Japan's need for energy  and other commodity imports; an upward spiral in energy prices could put the yen under immense pressure versus the currencies of energy producers. However, an upward spike in energy prices will simultaneously wipe out the purchasing power of other developed world consumers (particularly in the U.S.). As we saw in 2008, the global economy does not handle surging energy prices well. This limits the capacity of energy prices to remain at extremely elevated levels. It will take time to create the structural conditions we had in the 1970s that will allow the world economy to absorb energy price rises via a generalised inflation.

Otherwise, I find it hard to worry about the yen. The Japanese government has been intervening massively to hold down the value of the yen, and has an immense store of reserves to preserve its value versus other currencies without needing to raise rates. 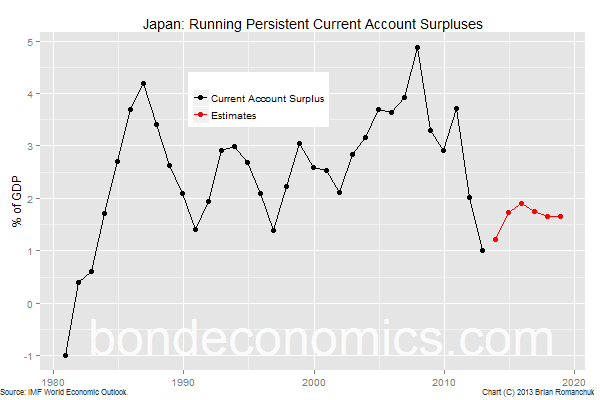 And we cannot ignore the private sector holdings of non-yen assets. Given the configuration of the Japanese economy, with an aging population and slow domestic growth, we should expect that Japan would run persistent current account deficits. The earnings on foreign assets should be mobilised to finance the purchase of imports. The fact that Japan has been running current count surpluses makes it unsurprising that the yen has been uncomfortably strong.

For the foreseeable future, Japan will not need to attract foreign investors to finance a current account deficit; the economy only has to draw back a stream of proceeds from domestically-owned foreign currency assets. Given that domestic investors are typically managing their portfolios versus yen-denominated liabilities (financial debts or actuarial liabilities), they are more comfortable with Japan's optically low interest rates than foreign investors would be.


If and when the JGB market collapses, there will be plenty of quotations by Japanese policymakers complaining about “too high” interest rates. This does not disprove my argument; it only shows that many individuals do not think very carefully about governmental finance. The policy rate will be hiked voluntarily by a committee of policymakers.

Bond yields will rise before the rate hikes; that is the nature of trading expectations. But unless policymakers ratify those rate hike expectations, bond yields will come back down again. For example, this has been the case for the past few years in the U.S.; the market has repeatedly priced in relatively aggressive rate hike paths, and the market was forced to back down each time. The fact that bond yields rise before rate hikes does not mean that bond investors force the rate hikes; bond investors were just doing their job within the current institutional framework of government finance. In other words, I am not worried about the so-called “Bond Vigilantes”.

* Many non-mainstream economists (in particular, MMT economists) have doubts about using rate hikes to control inflation. I have some sympathy to this viewpoint, but I will have to examine this some other time given the complexity of the subject. From the point of view of central bank watching, I expect the Bank of Japan would stick to the mainstream consensus that rate hikes are the best method to control inflation.