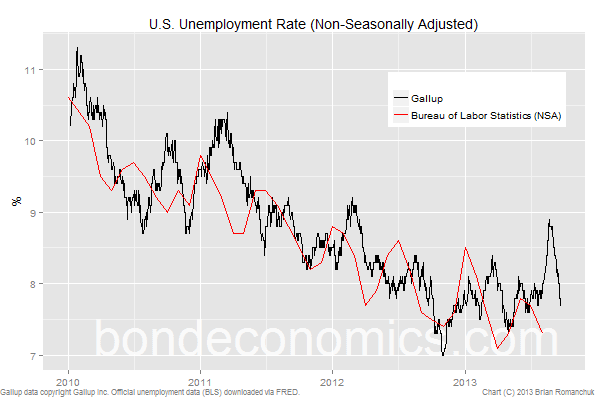 Just a small update on some recent developments in the U.S. labour market outlook. The spike in the Gallup daily unemployment rate now seems to be precisely that – a spike. It appears some extremely high values for a few days corrupted the data. That said, the payroll-to-population ratio from the Gallup survey is still not painting a bright picture, which is consistent with the stagnant employment-to-population ratio published by the BLS. 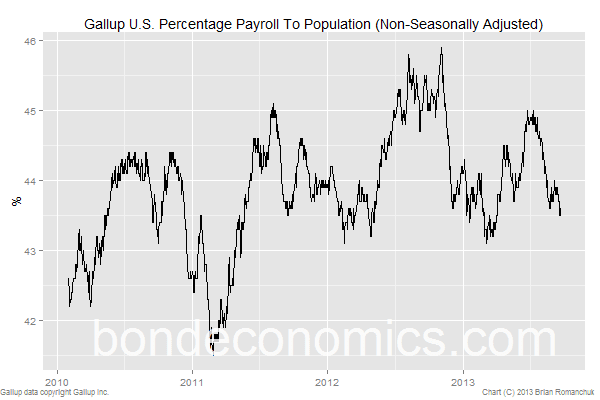 William C. Dudley from the New York Fed pushed back slightly yesterday against the market tightening of recent months, questioning the relevance of the unemployment rate relative to other labour market indicators.

This is contrast to the more hawkish members of the FOMC, who underline that the unemployment rate has been found to be the best measure of labour market slack.

This level of disagreement over the interpretation of the labour market data is another example of how “Forward Guidance” is doomed to fail. If the Fed cannot create a consensus backcast of labour market under-utilisation seen one month ago, it seems unlikely that they can plausibly convince bond market participants to take career risk based on what the committee might do about interest rates two years in the future.