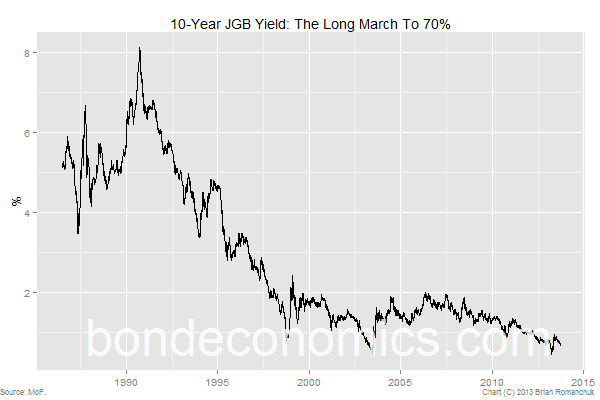 One of the public services now provided here at bondeconomics.com is the tracking of outlandish forecasts about Japan and/or the JGB market. The first entry is provided by Takeshi Fujimaki, an ex-advisor of George Soros and now a member of the Japanese upper house of parliament.

I have enjoyed reading crackpot theories about the collapse of the JGB market since I started covering it around 2001, and this entry by Fujimaki looks like it represents the state of the art in this highly competitive field.

In this article on Bloomberg, we see the following:


Yields on 10-year Japanese government bonds may jump to 70 percent based on what happened in Russia when it defaulted in 1998, Fujimaki said.

Sure, what happened to Russia is a great benchmark for a country with $1,135 billion in U.S. Treasury holdings (TIC data; July 2013) and no foreign currency debt.

“If the yen goes up to 120 per dollar, Mr. Abe doesn’t need a third arrow,” according to Fujimaki, who expects the currency to drop to as low as 1,000 when Japan faces hyper-inflation in the next two years.

Hyperinflation by 2015! Looks like liftoff is starting right now! Really going for the gold bug crowd. 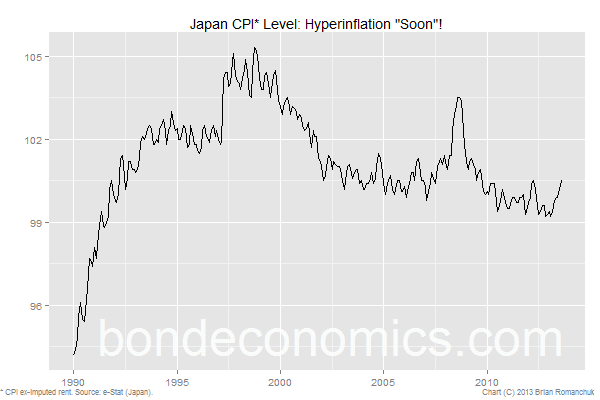 “The Olympics [in 2020 – BR]  will come at the time of a booming economy,” he said. During that period of economic growth “maybe 5 or 6 percent are reasonable levels for the 10-year yield.”

This is actually a very impressive stratagem. Even though his 70% yield forecast has a 0% chance of occurring, there is a chance there could be a “renormalisation” of rates within 7 years; why not? And if the 10-year does rise to something like 4% by 2020, he will be able to say “I told you so”.

What sets this apart, in my mind, is what he did not say.

Of course, his worries (debt default and hyperinflation) are incompatible. In a hyperinflation, the monthly inflation rate is 50% or higher; so even an inflation-linked bond with a standard monthly computation period of one month will lose at least 50% of its purchasing power due to the indexation lag. If the yen collapses, the Japanese government need only sell a tiny sliver of its Treasury debt to buy back most of its debt. But why quibble, since there’s no chance of it happening anyway?

To be honest, the real story embedded in the Bloomberg article is that he wants to cut corporate taxes. The real logic behind his bizarre forecast:
Simon Wren-Lewis wrote an article on how austerity is being used as cover for political objectives about a week ago, explaining why this rhetorical strategy should not come as a surprise.

But to end off on a more serious note: this is part of a push to raise the Japanese consumption tax, which appears likely to occur. The theory is that the planned fiscal policy shifts are supposed to be neutral for growth, as there will be offsetting stimulus undertaken. I do not have a fancy model of the impact of their proposed fiscal changes, but it seems that they are effectively replacing “high multiplier” spending by “low multiplier” spending. In order for the impact to be neutral on growth, the fiscal deficit would have to be larger. Additionally, I am skeptical that businesses will take up investment incentives in the current sluggish growth environment – especially if domestic consumption falls due to the tax hike. And so, it appears highly possible that Japanese policymakers will drive their economy into recession yet again due to a foolish focus on fiscal ratios.

Email ThisBlogThis!Share to TwitterShare to FacebookShare to Pinterest
Labels: Inflation, Japan, JGB Collapse, Stuff I Read On The Internet