The Era of Currency Crises


Currency volatility is in the air again. This article is a follow up of the article yesterday. In that previous article, I discussed how the developed world was free of domestic financial crises during (most of) the Bretton Woods era. The stability we saw in domestic financial markets during this period was not a feature of foreign exchange markets. Even though capital accounts were tightly controlled within the Bretton Woods system, there were still crises associated with unsustainable rate parities (notably serial devaluations of the British Pound). Forex crises have continued periodically, with the next candidate now moving onto radar screens.

The charts below show the extent of the recent plunge in the Brazilian real, and the Indian Rupee as important examples of the turmoil in EM currencies. As a point of explanation: the y-axis shows the amount of the other currency needed to buy 1 U.S. dollar (USD). Thus, the rapid rise means that it takes increasing amounts to buy $1, thus a weakening currency. 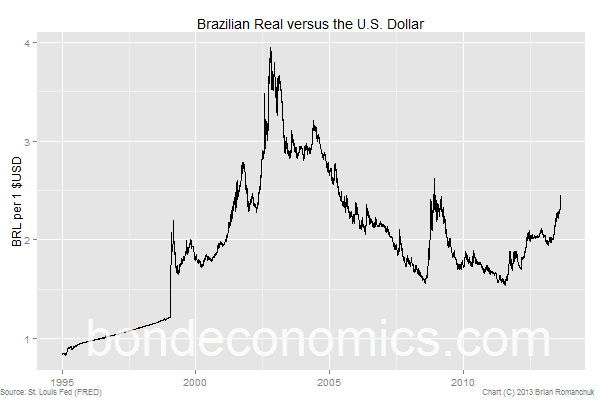 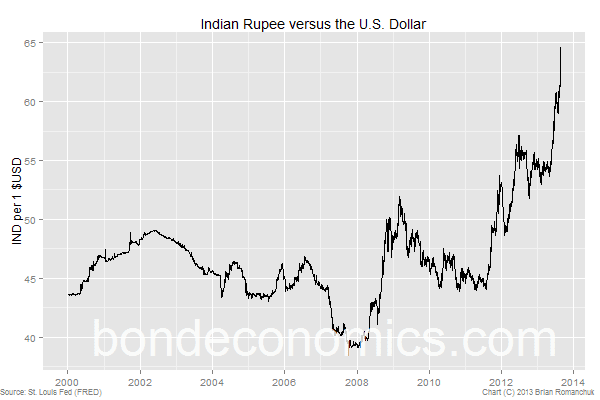 The currency crises of the Bretton Woods era were of a slightly different character than recent ones. The earlier crises largely ended up being political crises (how embarrassing, we have to devalue); the impact on the domestic economies were fairly limited as international trade and capital accounts were tightly controlled. More recent currency crises, such as seen in the Asian Crisis of 1997, have often seen broader impacts. This is as a result of widespread currency mismatches within the financial and nonfinancial sectors.

As long as you have fixed exchange rate systems, you will have currency alignment crises. From a North American perspective, it appears that European policymakers are irrationally attached to fixed exchange systems (something in the water?). As a result, European financial history since after World War I is the study of exchange rate crises; the long-lasting implosion in the euro area is just the latest episode.

Although I enjoy a good panic as much as the next fixed income analyst, I am uncertain whether the current emerging market environment will develop into a full-fledged crisis. These currency moves could just be another episode of the summer “silly season” in financial markets. With a lot of senior people away, markets get illiquid and prices can go for extended runs. When everyone gets back to the desk after Labour Day, it should be clearer whether these forex moves will lead to further destabilisation. The end result could just be a relatively benign realignment of currencies (and a few blown out forex trading books).

And as usual, emerging market policy makers are kvetching about Federal Reserve policy. James Bullard (head of St. Louis Fed) gave a good summary of the source of Fed frustration on the weekend:

“They were complaining about us easing too much,” Bullard said. “Now when we start to talk about taper they’re complaining about too tight of a policy. They have an independent monetary policy and they have to use that to manage” their own economies.”

As I noted earlier, Fed policymakers want to exit QE, as they finally noticed it has done nothing for the real economy. Meanwhile the policy spawns instability amongst credulous market participants, and it also creating a political blowback against the Fed, which poses career risk for Fed employees. Unfortunately, they may yet again be held hostage by self-destructing momentum investors and badly calibrated emerging market policy settings.

I see no compelling reason yet for Fed officials to follow anything other the U.S. real economy in the upcoming policy announcement. If the optimistic economic narrative is upheld by a decent Payrolls number (and/or a continued fall in the Unemployment Rate), September tapering still seems likely. However, the tapering of the flow could be a tentative $10-15 billion a month, which means there will be a long time to reverse course on tapering. (Fed officials have argued that increased stock of Treasury holdings is the measure of the size of the stimulus, whereas market participants appear fixated on the flow. Since QE is broadly ineffective, the stock/flow debate seems rather pointless.)

If we turn to the larger question of how to avoid future exchange rate crises, I am not the person to give a solution. However, I am unconvinced that they can be avoided by new and improved regulation. The British Treasury was overwhelmed during the Bretton Woods era by industrial importers and exporters adjusting their accounts receivable and payable (“leads and lags”). Bankers were conservative members of the establishment, and they did not have a culture of openly engaging in regulatory arbitrage, as is the case for the current generation. Without oppressive state intervention throughout commerce, such as seen in China, there is no way to regulate away the problems inherent in fixed exchange rate regimes when there is massive cross-border trade.

Conversely, developing countries with truly floating forex rates have been currency crisis-free. For example, Canada abandoned its policy of attempting to “smooth” the Canadian dollar in the early 1990’s once it became apparent that the policy was just a form of corporate welfare to forex trading desks. Since then, the Canadian dollar has gyrated wildly versus the U.S. dollar (Canada’s most important trading partner), and this has not caused a “crisis” (other than for those on the wrong side of various trades). 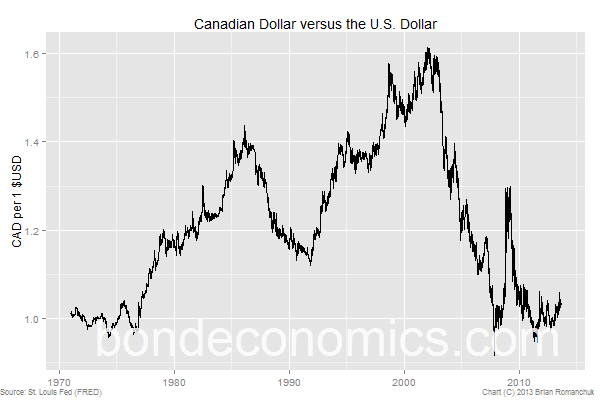 I would put down the lack of currency crises in places like Canada versus emerging markets like Brazil and India as being the result of balance sheet effects, and not much to do with regulation (there being effectively none). Canada has relatively deep and integrated capital markets creating the balance sheet size to absorb flows. Both institutional and retail investors in Canada have large international exposure in their portfolios (aided by the fact the Canadian equity index was a real dog in the 1990's). Institutional investors are very well aware they have CAD-denominated actuarial liabilities to cover. Taken together, this means there are large natural buyers if the currency gets “too weak”. Yes, investor herding generates volatility, but that is actually beneficial from the point of view of financial stability (to paraphrase Hyman Minsky, instability is stabilizing).

The volatility of the currency prevents foolish activity like foreign currency mortgages from making inroads. Canadian corporations often borrow in U.S. dollars, but they typically do so to offset their USD exposure.  Conversely EM policymakers pursue exchange rate stabilisation policies, and did their best to talk up their currencies when things were going well. (“The Fed is printing! We need a new BRIC reserve currency!”) This encouraged borrowing in foreign currency (USD), and this type of borrowing inevitably blows up.

Unfortunately, I do not see the balance sheet effects seen in places like Canada appearing any time soon in most emerging markets. As such, easy solutions to their foreign exchange policy woes seem out of reach.