The Age of Financial Crises

In a recent article Paul Krugman asks “Why have we been having so many bubbles”?  He puts a good deal of the blame on financial deregulation, which is a reasonable but limited explanation. If we widen the question to why we have seen more financial crises more generally (and not just bubbles), I would put a lot of weight on the effect of balance sheet trends.


The post-World War II historical record could be roughly summarised as follows: there were essentially no financial crises of note within the developed countries during the period from 1945 until the mid-1960’s, but the world has lurched from crisis to crisis since then. (Note that there were currency flaps during the earlier period; this will be discussed in a follow up article.) There were certainly financial scandals, but they were relatively quaint, like the Salad Oil Scandal.

I would distinguish a bubble from a financial crisis. A bubble is a market event where the price of the asset is shooting higher as the result of the greater fool theory: even though the price I am paying is foolish, I expect there will be a greater fool willing to buy the asset off of me for more. Modern capitalist economies often have lots of little bubbles blowing up around us (Beanie Babies; baseball cards, …) but these often have little impact on the economy at large (although individuals can have their own personal financial crisis as a result).

Equity markets have been prone to bubble behaviour as the memory of the Great Depression faded. “Go-go” momentum-driven investors displaced conservative value investors over time. This process was well underway by the 1960's. The focus on growth creates a ready supply of greater fools. I do not want to dwell on this point other than to note that these bubbles only mattered to the broad economy (and the bond market) only if the bubble companies launch a major capital expenditure drive.

For example, take the 2000 tech cycle. The failure of the “dot com” companies, whose activity consisted of a handful of developers building non-profitable websites, probably only caused a ripple on the real economy. This is despite those companies having had vast market capitalisations. The real damage was done by the overbuilding of communications capacity, which was capital intensive.

Far more worrisome (and damaging) are financial crises, where the banking sector (or shadow banking sector) has been in danger of failing. Why did those crises reappear starting in the mid-1960’s, and never disappear?

One factor parallels the explanation for equity bubbles: the memory of the Great Depression faded. Hyman Minsky famously described the process of how leverage is increased over time within the economy. Investors who use what is currently considered “aggressive” leverage succeed during a rising market, and this validates their decision. Their practices become the new benchmark, and then the cycle repeats. Deregulation, highlighted by Paul Krugman, aids this process, as rules limiting leverage are discarded.

However, there was another important factor, highlighted by Minsky: private sector balance sheets were very liquid in the earlier era. 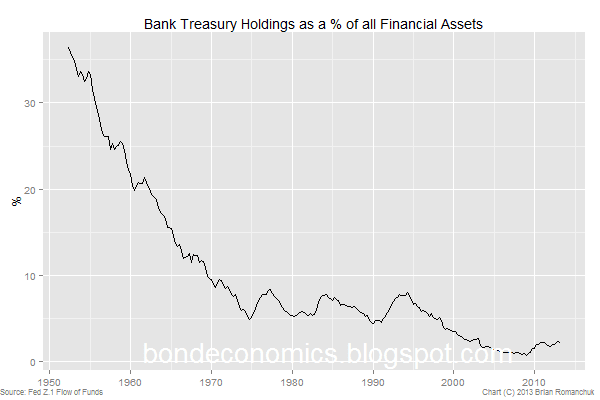 The chart above shows the percentage of financial assets held in the form of Treasury securities by the U.S. banking system (“Private Depository Institutions" which includes some foreign banks and credit unions). When the data starts in 1952, Treasury securities composed 36% of the assets of the banking sector. The importance of Treasury holdings steadily declined until it was about 10% in 1970. (Note that the plotted ratio does not include Agency securities which are far more important in recent decades.) This is the flip side to the well-known drop in the Federal debt-GDP ratio: their liability is the asset of somebody else. The picture was similar for other “Anglo” economies after WWII – Canada, Australia, and United Kingdom – as they had “high” debt/GDP ratios after the war. (Other developed economies had their debt wiped out courtesy of being conquered.)

This decline in Treasury holdings implied increasing liquidity risk for the banking system.  The reasoning is very straightforward: when 20% of a bank’s balance sheet was in Treasurys, nobody is going to spread plausible rumours that the bank is illiquid. (Treasury securities are liquid as the central bank is always there to make a market in Treasury securities, or alternatively it lends against Treasury collateral.) The bank could be insolvent; if a lot of its loans go bad, the value of the bank equity may be wiped out. However, those losses are unlikely to be realised all at once, and so there is plenty of time to inject more equity into the bank. For a crisis to occur, there has to be an immediate illiquidity risk.

The rise of banking crises starting in the mid-1960’s was predicted by Minsky earlier as a result of the analysis of these balance sheet trends. (His emphasis of balance sheet effects meant that he was a forerunner of the Stock-Flow Consistent modeling methodology.)

Turning to the present, government debt/GDP ratios have risen considerably across the OECD after the crisis of 2008-9. Even if national banking systems do not hold the government debt directly, other entities do. This means that the massive overweight of illiquid risky assets by private sector asset managers has been reduced. Therefore, there are grounds to be optimistic that the developed economies will not repeat the liquidity-driven meltdown seen in the previous cycle when it is time for the next recession to hit.