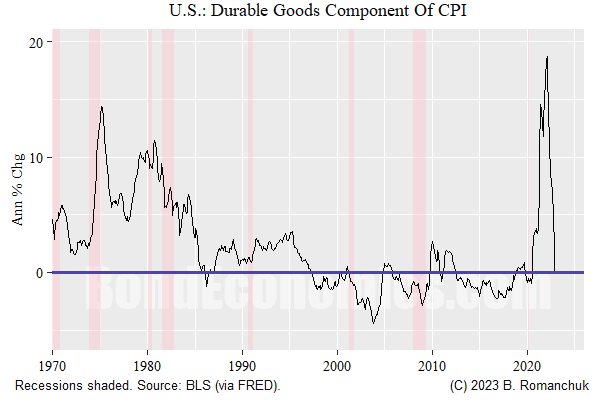 The latest CPI report for the United States suggests that the inflation spike after 2020 was transitory in the rather weak sense that I understood the term “transitory.” I am curling in a bonspiel over the next few days, so I do have a long time to spend on this article, so I just want to outline my thinking on the topic of “transitory.”

For me, the “transitory” nature of inflation was that after the spike subsided, inflation rates would resume at a level similar to the pre-spike levels. This is different than the 1970s. We can see the spike in mid-1970s, and then the inflation rate stabilised around 5% — which was near the peak of the early 1970s. It then marched higher. The problem in the 1970s was not that inflation went up continuously, rather the underlying trend across cycles was higher.

Obviously, the people who argued that inflation would subside in late 2021 — which was a consensus view, including central bankers — were wrong. I certainly had some sympathies with their views — but I am not claiming to be a forecaster, and my view always was that there was massive uncertainty around the post-lockdown economic trajectory. The forecasting issue during the lockdown period was the uncertainty about firm failures — we dodged the massive failures that were possible. Once it was clear that those failures were not going to happen, it was not rocket science to predict that inflation would be perky given the supply chain disruptions.

However, I am not going to say that inflation is dead and buried — the labour market is still relatively tight when compared to the experience of recent decades. We still have “late cycle” inflation concerns, but the inflation prints are likely to remain closer to the rest of the post-1990s experience — and not the 1970s.

I have another draft section on the recent inflation experience (for my book) in the works, and I hope to get it out relatively soon.