I was passed a link to the paper “Exchange Rate and Inflation under Weak Monetary Policy: Turkey Verifes Theory” by Gürkaynak, Refet S. and Kısacıkoğlu, Burçin and Lee, Sang Seok. (They used Turkey, and not the apparently preferred Türkiye.) It was claimed by a well known blowhard economist to tell us something about MMT — but to be clear, that was an assertion by someone who makes a living by being wrong about macroeconomics, and not the authors of the paper. Although it has some relevance to some debates about MMT, it is a stretch to say that is telling us much that is useful.

I will first note that I have no expertise in emerging markets, and spend almost zero time pondering what is happening in Türkiye. What has been happening is that Erdogan argues that high interest rates cause inflation, and he has forced to the central bank to keep interest rates lower than the central bankers wanted. Note that nominal interest rates are not zero, they were cut to 12% on September 22 (day I started writing the draft). Inflation has remained high, and the currency has weakened since this policy has been followed.

Proponents of Modern Monetary Theory dissent from the orthodoxy with respect to interest rates, but there is still a range of view across the proponents. Warren Mosler emphatically argues that the mainstream has the effects of interest rates backwards: higher policy rates raises inflation. Other proponents take a more cautious “effects are mixed” stance (as seen in the textbook Macroeconomics by Mitchell, Wray, and Watts. (I am agnostic on this debate.) Türkiye’s policies do appear to jibe with MMT views, and therefore the less scrupulous observers claim that “Türkiye is doing MMT” — ignoring literally every other aspect of policy.

The paper has a long section about currencies, based on doing some statistical tests as to whether the exchange rate is following a random walk. As one would expect based on purchasing power parity arguments, the nominal exchange rate depreciated.

(The idea behind purchasing power parity is that the value of comparable goods and services between countries should be within some reasonable bound of each other when translated into the same currency. This means that is a country has high inflation rates when compared to another, since nominal prices are rising more rapidly, its exchange rate needs to depreciate. The usual way of modelling this is to create a “real exchange rate” which is the nominal exchange rate multiplied by the ratio of price indices. Although one can debate the exact construction method, we can look at calculated “real exchange rates” and see that they generally do not spin off to infinity or zero. In the most extreme case — hyperinflation — researchers have to infer the domestic price level based on the nominal exchange rate. This means that in that extreme case, purchasing power parity is assumed to hold.)

The authors look at some model to try to show how the nominal exchange rate does not follow a random walk, but rather depreciates based on inflation. Since we expect currencies with relatively high inflation to depreciate versus low inflation peers, it is unclear what this entire analysis did except prematurely kill some electrons. 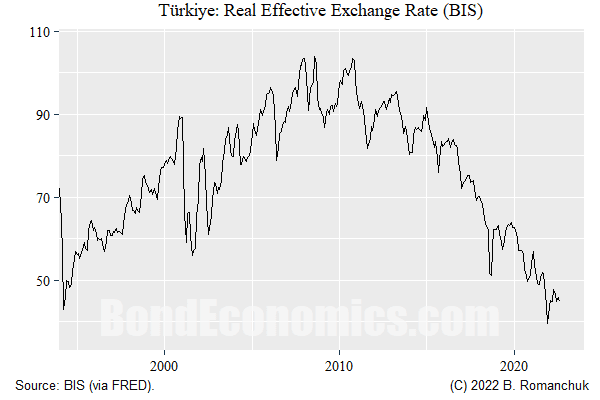 The chart above shows the real broad effective exchange rate for Türkiye (as calculated by the Bank for International Settlements). This is not just an exchange rate versus the U.S. dollar, rather weighted based on trade patterns. We can see that it has been depreciating in real terms since 2010, but it is hard to find any “regime shift” within that trend.

Based on this measure of real valuation, we are only back at mid-1990s levels, so it cannot be seen as unprecedented. (I have no opinion on the calculations used by the BIS.) Can it continue to fall, even if interest rates are “too low?”

The paper then shifts to what is viewed as the main contribution — estimating Taylor Rule coefficients. (The Taylor Rule concept is a key part of somewhat empirical neoclassical economics, where the policy rate is set based on coefficients multiplying the output gap and the deviation of inflation from target.) What we see is that interest rates did not rise as fast as inflation.

Considering that we can just look at the time series of Turkish inflation and interest rates, it is somewhat unclear what the purpose of that statistical exercise is. (I used Türkiye instead of Turkey in this article, but I am sticking with Turkish.)

The authors rather pompously declare in their abstract:

For policymakers, it [the change in monetary policy rules] presents a cautionary tale of the dismal effects of ignoring basic macroeconomics.

This is a somewhat typical pattern for neoclassical economists: making textual declarations not backed by the analysis done in the paper.

Even if we accept the mathematical analysis at face value, all the methodology proves is that keeping the rate of interest below the rate of inflation will not cause inflation to fall. This is perhaps news to the neoclassical “neo-Fisherians” who offered that interpretation of the somewhat opaque mathematics of dynamic stochastic general equilibrium models. However, there is a long history of people arguing that high interest rates add to inflationary pressure which had a more complex argument — that the level of interest rates was not the only factor that matters in the determination of interest rates. Although the model also takes into account real output, fiscal policy variables (etc.) are noticeable by their absence.

Even if we just want to focus on interest rates, it is unclear that looking at real interest rates matters. Turkish nominal interest rates are not negligible — and imply a need for high interest spending by government. If the concern about interest rate policy is that interest income is a component of the fiscal deficit and therefore inflationary, does it really matter whether the interest rate is 12% or 15%, since interest expense as a percent of GDP would end up qualitatively similar?

In summary, the Turkish experience tells us that holding interest rates below the rate of inflation is not sufficient to bring inflation down. Even if this undercuts neo-Fisherian theories, it is not a refutation of more sane theories that suggest that interest rates have mixed effects on inflation.

The paper in question appears to be a political piece with a veneer of mathematics, and it unsurprising came up with a methodology that does not really give us any general principles to work with. However, there might be a way to get results that are directionally similar to those authors.

The first is to achieve the Holy Grail of macroeconomics: come up with a reliable mathematical macroeconomic forecasting model. We could then read off the properties of that model, ending such debates. That said, such a model is nowhere in sight. The Fed employs a spectacular number of Ph.D. economists, and their policy stance has devolved to hiking rates in response to measured inflation (a lagging variable).

A second would be to look at a wider range of inflationary episodes, and see whether hiking rates “sufficiently high” coincided with a reversal of inflation. That is, instead of looking at whether rates below inflation is sufficient to quell inflation (the Turkish example suggests not), but will sufficiently high rates do it?

Although I am highly suspicious of applying basic control theory to economics, we could use the analogy with everyone’s favourite feedback control rule — proportional feedback. (The “P” in PID control.) For a wide variety of engineering systems, a low feedback gain is not enough to stabilise the system, but if we crank it up enough, it eventually works. (With the disclaimer that Warren Mosler highlights — you have to have the correct sign on the feedback coefficient. There is no magic in nature that determines whether the measured gain is positive or negative, despite the chatter about “positive/negative feedback.”)

Although I am not a believer in neoclassical theories of interest rates, I cannot argue loudly against the possibility that hiking rates enough would quell inflation. Sufficiently rapid interest rates tends to destabilise the financial system, which in turn can lead to a financial crisis. And a financial crisis is a great way to stop economic activity dead in its tracks. And since recessions tend to result in disinflation, we can see the chain in causality working out as conventional beliefs would suggest.

My guess is that some attempts at such surveys have been made. I also guess that I would be unconvinced by the methodology.

Once again, the authors did not mention MMT (or at least, I did not see any), rather that was an observation by a mainstream economist who enjoys making up stuff about MMT. From my perspective, there is nothing in the data or the modelling that is in the least bit surprising, so it is hard to see how it is a challenge to MMT.

Admittedly, some of the more extreme MMT criticisms of interest rate policy might be contradicted by the Turkish experience, but my interpretation of the statements is that even if lower interest rates lower inflation, that is not the only factor in play. In fact, arguing that interest rates determine inflation run counter to MMT theories about the determination of the price level.

Despite the condescending tone of the article, it did not really answer any sensible questions about the relationship between inflation and interest rates. One could argue that their statistical analysis is more rigorous than just looking at the charts of inflation, interest rates, and the currency — but since you end up at exactly the same place, so what?

Ultimately, to answer the interesting questions (and not “did inflation in Türkiye fall?” - which we know the answer to already), we would need to be able to falsify neoclassical theory in the area of interest rates. And as I have repeatedly observed, the ubiquity of key non-measurable variables — the output gap, the neutral rate, etc. — falsifying neoclassical theory is extremely difficult to do. That is, even if we found an apparent counter-example to high interest rates lowering inflation, we just need to revise up the neutral rate to explain away the problem.