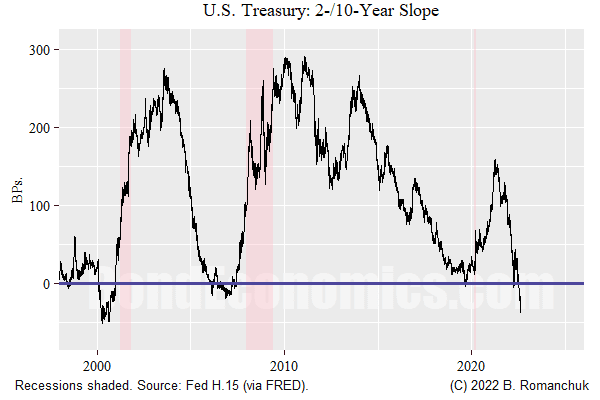 Although it is safe to expect that the yield curve tends towards flattening during a rate hike cycle, the current movement in the 2-/10-year slope is relatively dramatic (figure above). This article discusses some of the mechanics of how slopes are traded.

Aside: Recession Definition Incoherence and Slopes

The debate whether the United States is in a recession or not highlights one of the problems with the ways that economists treat yield curve slopes: as a recession prediction indicator that apparently pops out of somewhere.

If we are not sure whether or not an economy is in recession, it makes it somewhat awkward to argue that the slope is just a recession prediction instrument. Instead, a slope is just the difference in yields along a yield curve, and fixed income investors trade bonds based on the basic principle of trying to make a profit.

A curve inversion implies that instantaneous forward rates decline past some forward maturity, which implies forecast rate cuts (or a really wacky term premium). Whether or not a committee of economists declare a recession is secondary to the question of where the overnight rate will go.

How to Make Money Trading the Slope?

I will now discuss the basics of curve trading. Although some of my readers are in fixed income, I would guess that the majority are not. As such, I am more interested in explaining how trading a curve slope differs from trading better known vehicles like equities. I am also not interested in providing a “how to” guide for people to blow their financial brains out doing highly leveraged fixed income trades — let the people managing other people’s money do that.

To make the example more concrete, I will use the 2-/10-year slope as an example. Trading this slope implies positions in the 2-year and 10-year Treasury.

This implies two positions: a long and a short. The payoff is based on calculating the two returns, which makes it more complicated than a trade with a single leg — like buying shares in a company.

In the previous section, I wrote that there would be a long and short position while skipping over a key detail — the hedge ratio between the positions.

The duration of a 10-year Treasury is longer than that of a 2-year Treasury, and so if both yields rise by the same amount, the 10-year experiences a loss that is a greater percentage of its value than the 2-year.

The way this is dealt with is to calculate the DV01 — the dollar value of a basis point (01) — of each leg. You have a smaller notional position in the 2-year bond so that that DV01 of each leg is equal. In this case, if both the 2-year and 10-year yield rise (or fall) by a basis point, the net gain on the position — which makes sense, since the slope is unchanged.

Nevertheless, we cannot just look at the 2-/10-year slope chart to determine profitability of a trade, as there are various sources of slippage between the time series I plotted and an actual position.

One somewhat academic concern is the convexity of the position. Calculating returns based on the DV01 times a yield (spread) change is a linear approximation of the nonlinear price/yield relationship, and for large yield changes we need to account for higher order terms. Convexity is the second derivative between price and yield (and thus shows up in the second order return approximation), and starts to matter for shifts of 50 basis points or more. This means that if there are large parallel shifts in yields, the more convex bond has a higher return, even if the spread is unchanged. In practice, this distortion only might matter for quite large yield changes, since the curve shift is unlikely to be perfectly parallel if yields are moving.

The next issue is carry — the interest income associated with the position. Although the yield differential shows up, the mismatch in position sizes normally matters more. Since the long and short positions are not the same notional amount, we end up with an implicit cash leg to the trade. So we need to look at the carry difference between a 2-year bond and a cash/10-year barbell. We also need to take into account the effect of special repo funding.

However, the most significant issue is the question of rolldown. When we enter a long/short position in bonds, we are buying/selling bonds with fixed maturities. If we are plotting constant maturity series (as in the figure at the start of this article), the maturity dates roll forward in time. In order to arrive at the profit and loss for an actual slope trade, we need to adjust for the difference between the trade maturities and the constant maturities.

For example, imagine that a 2-/10-year position was entered into 3 months (0.25 years) ago. The maturities in the trade are 1.75 years and 9.75 years. Under normal circumstances, the difference between a 1.75-year and a 2-year maturity is much greater than between 9.75 and 10 years. In an environment pricing near run rate hikes, this means that the 1.75 year trades relatively more expensive versus the benchmark maturity, which means that the 2-year leg tends to outperform versus what the chart indicates.

The net result is that going into a rate hike cycle, the breakeven for future slopes is below the spot rate — i.e., the market is discounting some flattening already. This makes flattening trades less of a slam dunk than is suggested by looking at historical charts around rate hike cycles — although the rapidity of flattening has made that moot in recent past.

The data mining issue is straightforward. The continuum of the yield curve moves in a coherent fashion during the cycle, and thus “similar” slopes are correlated. (The 20-/30-year slope behaves differently that the 2-/5-year slope.) To what extent having slopes breach target levels (e.g., a 0 basis point slope) have differing predictions, the historical record will only have a few points of disagreement. This means that we are doing a statistical analysis on a couple of data points, which one needs to take with a large grain of salt.

Another reason I ignore the 3-month/10-year slope is that it is a non-tradeable instrument. The duration on the 3-month leg is so low that the hedging ratio is ridiculous, and the duration decay would require almost daily rebalancing. Writing about it would just generate condescending comments from traders, and I get enough condescending comments from inflation truthers as well as the people who insist that breakeven inflation has nothing to do with forecast inflation.

It is easy to see that the 3-month/10-year slope is a different beast than the 2-year/10-year slope. The 3-month rate cannot deviate too far from the policy rate, unless something is going horribly wrong. So that slope is largely comparing the policy rate — set by a central committee of academic wannabees — to the market-determined 10-year yield. When that inverts, the interpretation is that the central planners have already made a policy error.

Meanwhile, the 2-year yield incorporates expected changes in the policy rate over the next two years. An inversion of the 2-/10-year slope possibly reflects a forecast of a policy reversal of said central planners. And note that a policy reversal does not guarantee a recession — it might be possible for the central bank to cut rates without a recession. (Plenty of such episodes outside the U.S.) To a certain extent, we should expect the 2-/10-year slope to be more erratic.

I do not give unsolicited investment advice to random people on the internet, although I will discuss principles. Although we know that the curve will flatten during a rate hike cycle, you cannot blindly put on flattening trades as soon as the rate cut cycle is over. You are fighting against the forces I described earlier, and if you are two years too early, your previous losses will offset your profits when the flattening finally comes.

The current cycle did not feature a long “on hold” period, so flatteners presumably did well (I have not attempted to calculate a profit/loss). If you were in such a trade, congratulations. The problem is that the situation going forward is murkier.

A central bank reacting to lagging inflation data is a good recipe for curve inversion. However, the inversion process is probably running into limits.