Yay For Abolishing the Business Cycle

The usual means of justifying a switch to nominal GDP targeting is to point to advantageous properties within in mainstream models. This requires one to take these models seriously, which I do not. However, it is easy to see that there would be theoretical advantages over inflation targeting — under a key assumption.

Let us assume that we can use monetary policy to achieve the following.

Given a choice between stabilising inflation and abolishing the business cycle, I can see the attractions of the latter possibility. However, the last time mainstream economists promised that they could use the science of macroeconomics to abolish the business cycle — the 1960s — it did not work out well.

When we look at neoclassical models, they are built around the assumption that all markets clear in equilibrium — which includes forward markets. If the central bank is not happy with with a possible future path for the price of goods, it allegedly can change interest rates so that prices go where they are supposed to. (How exactly a central bank can set the policy rate based on expected prices without those prices being already determined in markets is one of those questions that neoclassicals prefer to avoid discussing.) This means that the central bank can enforce its objectives on the economy.

Neoclassicals switch between arguing that economic mathematical models are tentative but empirically sound to then demanding that policy be examined using models which imply implausible central bank powers. As such, we need to look at the empirical record and ask whether a different policy framework might have fared better.

When we look at past cycles, we discover that both nominal GDP and inflation tend to be pro-cyclical. (If we define “inflation” as the change in the GDP deflator, nominal GDP growth and “inflation” are mechanically linked by real GDP growth. This means that the two time series are at least somewhat correlated — both rise and fall in a linked fashion.

The correlation is not perfect, the usual observation is that inflation lags the cycle, while nominal GDP is coincident with the business cycle (almost by definition). Although economists love discussing various theoretical “shocks,” it is very hard to find situations where inflation and nominal GDP go in opposite directions for anything other than short periods of time.

This means that there is not going to be a major difference in policy decisions in terms of dealing with large changes to the business cycle (e.g., recessions). Where one might see a difference is in cases where growth and inflation are steady — and only one variable differs from its target. We had such stability in the middle of the business cycles from 1990-2020, but that has not been the situation recently.

One of bright ideas that Market Monetarists have been pushing is a level target — rather than trying to get the target variable to grow near a target level, instead there is a level target that grows at desired rate. That is, instead of hoping that nominal GDP growth is around 5%, we instead pick a reference level of nominal GDP, and grow that target by 5% per year.

This means that if we overshoot the desired growth rate, the level of the targeted time series will deviate from the target level. This implies the need for a corresponding overshoot of growth to erase the deficit. For example, imagine that the nominal GDP growth target grows by 5% per year, and we start out at the target level. If growth undershoots by 1% (4% growth), we would need 6% nominal GDP growth in the second year to erase the deviation — just returning to 5% growth is not enough.

The alleged advantage of this involves (surprise, surprise) expectations. If the policymakers commit to erasing deviations from target, this is supposed to affect behaviour so that the deviations will not be allowed to happen. (It works great in the models, trust me.)

Given my control engineering background and decent knowledge of modern economic history, such a policy framework is horrifying to me. Unless the expected return to target is drawn out extremely slowly, policymakers are committing to a policy of destabilising growth dynamics. For every deviation that happens, a corresponding “counter-deviation” has to happen. Any sort of inertia in the response to policy pretty much guarantees oscillatory deviations (assuming that central bankers were not impeached for raw incompetence, which is what one would expect to happen in the real world).

Meanwhile, if the time to erase deviations is stretched out to a long period, policymakers are effectively saying that they want a cycle that deviates from desired growth rates for an extended period. If there is a growth overshoot, they then want a long period of sluggishness to follow.

In any event, this resembles the rather disastrous policy stances of the inter-war Gold Standard. Policymakers forced through austerity policies in order to regain pre-World War gold parities, which did not help the brittle political economy of the period.

What Would Have Happened This Cycle? 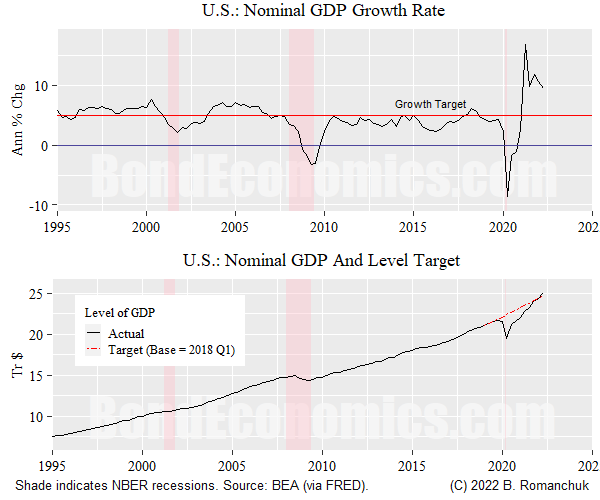 It is very hard to see how using a nominal GDP target would have made a difference in this cycle. Both inflation and nominal GDP had a similar pattern — an undershoot of desired levels during the pandemic itself (oil futures prices going negative), coupled with an overshoot afterwards.

In this current cycle, if policymakers were to hit either an inflation or nominal GDP target, they needed to steer the economy to the Goldilocks outcome: growth continued without causing inflationary bottlenecks. In places like Canada and the United States, there was considerable fiscal support to compensate for the enforced shutdowns. This meant that demand was supported while supply constrained, which implies bottlenecks. Although one could imagine that alternative policy frameworks could have resulted in better outcomes, those frameworks were not put in place in advance, and there was no way of organising them amid the administrative chaos.

Monetary policy — by conventional standards — was loose, and thus allegedly accentuated the fiscal stimulus. (Many MMTers will debate the effects of monetary policy.) The only way that the recent inflation spike would have been avoided if central bankers managed to fine tune monetary policy settings so that growth remained more moderate. (In my view, supply chain disruptions implied at least a transitory inflation spike, so I am not holding forth the possibility that inflation rates be perfectly on target — which some of the more extreme Market Monetarists insist that central banks can achieve.)

However, central banks were stuffed to the gills with neoclassical doctorates who gave us a consensus view that the inflation spike would be transitory. Even putting aside the effects of the Russian war of aggression, this was a serious forecast miss. If your massive teams of neoclassical economists blow their forecasts, it does not matter what objective you set for them: they are going to miss it.

Even if we grant there are some technical advantages for nominal GDP targeting, the main reason I do not take the policy seriously is that it has serious political disadvantages versus an inflation constraint of some form. (This could either be an inflation target, or a fuzzier objective that mixes an inflation goal with goals for employment or growth.) I will sketch out the argument here, since it is a subtext of my previous article discussing the political attractions of an inflation target.

The most important issue is that a nominal GDP growth target does not answer the question: why does a fiat currency have value in exchange? A currency peg offers a somewhat self-evident answer to that question — although if the peg is to another fiat currency, it raises some philosophical questions. An inflation target is a vague commitment to “peg” to the price of a basket of domestic consumer goods, which is understandable to everyone except the CPI conspiracy nutters. What does a nominal GDP target allow someone to buy?

James Bullard in his earlier linked article alluded to “communications issues,” which is what I am referring to. I write advanced popularisations of concepts in this area of economics, and I do not see any particularly exciting way to sell the policy.

The first barrier is that I would guess that a very small number of people understand what nominal GDP is. Although it is clear that many people do not understand the CPI either, they at least have a somewhat instinctive idea of what “inflation” is supposed to be. (The popularity of a certain website that adds 6% to US CPI inflation rates tells us that a lot of those people are innumerate.) We see a lot of references to GDP in financial/economic media, but it is typically real GDP, not nominal. Telling people that the central bank should drop worrying about inflation to target some economic concept that they have never heard of is a hard sell.

Shifting gears and saying that stabilising nominal GDP will have attractive properties runs into the question of why not target what you are actually interested in? If having stable nominal GDP means that inflation would be stable, why not target inflation and drop the indirection? Saying that you want to abolish the business cycle raises the question as to why not target a key business cycle indicator like unemployment? Why not be crazy and give the central bank a dual mandate like “maximum employment, stable prices” (and maybe even throw in “ moderate long-term interest rates”)?

Saying that CPI inflation rates are supposed to average 2% is meaningful for both households and firms. For households, it gives a guideline for financial planning. For firms, they generally cannot expect their output prices to deviate too far from 2% over extended periods. A nominal GDP target gives us very little information to most economic agents. Is the growth inflation or real? What will population growth be?

Although a 2% inflation target was somewhat arbitrary, a 5% (or whatever) nominal GDP target is even more arbitrary. The 1990-2020 period saw inflation run around 2% in most of the developed countries (Japan being a notable exception), and one can argue that it is low enough that it was not a political issue other than for the hard money nutters. There is no law of economic nature that determines the breakdown in nominal GDP growth — is 5% nominal growth the result of 1% real growth, 4% inflation, or 4% real growth, 1% inflation? Those two outcomes are going to be viewed in very different ways by politicians, while central bankers are supposed to be indifferent to them under a nominal GDP target.

This treatment is brief because I do not view nominal GDP targeting to be politically viable. Mainstream economists are going to use the concept to publish papers, but it is going to be hard to convince people outside their in group. In the real world, people who have been paying attention have seen highly credentialled first claim to have abolished the business cycle (“the Great Moderation”) only to have them take desperate actions to save the financial system. (That financial fragility was courtesy of light touch regulation championed by prominent mainstream economists.) More recently, central bankers dropped the ball on their “transitory inflation” call. This is not a great environment to try to convince people that pretty much the exact same people are now going to micro-manage nominal GDP.