Hike Until Something Breaks 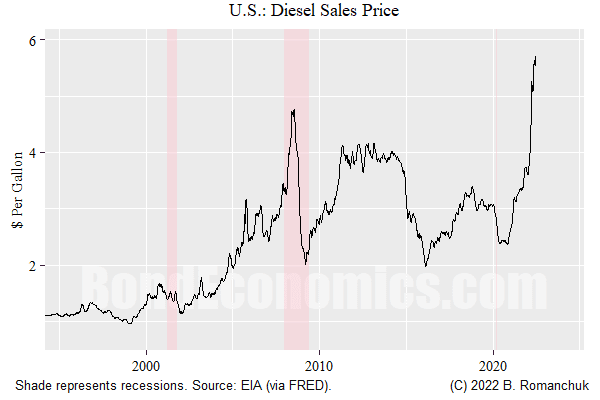 Although neoclassical macroeconomic theory does its utmost to obfuscate matters, monetary policy in practice is straightforward: central bankers react with a lag to economic data, and if they are panicked about inflation, they hike rates until something breaks. Although that description is more flippant than how conventional economists would describe the situation, it probably represents a consensus view. However, there is a hidden complexity: do things “break” because of rate hikes, or do they break on their own?

As the figure above shows, we are in the middle of commodity prices going parabolic, which is a typical mode of behaviour. I showed U.S. diesel prices, as refined products are in the worst shape in the petroleum complex. On a forward-looking basis, one of the three things must happen.

The typical pattern of oil prices is to overshoot and violently reverse. Given the detachment of trading behaviour from fundamentals, I would have no confidence in peak price predictions. Instead, I think the forecast challenge is more time-based: how long until something blows up?

The 2-/10-year slope is relentlessly flattening, being on the verge of inversion territory at the time of writing. Flattening is entirely typical behaviour during a rate hike cycle — the long end does not rise one-to-one with the policy rate.

Recent years have been filled with plenty of silly articles on the lines of “the 17.5-year to 22.75-year Treasury has inverted — bond investors are pricing a recession!” Unlike the random slopes that people have thrown up as examples, the 2- and 10-year are benchmark maturities that are significant for pricing. A deep inversion would correspond to a significant reversal of Fed policy, which would typically happen around recessions.

The thing to be cautious about is that the recession need not happen in the United States. Even though the Fed is domestic-oriented, falling demand elsewhere would cool financial markets and create spare capacity.

At the time of writing, crypto markets have been battered as people once again discover that expecting non-audited entities to keep their liabilities pegged at par is not perhaps the most sensible strategy. Crypto by itself is macroeconomically insignificant, but it is correlated to tech equities. The stock market is not a totally reliable recession indicator. This is particularly true for the tech sector, where valuations bear no resemblance to real economic activity. That said, falling risk asset prices tends to pressure credit spreads — which do matter.

To get the Fed off the rate hike path, something has to give. The challenge is guessing where the weak link is. I will run through the major candidates in order of severity.

Finally, I want to emphasise the limited usefulness of mathematical macro theory. The only place where such a theory would have been of use is giving a better inflation forecast in 2021. Given that “transitory” was the base case for central bank economists (as well as being close to a consensus view). it is clear that the conventional models were not entirely helpful. (The growth industry in the next few years will be the rise of people who were inflation bugs last year.)

At this point, worrying about the innards of inflation is a secondary concern relative to the “will anything break?” question. Things blowing up is a balance sheet analysis question, and we need to focus on the weak link entities. This is not an area of strength for aggregated macro models. To what extent they will work, it is because we dodge potential crises.

The other theoretical angle is that Fed rate hikes would be blamed for any crisis that pops up — even though the policy rate is unlikely to get to any plausible estimate of “neutral” over the coming year.