The tail end of my three-part discussion of banking (link) ended with the argument that the circular nature of funding flows means that they do not represent a constraint on debt growth, instead the willingness (and ability) to absorb credit risk is the constraint. If we accept this, there is an important implication for our ability to forecast recessions that are driven by a contraction in “animal spirits.” I outlined this argument in the first volume of my (planned) two part texts on recessions. (I only have parts of the second volume completed, as I hit some difficult areas that I feel I need to think about more carefully.)

I only have an informal version of the argument, and it runs as follows. The usual driver of a business expansion is private investment, which normally needs to financing by the firms/households that are investing. This implies a need for financial firms to be willing to extend credit. This willingness — the “animal spirits” of firms and financiers — thus drives the cycle. So far, this is pretty much what Keynes wrote. The wrinkle — which may or may not be original — is that the credit markets are in fact markets. If we could predict credit market trends, that largely implies the ability to time markets. Which implies that recession forecasting runs into some version of the Efficient Markets Hypothesis.

There is a lot of academic controversy about the Efficient Markets Hypothesis, which I am not interested in. I am referring to a simplistic version of it: if you think you can predict the direction of markets reliably, why are you publishing academic articles and not on a yacht somewhere? My belief is that this is close to the intent of post-Keynesian views on the business cycle, but they do not frame it this way due to being allergic “market efficiency,” and so they use more confusing terminology to explain the concepts I discuss here.

Not All Recessions Credit-Driven 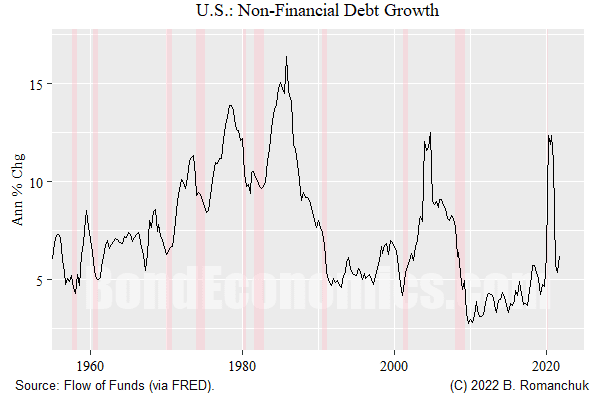 Although most historical recessions were associated with slowdowns in debt growth, it is possible for the economy to contract for other reasons — and such a possibility is a key risk at present. The figure above shows non-financial debt growth in the United States, along with recessions shading. We can see that credit growth historically coincided with slowing debt growth. In recent decades, the Savings and Loan Crisis was associated with the 1990 recession, the 2000 recession was associated with technology firms losing access to credit markets, and the 2008 recession was notoriously a debt crisis. These are the types of recessions I see as difficult to forecast.

However, we also can recessions driven by other causes — which force us to forecast those other drivers. We can have a policy-induced recession (e.g., Euro periphery), where we need to forecast policy. The recent recession was driven by a pandemic (and the response to the pandemic), which is a medical forecasting problem. We can also have downturns triggered by things like the loss of energy imports.

Currently, the most pressing problems seem to be of this type: the renewed lockdown in China, and the effects of constricted energy (and food) supplies. A credit contraction might be triggered by these events, but it is hard to see credit as the driver of any slowdown. As such, the comments here are not aimed at the current situation.

Credit risk being the constraint for debt growth is a problem for most macroeconomic models — agent-based models being the notable exception. It is hard for a mathematical model to capture the uncertainty associated with credit risk, and the tendency of risk appetites to change.

As a starting point, take the simplest macro model structure: stock-flow consistent (SFC) models. (I have a book on building SFC models in Python.) A SFC model has two categories of equations:

The arguments in my banking article can be re-phrased as follows: the accounting identities do not limit debt growth, rather it is driven entirely by behaviour.

We could imagine a model where there are some parameters in the model that act as a “credit growth” factor. That is, the model will settle in at a certain pace of private sector debt growth once other variables enter steady growth states. To then model a credit-driven recession, we could have the parameter(s) jump to new values that reduce debt growth, and this then has a knock-on effect on growth.

Although this technique will create a “teaching model” that helps explain why recessions occur, the problem is that it does not help forecasting. We need to forecast the parameter shift that leads to lower credit growth, which is no easier than forecasting a recession in the first place.

We could assume that the “credit growth parameters” are driven by variables within the model. We might then be able to forecast the parameter changes. However, that implies that we could use this technique to predict market developments (and therefore be on our way to yacht ownership).

DSGE models have notorious difficulties with credit. The entire premise of the models is that entities (households, firms) have a starting amount of tradeable goods and services, and then they trade these endowments amongst themselves to reach an optimal outcome.

“Money” in these models correspond to government money, created by policy, and so policy rules constrain its growth. Since those models are typically mainly used to discuss policy, this is not a problem.

The addition of private credit creates inherent problems with the optimisation-driven strategy of these models.

The methodology is not suited to handle credit risk, and so the best that can be hoped for is adding some heuristic behaviour that allegedly captures credit dynamics. We end up in the same position as SFC models: we need to forecast changes in model parameters.

Agent-based models are in a better position to capture credit dynamics, since they have entities that face the same information limitations that face lenders and borrowers in the real world. As such, it should be possible to create models that generate business cycles driven by credit.

The problem with such models is attempting to fit them to observed data, as they contain an extremely large number of state variables. Although there is research moving in that direction, the fitting problem is always going to be difficult to solve.

Mathematical economic models have a difficult time with modelling credit dynamics, since they are driven by herd psychology. They might be able to explain why the economy contracts if lending seizes up, but predicting such a seizure is just as difficult as predicting the direction of markets.