What Is The Trend, Kenneth?

Note: this is an unedited first draft from my manuscript with a working title “What is Inflation?” This book is aimed to be a primer that acts an introduction to inflation, without being tied to any theory that predicts inflation. The reason is that online discussions of inflation invariably have a lot of superstitions that need to be dealt with before we even get to the thornier questions of inflation theory. This section is from a chapter at the end of the book that deals with the issue of the post-pandemic inflation spike. I am not attempting to do any forecasts, on the basis that it is likely that the bulk of the readers of my book will be reading it after 2025 (based on the sales patterns of my other books), and so would not be interested in what I thought would happen in 2023-4. Since this is in a book manuscript, it casually references other sections, which may or may not have appeared as drafts online already.

When analysing inflation in a country, we need to have an idea what the economic structures are like. I am extremely skeptical about simple theories that allegedly will predict the level of inflation in any country. This is because when we look at the 1990-2020 record of developed countries, events that would have triggered an inflationary spiral elsewhere or during earlier eras had no sustained effect on inflation.

Within this section, I will offer a simple (if not simplistic) way of summarising part of a deeper analytical problem. My argument is that if we look at historical inflation data, we see trends in inflation rates. During a particular era, inflation rates tend to return to its trend line (admittedly, by definition). Although a trend can always be found in any data set, the point is that the trend does seem to persist for a relatively long horizon (a decade or longer).

In this book, I am not going to attempt to offer an explanation why there might be trends in inflation data, I am just assuming that they exist. (At the end of this section, I discuss the possibility of what a non-existence of a trend would look like.) The problem I face is that at the time of writing, it is unclear whether a change in trend has occurred. Although I am writing a primer and not attempting to forecast future inflation, I have no doubt that my editorial slant reflects the condition of the 1990-2020 period, where inflation returned to a trend level. This aspect of the situation is arguably only of importance to my own writing, but the current situation highlights the most difficult part of inflation forecasting: predicting a change in trend. If one read market commentary throughout that period, we saw a lot of forecasts of ever-rising inflation fail. Even if the inflation worriers are vindicated in the 2020s, they will still face the reality that it is far more likely that the trend will turn lower instead of spiralling ever upwards into hyperinflation. Future forecasters would need to predict that future turn around.

Trends in the United States 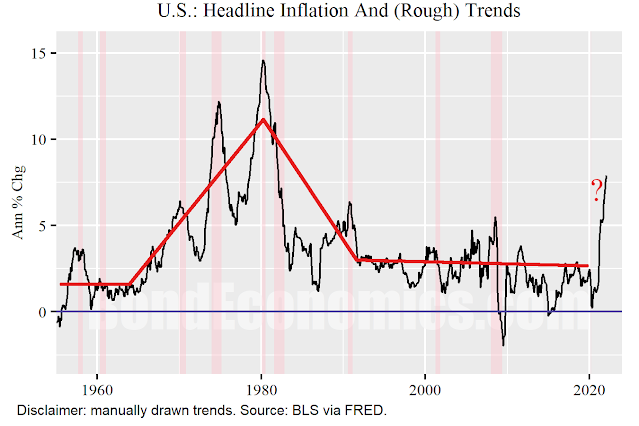 The figure above shows some manually drawn trends on headline inflation in the United States since 1955. (I deliberately cut off some large inflation swings associated with World War II and the Korean War.) We can see four well-defined trends.

We then see the spike of inflation at the end of the chart, where I have no idea where a trend might go next.

I have just shown the chart for the United States in this section for simplicity. The reader can look back at inflation series for other countries, and there will be trends as well. As I discuss elsewhere, the qualitative pattern is typically close to that of the United States, but levels and dates of trend changes are different.

The figure buries the important fact that the United States went off the Bretton Woods system (the last vestige of the Gold Standard) in 1973. Inflation rose ahead of that rupture, which is why the United States could no longer sustain the Bretton Woods system. If we extended the inflation chart to earlier decades (or even centuries), we then run into the reality that prices behaved somewhat differently in the Gold Standard – prices tend to revert to fixed levels over time. Fiat currencies generally do not do this, rather they tend to have trend inflation rates (and a non-zero trend inflation implies ever-rising prices). This institutional break means that it does not make sense to extend my chart further back in time.

As a final technical note, I want to emphasise that the trend lines I drew were purely the result of playing around with a graphics program. One could draw any number of trend lines on the data, with slightly different dates for trend changes, and adjustments to the lines. One could attempt to define the “best” trend lines, but that would be a trap. The “trends” are the result of not particularly well understood dynamics, and the trend lines are guesses about the final “output” of those processes. Attempting to make the trends more “precise” obscures the reality that we are not sure what those dynamics are.

Knowing the Trend is Useful (If You Are Correct)

The problem – and it a big problem – is that we can only draw those trend lines with confidence in retrospect.

Which is the problem that was faced in 2020. Inflation spiked because of various side effects of the pandemic (discussed in a later section). Based on previous behaviour, the very natural assumption was that the spike in inflation would subside as the various “special factors” faded. Using the language of the time, inflation was expected to be “transitory.”

I was not attempting to forecast inflation, but I certainly was biased towards the “transitory” point of view. However, most forecasts of inflation rolling over relatively quickly ended up being incorrect. Then, the Russian invasion of Ukraine in 2022 is likely to add more upward pressure to prices. (The first draft of this text was written during the first month of that war.) The determination whether there has been a change in the underlying trend is the most difficult part of inflation forecasting.

What If “Trends” Do Not Exist?

I have used trendlines as a shorthand for a tendency of inflation rates to revert after “spikes.” The implicit assumption is that there is some economic force behind this reversion. For example, during the 1990-2020 period, mainstream economists argued that inflation tended to return to the inflation target of central banks (which was largely true, at least outside Japan, where inflation refused to rise to the 2% target). I will not attempt to argue what factor might cause such reversion here, but I believe that something causes some form of reversion.

The converse implies that there is no underlying trend to inflation rates: they are either completely unpredictable or random, or they are tracking some combination of other economic variables. The “completely random” possibility seems unlikely, given how closely the average inflation rate in 1990-2020 was to 2%. The other possibility implies that inflation is tracking other variable(s) that just happened to follow trend lines, but they could act differently at any time. This second possibility is more involved, and I believe that variants of it are behind some thinking that we see in market commentary.

One candidate for a “tracking variable story” would be that inflation follows money supply growth in some sense. The money supply grows by x%, then the inflation rate will then move to x% as well (with possibly more complexity, depending upon the theory). In this view, inflation rates are allegedly almost completely under the control of central bank policy. The problem with this is as discussed elsewhere: when we look at actual data, the relationship between money growth and inflation is not that simple, even if it exists. The post-Financial Crisis period saw extremely rapid money growth figures, yet inflation rates were below average. Explaining this away as the result of “long lags” raises the issue as to why the relationship changed after 2020. This means that even if simplistic “inflation trends” do not exist, it just means that there is a different variable (like velocity) that has structural breaks.

It is possible that there are other explanatory variables that can explain inflation (that are not themselves variants of prices), but my concern is that it is surprising that such variables have not been identified despite the continuous ransacking of economic time series databases in the past decades by economists and financial market participants.

Although I believe that inflation behaviour does appear to exhibit regime shifts, that is not necessarily good news for people hoping to forecast inflation. Although we might be able to cobble together forecasting tools that work in the current regime, we then then need to be able to figure out whether we are entering a new one (the problem the forecasting community ran into in 2021).

It is easy to draw trend lines on inflation graphs (like I did) and discuss historical inflation. The issue is trying to figure out which movements in inflation constitute a change in trend – we might need another five years’ data to make that call.

Of course, academics have various fancy mathematical models that are meant to capture regime shifts. However, since I am not interested in padding an academic publication count, I have the luxury of being able to step back and be skeptical about any such attempt. The problem with identifying a regime change in a mathematical model is that it must be able to model the current regime accurately so that it is possible to detect that behaviour has changed. Getting to that starting point is a serious problem, never mind adding in the regime shift concerns.

If we look at inflation data, we can discern trends in behaviour. What might appear to be similar economic events will have different inflation outcomes depending upon the inflation regime. This means that inflation forecasting models are effectively regime specific. Compounding analytical problems is the reality that we can often only determine a regime shift in retrospect. The remaining sections of this chapter will discuss the environment of the early 2020s, and the debates about a potential trend change.