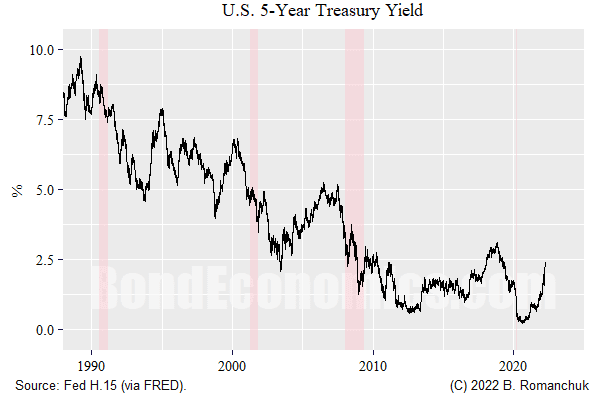 I have been taking it easy for the past week, courtesy of dealing with a mild COVID-19 case. (It largely felt like a cold. However, some symptoms persist, and so I prefer to rest and let them clear.) During my down time, the Treasury market (along with other govvie markets) have been crushed. Fed policymakers have signalled that they want to ramp up the pace of hikes — which surprised me.
In my view, the only reason to hike 50 basis points in a meeting is if you expect that will be followed up 50 basis point hikes. I cannot guarantee that Fed policymakers agree with that assessment, but I would guess that they are lot closer to that position than they were to the idea of a one-off 50 basis point hike that was being floated. One possibility is that the Fed might alternate 50 and 25 basis point hikes. The inelegance of such a pattern suggests that they should take 12.5 basis point increments out of their monetary policy arsenal, so they can go 37.5 basis points per meeting.

If one wants to be a bond bear, I believe that the current setup has the most potential for reversing the trend in yields. I am skeptical about the effectiveness of rate hikes for slowing the economy, which implies that the faster the Fed hikes, the higher rates will end up. This is very different from the conventional belief that something will break within the economy solely because interest rates are “too high.” If we keep getting shocks raising consumer prices — very easy to see in war-strained supply chains — the length of time the Fed will be hiking will be long enough to allow a decent rise in rates. (Maybe I am complacent, Volcker-esque levels of rates do not seem to be in the cards.) My story is that the secular fall in interest rates is not telling us about r* (or whatever), rather the pace of rate cuts was very fast, while rate hikes were done slowly. As such, they never could return to previous levels across each cycle, and so the trend was down.

The main potential spanner in the works for this bond bear story is a recession/inflation roll over that hits within the next year or so. I am not pretending to be a forecaster, but it is not hard to come up with such scenarios. (Inflation rolling over might raise eyebrows, but my feeling is that Russian energy will eventually make its way into global markets. The current spike will result in some demand destruction. Grain prices will be high, but the price effects on highly processed Western diets is buffered.) 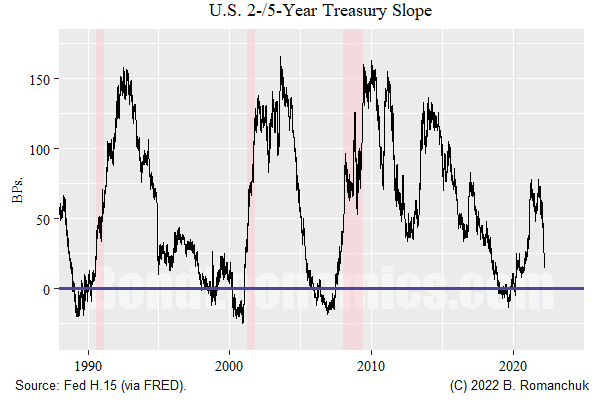 Rapid rate hikes mechanically flatten the curve. In a situation where rate hikes are being front-loaded, the resulting curve is quite flat. Yield movements then tend to be largely parallel moves. It is possible that an erratic Fed could raise term premia and inject some steepening, but that seems to be a scenario that is just wishful thinking by bears.

If we look at the late 1990s, the 2-/5-year curve was trading around 25 basis points or less for almost a half decade. (The inversion around 1998 was courtesy of the Asian Crisis.) We could imagine the curve reverting to similar behaviour going forward, even without immediate risk of recession.

My reading of the situation of the Ukraine war is that the combatants will not be able to sustain the fighting at current levels indefinitely, and we should see a pause of some sort within a month or so. Fighting may resume later, but the status will be somewhat more clear than is the case right now.

As such, I do not think that it will be enough to cause the Fed to stop rate hikes, unless the erratic Russian regime does something to escalate the situation elsewhere.
Email subscription: Go to https://bondeconomics.substack.com/
(c) Brian Romanchuk 2022
Posted by Brian Romanchuk at 11:39 AM