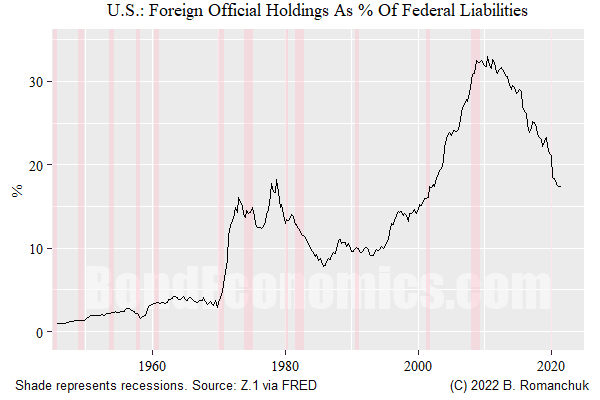 I have seen a fair amount of chatter about currency regime shifts. Although such an event may be happening, there is no particular reason to get too excited about it from the perspective of the developed countries.

The figure above shows foreign official holdings of Treasuries as a percentage of Federal Government Debt — using the Fed Flow of Funds (Z.15) report. We can see why there was a great deal of excitement about “China buying all the U.S. bonds!” going into the 2008 crisis, but we can also note that this series has moved around a lot over time (mainly the result of mercantilist policies of Asian countries). However, the downdraft in foreign reserve holdings over the past decade certainly did not result in a Treasury bear market.

Are There Lessons to be Learned?

Although some people are claiming that the “weaponisation” of banking and payments systems by the West teaches other countries a valuable lesson, the realistic answer that the only lesson is: do not run a foreign policy as stupid as Russia did. The Putin regime managed to create an incredible coalition of countries and parties that are willing to openly send weaponry to be used against Russian tank crews and pilots. This coalition will likely fall apart, but it is not something that one saw in the post-World War II era. It would be extremely difficult for any other country to manage such a feat, since it would be hard for them to do anything that galvanises a normally distracted and divided Western public.

Of course, this answer will not satisfy people, so that we can expect a wave of opinion pieces discussing how countries will pivot away from reliance on Western banking and technology. Such a policy does make sense, and I would not be surprised to see movement on that front. This may matter for the growth of Western banks and technology firms — but that is a micro story, and not a macro one.

Greater Use of the Renminbi

There is a natural trade match between Russia, China, and many “non-aligned” countries. The only plausible “reserve currency” appears to be in China, possibly with the use of gold held in custody somewhere to allow it to be used to settle flows. The problem for this currency bloc is the question of trust — even if they don’t trust the West, they do not necessarily trust each other either.

Although such a possibility brings out the “decline of the West/loss of reserve currency status,” crowd, it’s a nothingburger from the perspective of the West. Given the accounting identities, outflows from Western currencies have to matched by corresponding inflows. All that can happen is that the prices of the currencies (exchange rates) have to move. Given that the U.S. dollar has risen in value during this crisis, it’s not fitting the usual script of “decline.”

The events of recent years hopefully have made corporations more cognisant of the risks associated with offshoring, and we might see less deflationary pressure from cheap imports. Although strengthening currencies elsewhere might exacerbate this trend, I am unsure how far that can go without causing grief for economies trying to use an export-driven growth strategy. Even as China shifts from that strategy, other countries are entering into it.

Although all kinds of entertaining episodes can occur in funding markets, we need to keep duration in mind. The movement of a one-month rate has roughly one-twelfth of the significance of a one-year rate, and one-sixtieth of a 5-year rate. Obviously, we are seeing some scrambling as funding patterns need to adjust to banking freezes, but until there are defaults, this is only of interest to money market traders.

Although funding markets matters, we cannot get too excited about every little movement in spreads. Popular discussion of the Financial Crisis is often distorted by people having too narrow a view of what happened. Going into 2008, investors made the tragic mistake of listening to finance professors who came to conclusion that leverage was the secret sauce to high returns. In addition to borrowing to finance investments, geniuses created derivative structures with huge notional amounts, creating operational leverage. When one part of the market blew up, everything blew up. Nobody knew who else was solvent, and so funding dried up. Although some firms will have managed to blow themselves up in the current crisis, it is harder to see wider contagion — barring a deep recession in the West that forces non-financials into bankruptcy.

In the longer term, the historical tendency of money market investors is that they cannot keep banking system spreads much higher than 20 basis points above government rates once default jitters subside.

Risk-free government rates will just track the reaction functions of central banks, with the long end sensitive to asset-liability matching trends. One could look at the foreign official holdings of Treasuries and try to tease out a relationship to bond yields. I saw many such attempts, but they were invariably exercises in data mining.

Instead, we are on the wrong side of depletion curves for most important commodities. It is not too hard to see this creating some inflationary pressures. Whether this leads to policy rates moving significantly away from zero remains to be seen.

It is very hard to make the case that recent events have been a showcase for crypto from the perspective of governments.

Countries need commodities for consumption, not to act as means of settling transactions. Gold might be used for that purpose (since industrial uses are limited), but the two sides of the transaction need to be in the same place for it to be practical. Which means that countries leaving their gold there have to trust the local government.

So we cannot really think of “commodity-backed currencies,” rather that the fiat currencies of commodity producers will be attractive.

We will see further attempts for “non-aligned countries” to back away from the U.S. dollar denominated trading bloc. This might increase their political manoeuvring room, but the implications for inhabitants of the developed countries within the “U.S. dollar bloc” is limited.

Without a cease-fire, financialised commodities markets are breaking. It is not clear to me how much this will affect the commodities producers themselves. Although I am not exactly in the loop, one main challenge is getting commodities out of Russia through the Black Sea. Although sanctions are causing difficulties, it might be a lot easier to find financial intermediaries than it will be to get shipping capacity into a war zone.

The optimistic scenario for the end of the conflict seems to be as follows, and could be seen as consistent with the news flow. Russia has dominance in the field in the south, and can wear down the Ukrainian army there without needing to do anything drastic. With Ukraine apparently dropping hope of NATO membership, negotiations appear to just be a question of determining the borders and the status of Crimea. Since the Russian military is already applying significant pressure, there is no need to do undertake drastic escalation. I want to highlight that is the optimistic scenario, and it is very easy to come up with more pessimistic ones.