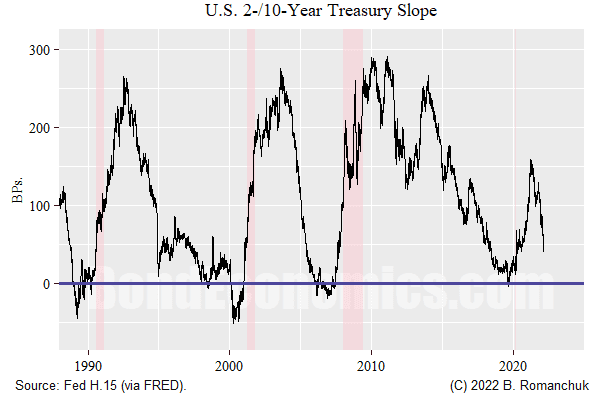 Inflation data in the United States came in surprisingly hot, and so rate hike chatter went off the charts. I think the idea of a “surprise” inter-meeting rate hike is silly in the context of modern Federal Reserve operating procedures, but I now see more chance of an initial 50 basis point rate hike in March as an attempt to assert dominance.
Unless inflation cools a lot, the base case has to be that we are looking at 25 basis points per meeting (plus the wild card of a starting 50) for forecast horizons going out a year. The pricing I have seen is consistent with this, so this should not be a surprise to anyone. After the one year horizon, far more uncertainty creeps into inflation/growth forecasts.

Since I do not think anything of interest happened, I will mainly repeat points that are not commonly appreciated.

Blow Up the Treasury Market?

We have seen some yappy comments from some of the more outspoken Fed hawks. Roughly speaking, they are mad that the discounted terminal rate is too low. However, the only way to do that is either by raising rate expectations, or the term premium (by definition of those terms). The ability of one Fed speaker to get market participants to change their rate forecasts is debatable. So, do crazy things to destabilise the Treasury market to raise the term premium?

Although that is a strategy, it is a rather bizarre one. Over the past couple of decades, I have been reading self-congratulatory missives by neoliberal economists regarding the reforms they made to lower term premiums. Now, some hawks want to raise them? Well, that’s the kind of consistency you expect from a highly mathematical science.

The problem with discussion of term premia and things like Fed balance sheet policy is that economists use toys models that just pick some economic variables at random. Given the number of crypto-Monetarists in the profession, they look at the Fed balance sheet (“money!”) and ignore literally everything else in the bond market.

The reality is that a Treasury bond is just a source of default risk free duration (DV01 might be a better term, but whatever). Although there are some managers that might be confined to only holding Treasury securities, asset allocators rarely have such restrictions. (The exceptions are entities like trusts, and smaller central banks.) If Treasurys get too expensive versus spread product (including mortgage-backed securities, which are more of a vol risk than a credit risk), they just move their assets to those asset classes to get their DV01 there. The stock of USD duration is large, and we have to keep in mind that issuers can change the duration of issuance.

In other words, a rapid change in Fed policy could move the curve a lot in the short run, but that just will result in asset mix and issuance shifts if the curve appears stupidly priced.

The safest observation I can make is that everything you might read in the American media about the convoy protests is incorrect.