Expectations Explain The Secular Collapse In Treasury Yields. Deal With It. 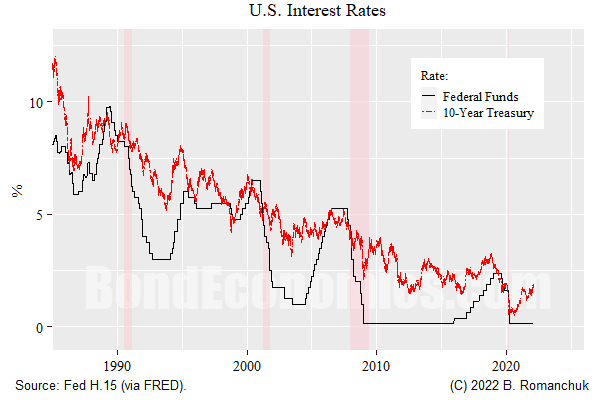 One of my long-running sources of rants is the inability of economics and financial commentators to come to grips with the basics of Treasury valuation. Rate expectations is a relatively simple concept that is the core of all modern fixed income pricing frameworks. Hellfire, it’s even embedded into DSGE models. Nevertheless, academics and other sophisticated commentators keep attempting to put lipstick on the pigs that are alternative explanations for the secular decline in Treasury yields.

Why can I be so confident in dismissing those alternative explanations? The answer is straightforward: no commentator puts anything other than misleading numbers in their discussion. The chart above — showing the decline in the 10-year Treasury yield since 1985 — explains why.

Depending upon the starting point, the 10-year Treasury yield has dropped hundreds of basis points over time frames longer than the past couple of cycles. (Based on the H.15, 989 basis points since 1985, 613 since 1990, 607 since 1995.) There are no plausible estimates of forward looking 10-year term premia that have fallen by much more than 100 basis points since those dates (all the ones I recall would be 50 basis points or less, but I gave up on reading the term premia literature a long time ago). Meanwhile, the situation would be worse for the 5-year maturity, since rates fell similarly, and term premia are normally estimated to be less significant.

If you read any paper discussing “safe asset demand” or a “savings glut,” that actually contains an estimate of the term premium — and not just economist hand-waving — the term premium due to this effect is invariably moving 50 basis points or less. Just compare that quantity to the absolute change in yields, and ask yourself: why do I care?

Technical Appendix: Why We Can Decompose Rates Into Expectations and a Term Premium

(I will keep this brief, I may expand later into a full article with more details.)

Modern fixed income pricing theory (for credit risk free instruments) will start off with the notion of risk neutral pricing, and we end up with a discount curve that is the expected value of the compounded path of the overnight risk rate. This discount curve is all that is needed to price instruments with a linear payoff with respect to rates — e.g., bonds and swaps without embedded options.

Given a source of swaption/cap pricing, we can then back out the rest of the risk neutral probability distribution without a whole lot of controversy regarding models.

If we go no further than the risk neutral probability distribution, then bond yields are entirely the result of “expectations” by definition. One can call it a tautology, but there is nothing else to say.

In order for any other factor to appear at all, we need to introduce the notion that there is a bias between market participant’s forecast probability distribution versus the risk neutral distribution. This bias in probability distributions results in the “term premium”: a bias between the observed forward curve versus a hypothetical “unbiased” forecast curve. If factors like an alleged “savings glut” influenced bond yields, they have to live inside the term premium — by definition.

Although most observers accept that term premia exist, there is not a great consensus on what the term premium actually is. (I am skeptical of all the academic models I have seen.) That said, we probably can look at term premia estimate and reject kooky ones based on their behaviour. Very simply, it is going to be extremely hard to find a term premia that “explains” the secular drop in bond yields without it falling to the “kooky” critique.