I have again turned my attention to my inflation primer. I have been filling missing bits, which does not translate into cohesive articles to post. This article just runs through a few topics on inflation. From a business cycle watcher perspective, a recent article by Jason Furman is probably the most pressing.

Jason Furman had a recent AEA talk entitled “Why Did (Almost) Nobody See It Coming and What Does That Mean for What’s Next?” The title refers to the controversy after the Financial Crisis regarding mainstream economists missing the Financial Crisis.

As an aside, I do not think the comparison is a good one. Going into the Financial Crisis, neoclassical models implied that a collapse in demand caused by the financial system blowing itself up was impossible. Conversely, inflation spikes can easily be generated in such models, we just need a sufficiently large shock.

Furman suggested the following way to visualise what happened in 2021, which I have some sympathies for.

1. Use multipliers and other standard methods to predict nominal GDP

2. Use productivity capacity of the economy adjusted down for pandemic to predict real GDP

3. Price increases are the residual

The problem is that the simple model works extremely well because of hindsight. One should not lose much sleep over backcasting data in 2021 in 2022. Particular issues include.

I am not a forecaster, and I am not surprised that forecasters missed their inflation forecasts in 2021.

The Switch to Goods Consumption 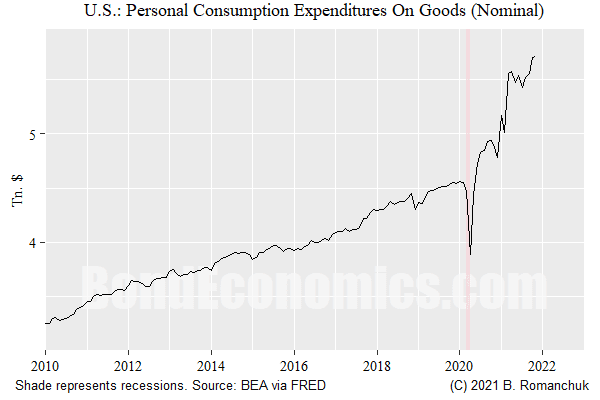 One of the things that blindsided people is the switch to goods consumption. The chart above shows nominal personal consumption expenditures on goods for the United States. There was a surge relative to past history once the initial lockdown dip was passed.
A rapid increase in goods production presents the greatest inflation risk. The reason is that goods production runs into physical production constraints more easily. On the services side, the output is more nebulous, and certain types of services (in particular, anything that can be downloaded) can easily service new customers.
To what extent that switch could have been forecast, one might have been able to foresee some inflationary risks. That said, it was unclear how unforecastable that switch was. 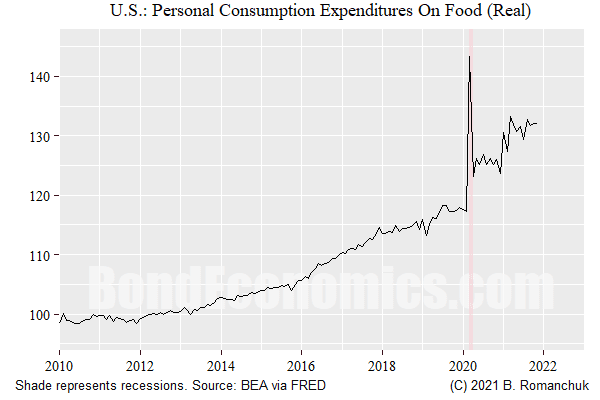 However, part of the switch to goods consumption reflects food expenditures. The food consumption within the “goods” category rose markedly (real expenditures shown in the figure above). Conversely, eating/drinking away from home — within services — was much weaker. This switch was perhaps predictable, and the inflationary effects should be largely a one-time effect. The foods consumed in home cooking do not match restaurant fare, and so there were mismatches. At this point, these mismatches have probably been absorbed.

No matter how useful the simple model was for 2021, its limitations show up if we look forward if we do not expect significant changes in fiscal policy. If we do not have any insight from multiplier analysis, then we are stuck with trying to estimate the effect of nominal wage growth on demand — using inflation rates to forecast inflation.

Is the Fed Behind the Curve?

There was at least a trio of recent articles by ex-Fed policy committee members arguing variants of the story that the Fed was in danger of losing its credibility because of being behind the curve.

I see no point of pursuing those articles since they are so lightweight. If inflation does head lower and things settle down, those authors will not admit they were panicking unnecessarily. They will just say that they were pointing out the risks.

The more interesting bit is that the premise is awkward. The Fed spent almost a decade missing its inflation target to the downside, never mind the “maximum employment” mandate that the hawks have thrown down the memory hole. If the recent jump in inflation — which was not exactly a complete surprise, rather the magnitude and timing was unclear — was enough to wipe out that “credibility,” what exactly is “credibility” worth? Is it truly optimal to drive the economy into a recession every time the inflation rate ticks above 2%?

Urban Legend About the German Constitution?

One of the stranger things I ran into with my manuscript is a story about (West) Germany and inflation that I wanted to note. When I was at some inflation-linked conference, some sell side analysts were discussing the prospects of a German inflation-linked bond. I was sure that they said that there was a need to get some form of legal dispensation for its issuance, since the German constitution — or Basic Law — allegedly barred using price indexation in contracts. (Since they indeed issued linkers, any alleged legal issues were apparently cleared up, but I was not paying attention to what happened.) In addition to this vaguely-remembered statement, I have found at least one reference to this “constitutional ban” in the economics literature. (The easiest to find citation was embedded in a footnote by a well-known American mainstream economist in a book on inflation reduction policies.)

However, when I looked at the translation of the German Basic Law (including an older version that would precede any recent amendments), such a clause was not visible. My initial queries led to a response that might be best described as “what are you talking about?”

I am just hoping that any of my readers will have any useful information on this. If it were purely my memory of some conference, I would drop it, but since the story has made its way into an academic paper, it seems worth pursuing.

I realised that it would be strange to release my book on inflation without having at least an inkling of an idea whether the latest rise in inflation in the United States (and Canada) is in fact transient or not. The book is not supposed to be about inflation forecasting, but the recent price rises are one of the few interesting things to happen on the inflation front for a couple of decades. As such, it seems best to wait, and instead look at other topics.