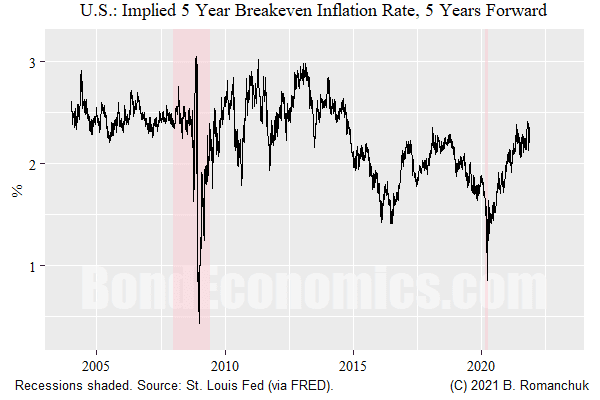 We had a blowout CPI print in the United States last week, which I probably should have discussed. Unfortunately for my writing productivity, I had some consulting work going as well as visiting family, so I did not have time to dig.

Since then, large numbers of electrons were spilled online discussing the inflation outlook. As I doubt that I will add any details that are novel at this point, I have decided to bow out of that discussion. Instead, I will just offer a few generic observations.

The first thing to note is that forward breakeven inflation rates (as calculated by the Federal Reserve) have risen since the pandemic lows — but are still not above the levels seen in the early 2010s. (As a technical note, one might be able to fine tune breakeven inflation calculations with access to security-level data. But the Fed H.15 data is perfectly adequate for a big picture chart like the one above.)

We need to use forward inflation since everybody accepts that there will be a run of punchy inflation data over the coming months. How long the “punchiness” lasts is the topic of heated debate. As a non-forecaster, I am staying out of that debate. That said, the TIPS market indicates that the punchiness subsides within 5 years. Say what you want, that is not exactly a secular shift in inflation pricing.

Could technicals influence the forward? Sure. The problem is that the most important technical is the demand for inflation protection by the private sector, which is really only counter-balanced by TIPS supply. If people were really worried about inflation, they would be bidding up protection versus fair value — the breakeven ought to be biased higher versus “true” expectations. If that were the case, then the “true” expectations are not elevated relative to “target” (which is vaguely defined at this point).

So unless we are convinced the market is wrong — and it could be (you pays your money, you takes your chances) — the inflation story is just about the timing of “transitory.” Even without digging into data, it seems clear to me that we need to get the flurry of holiday spending out of the way before we can see what the underlying supply chain status looks like.

The other angle is wage inflation. I think we have seen some unsustainable business models based on the availability of desperate workers, and/or hoodwinking people who were unable to account for depreciation into being “contractors” have finally hit the end of their sustainability. Such business are going to face higher wage costs. It remains to be seen whether this is a one-off shift, or sustains itself.

In any event, I hope to return to my inflation manuscript later this week. My feeling is that it will make sense to hold off finishing the book until after we see the backside of this inflation wave (or not), so if I get the bulk of the text sketched out, I will then let the text rest for some months.