I have made some progress on my agent-based modelling project (in between CFL playoff games). It is now possible to interact with the simulation, making this the minimum viable space trading game. My objective was to get the economy running in a somewhat sensible fashion, so that it is possible to examine how any particular agent reacts to a coherent economy state, and thus I am free to refine behaviour.

(I have a Patreon to support my open source projects, of which this is the one that is currently getting the most development time. I also have my stock-flow consistent modelling module, as well as my research platform that I use to generate the charts for my blog. All use Python, although I do my plots in R.)

The code is split between two GitHub projects: “agent based macro,” and “space trader”, both available at my project page: https://github.com/brianr747. The agent-based macro project is aimed to be the “serious” agent-based model simulation engine, while the “spacetrader” project uses the engine to build a hobby video game. Currently, the only working model is in the space trader project, but once I have an adequate model, I will put it into the agent-based modelling project so that it is available as a stand-alone entity. Since everything is extremely rough, I almost no user documentation, and so it requires some Python expertise to get anything to work. 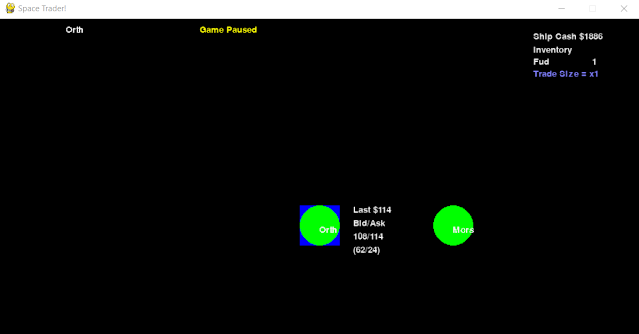 The figure above shows the (primitive) client screen. There are two planets (green circles), and the player controls a spaceship (blue square) that can fly between them. The player can buy/sell the only commodity (“Fud”), and the cash available and ship inventory is shown at the upper right.

The player only sees the prices (and size of the best bid/offer) at the current planet.

The objective is to buy low and sell high. (Spoiler: this is rather easy to figure out with one commodity and two planets.)

Keyboard commands are used to control the simulation.

The model is a hybrid between a pure agent-based model and an aggregated model. Some “agents” are in fact aggregated sectors. They exist on “locations,” of which there are two in the game simulation. In a Earth-based simulation, they could be cities, countries, regions.

The agents/entities that exist are as follows.

With just the few additions noted above, we end up with a minimal model that describes a mixed economy with private producers and a Job Guarantee.

These extensions would allow quite complex simulations. Most of them appear to be relatively straightforward to add, with only multiple currencies looking awkward. The bulk of the work at this point is getting more complex behavioural functions.

Since it was unclear to me what structure would work, I went with the “build something that works first, then refactor” strategy. However, I will need to start refactoring relatively soon, since the changes affect how new features are implemented.

I hope to get more coding done over the coming month, with an eye to putting the project in a state where it is easy to pick up and add new features. After that burst is done, I will return to sporadic updates.

I expect that there will be two work streams.