One of the ongoing arguments about Modern Monetary Theory (MMT) that I run across is the general disdain for monetary policy among MMT proponents. (At one extreme, Warren Mosler argues that interest rate policy works in a way that is backwards versus the consensus.)

The MMT position is straightforward, yet critics seem incapable of framing it correctly. Although Mosler is not alone in his views, many academics have a more nuanced position: interest rate policy has mixed effects, and is much weaker than the mainstream assumes is true. (This is in line with many post-Keynesians, although post-Keynesians are all over the map in terms of specifics. I believe it is safe to say that some post-Keynesians have views about monetary policy that are extremely hard to distinguish from conventional ones.) Whether or not MMT proponents’ policy prescriptions have merit, the argument that interest rate policy is largely ineffectual is a stand alone area of debate.

To quickly recap Mosler’s argument, a good portion of it relies on the basic accounting fact that raising interest rates increases the interest payments on government debt. Funnily enough, if you spend any time looking at the incoherent mess that is neoclassical analysis of fiscal policy, this actually should not be controversial. Neoclassicals love warning about “debt spirals” and “fiscal dominance” — which is what Mosler argues, except that they present it in with the maximum amount of obfuscation possible. The obvious explanation for the obfuscation is that this observation blows a hole in the conventional logic about interest rate policy. The neoclassical view is that increasing interest rates lowers inflation — except when it doesn’t.

The problem for analysis is that the housing market is indeed a market. Neoclassicals love setting up models with “step/impulse responses” (as per control systems), and so they can make scientific-y statements like “a 25 basis point rate hike lowers the inflation rate by 7.3547 basis points in the following quarter.” The problem with the housing market is that nobody would treat such a statement seriously. House prices act like other risk assets — they typically march up steadily, until they drop like a rock. At best, one can hope for the Goldilocks scenario of a “soft landing.” (When you are describing your policy outlook using a character from a fairy tale, it is a safe bet that you are not working with a settled science.) 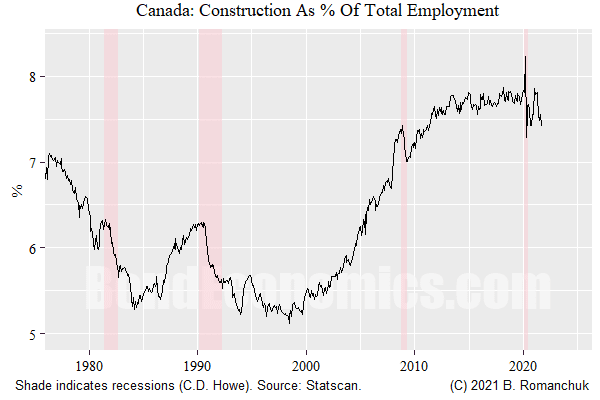 The situation in Canada offers a good example of the box that New Keynesian central bankers constructed around themselves. Construction employment (figure above) has marched to high levels relative to past history — despite somewhat sluggish population growth. Admittedly, there was considerable under-investment in infrastructure in the 1980s and 1990s in Canada, and there has been a catch-up effect in non-residential construction. Nevertheless, residential construction is perky, and a major driver of economic growth. 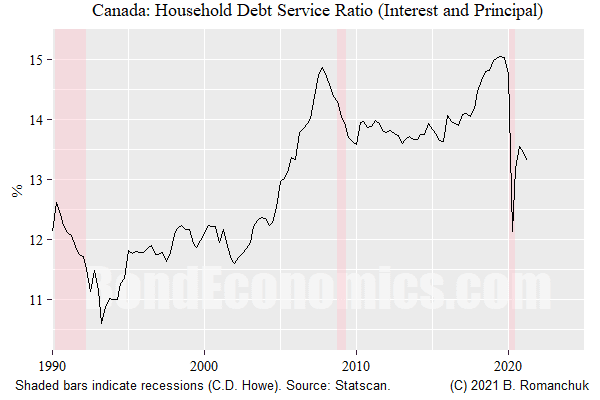 I was never too happy with publicly available Canadian house price data, but by all reports, house prices have been taking off like a rocket. This is not entirely an accident, as interest rates have being confounding the bond bears and steadily marched lower for decades. The chart above shows total debt service expenses for Canadian, mortgage and non-mortgage. (I am working from memory, but I believe that lines of credit are in the non-mortgage service component, but the only reason banks are so generous with them is that they know that borrowers have housing assets.)

The debt service burden has been stable. This is the result of interest rates dropping, as well as the reality that only a small percentage of the housing stock turns over in a given year. Anyone who bought housing years ago is in much better shape than new buyers.

The concern is that Canadians (unlike the Americans) cannot lock interest rates for 30 years. The de facto maximum rate lock period is 5 years, after which the interest rate terms of the mortgage needs to be rolled over. A secular increase in interest rates would make the debt service chart ugly. This means that the “pick a policy rate level out of thin air” — very popular among the commentators that I ignore — guesses about interest rates (e.g., 6%) tend to end up much higher than realised outcomes.

What are the Alternatives?

MMT critics love picking out MMT statements about taxes from primers, and assume that the only policy lever available is tax policy. This means that if Canada wanted to cool the economy, a tax hike is allegedly the only option.

This is not even remotely correct. The Canadian housing bubble was launched by monkeying around with the Canada Mortgage and Housing Corporation (CMHC) limits on mortgage insurance. (Under Canadian law, any mortgage with a loan-to-value greater than 80% must get insured.) If policymakers wanted to cool the housing market, all they need to do is move the mortgage insurance limits back to more sensible levels. (They did make steps in that direction, which helped slow housing in the 2010s).

Such a policy has obvious risks, but so would rate hikes. Meanwhile, adjusting lending standards would be a fine-tuned policy aimed exactly at a problem area within the economy.

To what extent it matters, my view is that inflationary pressures are largely transitory, and so I am unconvinced about the need to tighten policy. The housing market is overheating, and it is probably time for responsible adults to dunk that market in cold water. As noted, we do not need interest rate policy to do that. A broad-based tax hike would only be needed to deal with widespread inflationary pressures, which I am unconvinced about.