Back From Vacation Mode (I Hope) 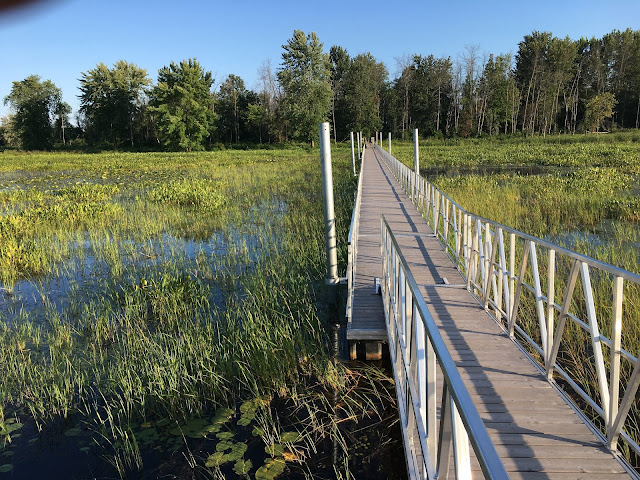 I was out camping with my family at a provincial park near Plaisance, Quebec last week, and now getting back into writing mode. The picture above shows one of main attractions — a floating walkway that zig-zags through the marsh. (Unfortunately, the chipmunks were too hyperactive to get a clear photo.)

However, it is time to get back into writing mode. I hope to get back to the inflation grind, and may or may not get a piece up ahead of next Monday.

I need to get back to watching the data flow a bit more closely, but from what I saw of the U.S. labour market data, it seems that the activity drop is still being reversed. I have no doubt that some lasting damage was done, but the prime age employment-to-population ratio is back to where it was in the middle of last cycle. The economy was a long way from overheating then (particularly since it never managed to “overheat”), but it remains tricky to guess where we will be when the economy reverts to its more usual sluggish trend growth path.

Finally, I have a longer (free) piece on my Patreon. It is somewhat off the beaten path, so I put it there. It is about another reason for my personal productivity drop — the space economic (game) simulation, Prosperous Universe.

This game overlaps one direction I want to take my agent-based model framework — to use it as an engine for a hobby video game. What I discuss are some of the issues that the designers of Prosperous Universe ran into, which set apart a video game from a straight economic model.

From an economic theory perspective, they managed to run into one of big problems that MMT addresses — price level indeterminacy. From a gameplay perspective, having the price level jump around erratically creates more interesting situations, but it is not a feature for a model you are trying to compare to developed economies. For readers that are interested, I will let you read the Patreon piece.

Email ThisBlogThis!Share to TwitterShare to FacebookShare to Pinterest
Labels: Blog