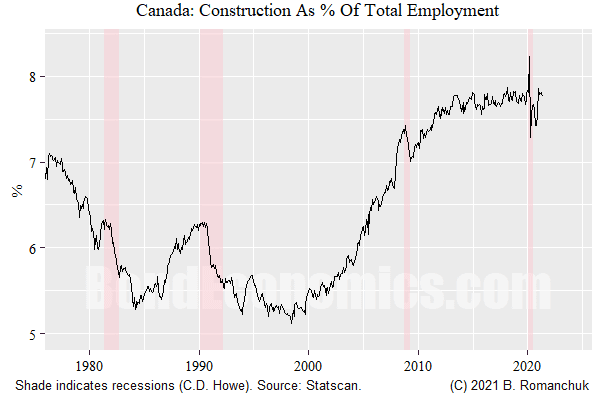 Economic data are starting to recover from the distortions created by the pandemic, and so lazier analysts like myself can get a better handle on the current state of the economy. Although I have an interest in inflation, I want to also see what is happening in the real economy.
Reminder: Feedburner email service is being discontinued in July. Please go to my Substack to opt in to the mailing list if you want to keep receiving articles by email.
From my personal perspective, it feels like Canadian housing activity has surged, although that is possibly just the result of living near a hot spot created by a station for Montreal’s new commuter rail system. I have not dug into the data myself, but I believe that Canadian house prices and debt levels are growing rapidly. (I have not looked into Canadian house price data recently, but historically, there was not a lot of good publicly available data.)
The rise in debt and average house prices was somewhat predictable. Historically, Canadian house prices were very cheap, with only Toronto and Vancouver (admittedly, two of the largest cities) standing out with relatively high house prices. I would imagine that if there were many people in the 1990s who argued that house prices in Toronto and Vancouver were unsustainably high relative to those in the rest of Canada — and they were right. However, the convergence in house prices has been the rest of Canada catching up to Toronto and Vancouver, and not those high-flying real estate markets collapsing. (This parallels what happened to assertions about JGB yields being unsustainably low versus other developed countries.)
The secular fall in interest rates also helps fuel the growth of debt aggregates and house prices. For the same monthly payment, a lower interest allows a greater principal amount. This has created greater buying power, hence greater debt notionals and house prices.
The nature of Canada’s mortgage regulation caps the debt-income ratio for households — they need to qualify for mortgage insurance. What has happened is that new buyers went from being well below the theoretical maximum mortgage service burden to hitting the limit. This is pushing up the aggregate mortgage service burden, which will hit an upper limit sooner or later. So long as people remain employed, their mortgage payments are sustainable.
As I have observed in the past (presumably many times by this point), we cannot get out a marker on a house price or debt-income ratio chart and draw the “brick wall of unsustainability.” Historical aggregates were low because houses were cheap by any reasonable metric, and they are now just moving to levels that have been sustained in high price markets for decades. Instead, we need something to upset the labour market to get worried.
If we look back at the chart at the top of this article, we see that the construction share of employment has achieved the status of a “permanently high plateau” (!). It should be immediately noted that this is all construction, which also includes commercial and infrastructure work. However, I believe it is safe to say that single-family residential construction is the most labour-intensive, given the lower efficiency.
If we looked at the decade from 2000-2010, construction was a major driver for growth, growing faster than the overall economy (as based on its demand for labour). We have reached a steady state, where construction employment is now just growing in line with employment elsewhere.
This leaves me with a mixed view. On the positive side, it is not really the case that growth is dependent upon a boost from housing — it is an important component, but not the only game in town. The negative side is conditional. If we believe that there has been too much activity in the housing market, construction is due for a reversal if something else goes wrong in the labour market. The issue is: what? The housing market shrugged off the pandemic, so what other scare story is there to worry about?
Finally, the possibility of much higher interest rates could easily blow a hole in the housing market. Historically, this was always the worry, particularly since bank economists tended to be perma-bears on interest rates. However, this scare scenario would probably require personnel changes at the central bank, given the plodding pace of rate hikes generated by New Keynesians.
Email subscription: Go to https://bondeconomics.substack.com/
(c) Brian Romanchuk 2021
Posted by Brian Romanchuk at 9:00 AM