U.S. Economy Getting Better, But... 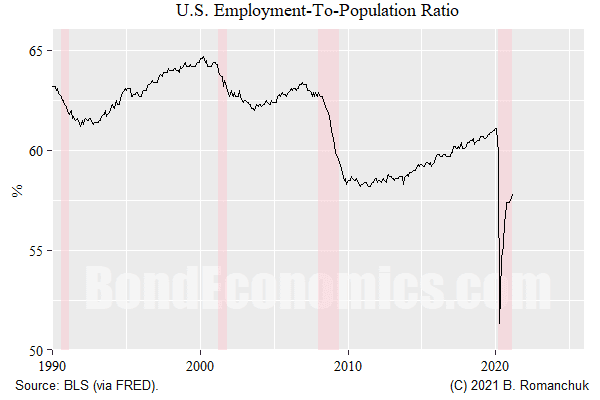 Although I expect to see fairly impressive rates-of-change in economic variables over the coming months, levels matter as well. Under normal circumstances, the economy is relatively close to its steady state glide path, and the fixed income market is quite reasonably jittery with respect to the latest growth rates. (I would argue too sensitive, but people who are paid to stare at lines all day generally want to make the backstory about those lines as exciting as possible.)
The reality is that current conditions are nowhere near normal. At the beginning of the last cycle, the only labour market series that offered useful information was the employment-to-population ratio. As the figure above shows, we are still below the lows of the last cycle.
There is a demographics story that suggests that the employment-to-population should drop as a result of the ageing population. Although true, the people who were pushing that story the hardest in 2010 were horrifically wrong about the time required for the labour market to overheat (which it never really did).
Arguably, this cycle is unusual in other respects, with supply chain disruptions. In Canada and the United States, the housing market is exuberant, and there are materials shortages. I accept that similar disruptions could blindside my rather benign inflation outlook. That said, modern developed economies have shrugged off the inflationary impacts of oil price spikes in recent decades, and energy prices are embedded throughout the entire supply chain.
From a markets standpoint, one can argue that the markets are not pricing in much tightening on a multi-year horizon. One could spin a tale that the attitudes of policy makers is different, and we are entering a structural environment that will lead to a high pressure economy. Although I can understand why people believe this, I tend to lean towards institutional inertia. That said, it seems entirely reasonable to demand a higher term premium given that risk.
(c) Brian Romanchuk 2021
Posted by Brian Romanchuk at 2:28 PM