A Rant About Base Effects 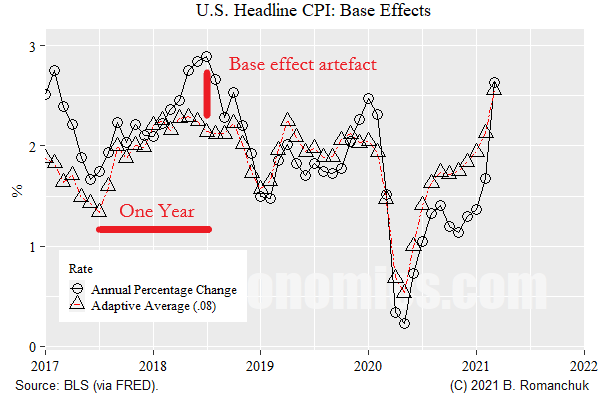 I ran across some silly commentary about inflation that did not take into account base effects. I just want to explain how to avoid this problem using elementary results from systems theory. The short version is to use a first order low pass filter, which economists vaguely label an "exponential moving average" (or something like that). Since it was used to generate "adaptive expectations," I strangely labelled it "adaptive average" in the above figure.
The figure shows two versions of the "annual inflation rate" for the United States, using seasonally-adjusted headline CPI.
(The latter calculation is to create a state variable that is updated to equal .08 times the latest value of the rate of change, and 0.92 times the previous value of the state variable. I picked the .08 parameter value via the scientific method of trying a few guesses, and see what looked coolest.)
There are two reasons to use the usual annual percentage change.
But if you are attempting to forecast (which I am not in my writings here), your focus should be on being correct, and not the ease of explanation. You should be able to work around seasonal adjustment, even if you do not lazily just grab the adjusted series (like myself).
The above figure illustrates the problems we run into with the standard method.

Unfortunately, I am supposed to be working on a consulting project, and I would need to dig up one of communications systems textbooks to give a more formal explanation. However, I will wing it here. Please keep in mind that I learned this theory around 1990, and only used it once since (when I taught a communications system course).
If we look at the specification of the annual percentage change as an impulse response (usual way of defining a filter in the time domain), we see that it is non-zero for a finite number of periods (12). That is, any change to the signal disappears after 12 periods. Such a filter is classified as a finite impulse response (FIR) filter. Conversely, the first order filter has an impulse response that is non-zero (albeit really teeny-tiny) over an an infinite domain, putting it into the infinite impulse response (IIR) category.
We can convert the impulse response of a filter to its frequency domain representation via the (Discrete) Fourier Transform, and the Inverse Fourier Transform. The cool thing about that transform in discrete time over finite intervals is that you just need to muck around with the input to turn the Fourier Transform into the Inverse Fourier Transform, and so the Fast Fourier Transform allows you to go back and forth with one efficient algorithm.
One complicated theorem used in communications systems (whose name I have completely forgotten) runs something like this: if a function is non-zero over a finite "part" of the time domain, it is non-zero over an infinite "part" of the frequency domain -- and vice versa.
There are two practical implications.
(c) Brian Romanchuk 2021
Posted by Brian Romanchuk at 11:18 AM