Does The CPI Exclude Food And Energy?

As someone who worked for over a decade as a fixed income analyst, the belief that “food and energy are not part of the CPI” is one that is the hardest to comprehend. Yet, I have seen this stated as fact innumerable times on the internet, most notably on one now-defunct website that claimed to offer the truth about the CPI. (The disappearance of the website helps explain why I cannot offer a link.)
(Note: This is an unedited draft section from a planned inflation primer.)
This has to be the easiest internet myth to debunk. You can just go to the Bureau of Labor (BLS) webpage for CPI: https://www.bls.gov/cpi/. On the day that I wrote this, the headline for the latest report read “CPI for all items rises 0.4% in February as gasoline index continues to rise” (March 2021 release). Gasoline is a source of energy and it raised the all items CPI. (The all items CPI is commonly referred to as headline CPI, since it is what is normally discussed in headlines.) The headline will be different by the time you read this, but if you read the press release, the energy and food components are typically discussed. Also, at the time of writing, there is a bar graph of the changes to various item groups, with food and energy being components listed. Meanwhile, any reliable press coverage of the latest CPI release will discuss the effect of food and energy price components on CPI for the month. 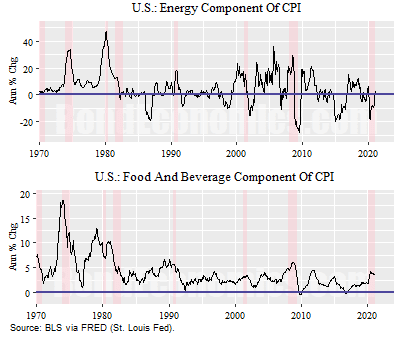 The top panel of the above chart shows the annual percentage change of the energy component of the CPI, and the bottom shows the food and beverage component. And note that I am far too lazy to make up fake series to cover up for some conspiracy.

How Can This Belief Exist?

I grew up in the 1970s in Canada, and inflation was a big deal. Jokes about inflation even made it into comic books, some of which I had to explain to my kids when they were passed down to them. Meanwhile, the choices for media were limited, and so one heard news reports about inflation. The effect of gasoline or food prices were commonly heard. Even if you were not a fixed income analyst, you knew that food and energy were part of the CPI.
My feeling is that the fragmentation of media as well the collapse in the fascination with inflation by most people is the only way a belief that CPI excludes food and energy can persist. As I will discuss later, there is a plausible route for this belief appearing, but it still takes a general absence of discussion of inflation data for it to take root.
The other thing to keep in mind is that I have only seen this in internet chatter, almost entirely from libertarian sources. It is entirely possible that they write this to yank the chains of the “libs,” although there is also a decent amount of conspiracy mongering. Such thinking did not arise with the internet; the John Birch Society pushed the belief that President Eisenhower (the Supreme Commander of the Allied Expeditionary Force in World War II) was a communist.

The Roots of this Belief?

The most likely trigger for this belief was the widespread use of core inflation by economists. The definition of core inflation (in the United States at least, other countries can use variants) is inflation once we exclude food and energy. The BLS calculates core inflation – along with other alternate indices – but headline CPI is the measure that is used in indexation calculation (such as in TIPS – inflation-linked bonds). 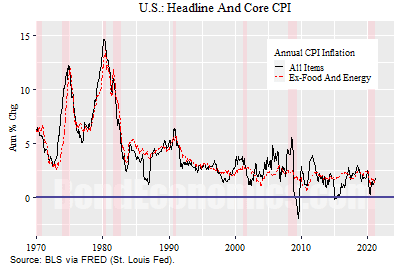 The above chart illustrates why economists like to use core measures of inflation – they move less, certainly in recent decades. The two inflation rates were relatively close to each other in the 1970s, but we saw that headline inflation collapsed in the mid-1980s when the oil market crashed. If we look at the low inflation era that started around 1990, we see that core CPI was fairly sticky around 2-2.5%, while headline inflation was more mobile. The oil price spike before the 2008 Financial Crisis led to relatively high headline inflation, but then swung to deflation once the oil market collapsed along with the financial sector. (The U.S. recession started in December 2007, ahead of the top in oil prices, and before the worst of the Financial Crisis, when Lehman Brothers failed.)
Most of the difference between headline and core inflation results from energy price swings (mainly gasoline). If you refer to the earlier figure that showed energy and food price inflation, we see that the total food and beverage index has been less volatile, peaking at around 5% (much less than the 20% swings seen recently in the energy index). The lower volatility of the overall food component of the CPI is a common feature of developed economies – the “food away from home” component has been increasingly important. This is mainly restaurants. Meanwhile, even in grocery stores, shelf space is moving more and more towards processed or prepared foods. Dual income families have less time to cook. The more processing and serving costs that are built into food, the more stable prices are. It is only whole foods (particularly fresh fruit, vegetables, fish, and meat) that have the characteristic commodity price volatility. In countries where diets do not rely on highly processed food, food price inflation is a greater concern.
The lower volatility has led to the suggestion that it makes no sense to exclude food from the CPI to reduce volatility, rather we should just exclude energy. This matches how I analyse inflation in the short-term, and I am just reflecting what was the consensus methodology within inflation-linked trading. That is, you forecast the rest of the CPI using whatever jerry-built economic models you are comfortable with, and then had to deal with the crude oil outlook. Gasoline prices are less volatile than crude oil as there is a refining spread, as well as markups for distribution and retailers, but crude oil price movements will filter through. (If you are an inflation-linked bond trader, you need to familiarise yourself with energy markets.)
The focus on core inflation by economists might be justified (discussed next), but it certainly annoys people when gasoline prices are spiking. If you were short inflation-linked bonds based on an economist’s views but then oil prices spike $75/barrel to $150/barrel, you do not want to hear how core CPI has not moved much. My guess (shared by others) that complaints about economists – many in the private sector – ignoring food and energy in the CPI led to the belief that CPI itself excluded food and energy.
That said, economist chatter has changed tone since I started in finance in the late 1990s. The core inflation measures were viewed as unsatisfactory (largely due to the arbitrary nature of the exclusion), and more emphasis was placed on using statistical means to reduce short-term volatility in inflation measures (to allow an extraction of the underlying trend). This includes things like the median CPI (TK – section reference). I still prefer to use core inflation, since it is easier to understand, and allows us to decompose inflation dynamics into two buckets.

Are Economists Correct to Look at Core?

Although looking at core inflation has problems for short-term problems, if we are looking at long-term trends, the use of core is somewhat vindicated. From the perspective of a Peak Oil believer, there is an argument that the post-war experience was misleading, but that is a debate that is too speculative for this text. 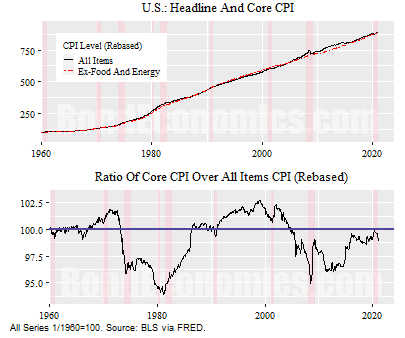 The figure above shows the relative evolution of the core and headline measures for the United States since 1960. The top panel shows the levels of the two indices – after rebasing them so that they equal 100 in January 1960. In January 2020, the rebased index was roughly equal to 880, implying a growth by a factor of 8.8 over 60 years (roughly a 3.7% annualised average inflation rate over that era). We can see that the two indices stuck close to each other.
The bottom panel offers a more useful comparison. I divided the core CPI by the headline measure, and rebased the ratio to 100 in January 1960 as well. (Why 100? It is easier to read off percentage changes. If the ratio moves by 2 units over a period, that is (roughly) equal to a 2% growth difference.)
As one might expect, the ratio moved significantly over the 1970s – the first oil shocks. However, the outperformance of food and energy reversed during the commodity bear market the 1980s and 1990s. We then had another bull and bear market in energy, leaving the ratio series just over 99 in the year 2020. That is, the two series tracked each other with a deviation of just under 1% over 60 years.
The experience of the 1970s suggests that we cannot ignore energy prices when discussing the CPI. At the same time, we see that the relative price shifts tend to eventually cancel out, and it is probably a mistake to over-react to energy price volatility. The classic case of over-reaction to energy prices was the boneheaded decision by the European Central Bank to hike interest rates in the summer of 2008 – when the European banking system was already facing severe funding stress.
The relatively low weight of food and energy within the CPI is one explanation for the closeness of movements of headline and core CPI. Food and energy are purchased at a high frequency, and gasoline prices are literally the most visible retail prices. This gives food and energy a much higher psychological weight than their actual weight in averaged expenditures (the basis of CPI weights). As soon as any one of these prices jumps, an inflation worrier will be complaining about it.

The belief that the CPI does not include food and energy is a great example of how faster and freer information transmission does not imply a transmission of knowledge. The only justification of this belief is economists’ focus on core CPI instead of headline, but that just reflects how economist discourse can end up diverging from outsiders’ perspectives.