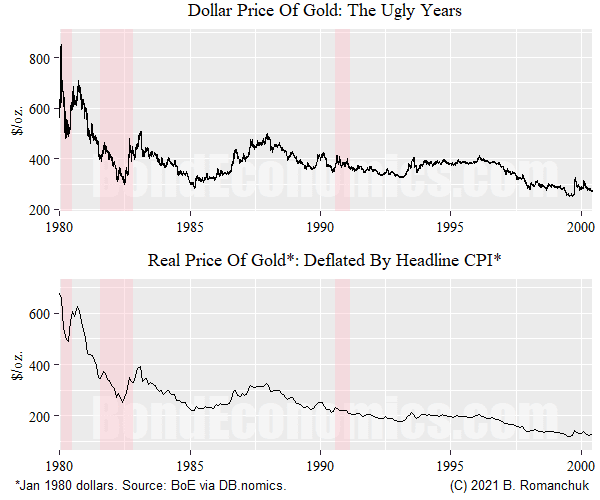 The recent rise of Bitcoin (BTC) has brought a new wave of triumphalist propaganda across the internet, along with annoyed responses by critics. My view is that BTC is a speculative trading vehicle without any economic significance, and I prefer to look at markets from a value perspective. As such, I see little value in discussing it. However, in addition to wishful thinking from BTC backers, critics of BTC are also falling prey to the assuming that what ought to happen will happen. Although things could go south for the crypto-currency, it is not that deep an insight to argue that BTC has carved out a niche as the new gold -- with certain advantages for speculators.

I started my non-academic career working for an independent financial research firm in 1998. The firm had pivoted to institutional research from being a typical investment newsletter in the early 1980s, but it still had clients from a base that overlapped other newsletters, many of which were gold fanciers. The rise of the public internet disrupted business models for newsletters, but there was a core industry built around being a fan of free market economics, precious metals, and predicting an inflation outbreak any minute now.
A focus on gold was somewhat laughable to many of us in the markets that had access to price data. The chart at the top of this article outlines the ugliness of gold price action: it lost value in nominal terms and was absolutely crushed in real terms. Gold was only a "store of value" in the loosest sense of the word: its value had not gone to zero. Of course, relative performance versus stocks and bonds was catastrophic, given that they were in generational bull markets.
Despite this utter failure as an investment thesis for 20 years, the gold fanciers persevered -- and were rewarded by a renewed bull market that starts just after where I strategically lopped off the time axis.
The takeaway: the industry behind gold was able to survive price weakness for a very long time.

Bitcoin has been marketed as digital gold, but it is even better as a speculative vehicle. The premise behind gold is that it is a tangible commodity, and so its value is supposed to be stable in real terms. (Sure, there can be 20 year swings in valuation, but we have long investment horizons!) Although hedging inflation is a nice property for asset allocators, a 0% real rate of return does not look that good versus equities (or even bonds, at least before the New Keynesians went nuts).
The expectation of relative price stability also dampens the ability of gold or silver longs to ramp prices. Sooner or later, the large stock of existing holders who have only limited expectations for gold prices will dump their holdings into the ramp. This supply by the sidelines snuffed out the early 1980s run, and central bankers earned the eternal enmity of gold fans by liquidating reserves throughout the 1980s and 1990s.
Bitcoin is not burdened by having its price tied to anything, nor are non-believers holders. The sky is the limit, and the only overhang is due to believers profit taking -- hence the earnest injunctions to "hodl."
(And if one is sufficiently delusional, one could worry about the effect of gold mining on asteroids.)

One problem people have with markets (and other things) is that we want events to fit a moral narrative. If something ought to happen, we expect it will happen.  Although this is a nice device for fiction, the real world is messier.
One classic "ought" belief that clouds judgement is the survival of the Quantity Theory of Money. If the monetary base increases, the price level ought to rise -- it seems unfair otherwise. This is a fallacy that a great deal of the hard money narrative relies upon.
Going the other way, there are a lot of reasons why one might be critical of BTC. From this perspective, it would be nice if it ended badly -- but there is no guarantee that is how things will work out. The rest of this article will finish off with a few ideas that I see floating around among detractors of BTC.

Why not Create Another Crypto?

The usual reaction of anyone who is not in the crypto camp is to ask: why pay anything for a unit of an existing crypto-currency when a new currency can be created?
The reasoning why not is straightforward: BTC is a pyramid scheme, not a currency. The driving economic force is for existing holders to proselytise new members into the scheme. The new members in turn hope to recruit other members. The large existing holders have the financial capacity and incentive to bankroll conferences, researchers, etc. In order to take part in the gravy train, you just need to stick to the narrative.
Since there is no price limit for BTC, it is obviously detrimental to attempt to inflate another pyramid. Meanwhile, if BTC collapses, that would likely take out the entire crypto-currency narrative. Therefore, most people keep to the same bullish BTC script.

Energy Use Is Voluntary

The amount of energy used by BTC mining has been a major topic of debate. It seems safe to bet that electricity and server hardware purchases are made with real money, hence the miners have to be investing real money, or liquidating BTC to meet cash flow needs. This represents a continual drain of real money from the BTC ecosystem. It is being met by new inflows now, but at some point, this cash flow drain will exceed desired inflows.
The implication is that BTC price has to top out. However, the long-term implications of this may not be too large. If miners scale back server capacity, the complexity of calculations scales back. Presumably, electricity usage will settle into some kind of range -- admittedly far in excess of what traditional finance would consume to process the trivial amount of transactions that BTC deals with.

Leverage Will Leave A Mark

From my outside, uninterested perch, it appears that the crypto trading community is resorting to various schemes to leverage their positions. This is exactly what any reader of Minsky would expect to happen.
To what extent leverage exists, it will magnify the chaos on the other side of the price peak. This would certainly cause misfortunes for the people involved, but it is unclear how much this matters for the BTC community in general. Early adopters did not need to use much leverage, and to what extent they harvested some gains, they might be able to absorb some forced selling.
I refer the reader back to the chart at the top of the article. Leveraged gold positions in the early 1980s blew up. This explains the initial sharp losses after the bubble pop. However, the gold market still existed, and gold fanciers still stuck with their calls for imminent hyperinflation. Bitcoin is a concept, not a firm, so the parallels to the Tech Bubble of the late 1990s break down.

Having things end badly in a more definitive sense would likely require something that impairs the ability of BTC to recover its losses. One possibility would be some sort of technical weakness that causes people to abandon the concept. Another would be a regulatory crackdown that curtails the ability of BTC to draw in new money. It would wither to being a player on the dark internet.
Given that the only use cases for BTC that make economic sense involve evading laws and regulations, it is not too hard to imagine a scenario where money flows are cut off by regulators. On the other hand, there are many in the financial sector who see a profitable new trading platform.

On both sides of the debate, there seems to be a general hope that something interesting will happen with Bitcoin. Although prices are likely to remain volatile, it can easily remain a niche collectable.
(c) Brian Romanchuk 2021
Posted by Brian Romanchuk at 9:00 AM