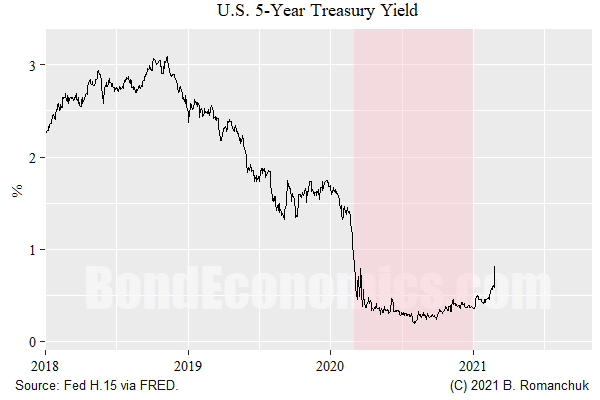 The sell-off in government bond yields has attracted a fair amount of excited commentary. The subtext is that something interesting is going to happen. From my perspective, the safe bet in (non-euro!) developed govvie bond markets is that boring is the safe bet. Thus far, with the limited data that I have available, I do not see anything that is interesting from a systemic risk perspective.
I will start off with a disclaimer. Since I do not offer free investment forecasts, I certainly cannot say that I predicted this sell-off. Furthermore, there is no guarantee that this is the end of the process -- perhaps some corner of the markets will blow up in a more convincing fashion. Finally, I have no idea how risk asset markets will react to higher bond yields. My view is that if the stock market cannot survive this level of bond yields, that represents a fundamental problem with equities.
The figure above shows the rise in the fitted 5-year Treasury yield, from the Fed H.15 data, which ends Thursday. It is entirely likely that intraday pricing based on the 5-year benchmark might give rise to more volatility in the chart.
Although some commentators have argued that this is the bond market defying the Fed's embrace of average inflation targeting, I am unconvinced. I think most estimates of the term premium are weak, and that the 5-year ought to have a steady positive term premium. If we lop off a reasonable premium, current pricing is consistent with the Fed on hold for a couple of years followed by a rate hike campaign. Whether or not that timing is a mistake is unknown, but it is not more aggressive than the clown fiesta that was rate hike pricing in 2010.
The pricing is consistent with a conventional view of how interest rates work. Even if the Fed deliberately lags the cycle, they will need to "catch up" to inflation thereafter. I am not a huge fan of that conventional story, but then again, I am not in charge of a large portfolio. 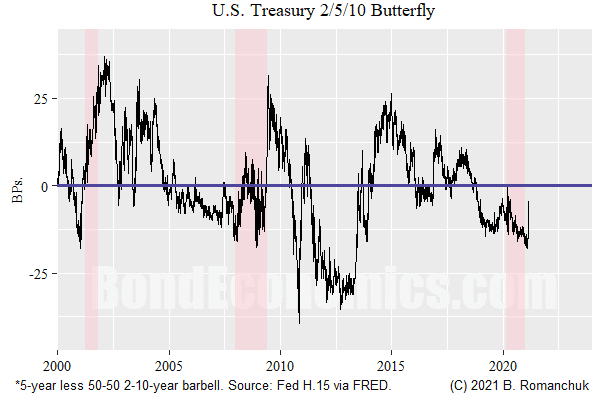 I saw discussions of the 2-/5-/10-year Treasury butterfly. Using the Fed H.15, the above shows the 50:50 butterfly spread (5-year bullet less the 2-/10-year wings). Although the one-day move was violent, this is not exactly unprecedented when looking at this time series. (And if we go further back in time, the butterfly can get choppier, but the question is whether that is an artefact of the fitting methodology.)
I do not want to dwell on what the butterfly represents, but one overly simplistic view is that the spread is an absolute measure of richness/cheapness. (To be clear, that's not correct, but work with me.) Using that simplistic theory, the 5-year was "expensive" versus the 2- and 10-year points on the curve, and then it got a lot less expensive very quickly. No matter how pedantic one wants to be about the definition of rich/cheap, the reality is that the spread snapped towards the 0 level, which is consistently crossed. This is different that the spread snapping towards extreme levels, which is the usual signal that something blew up in relative value land.
The butterfly spread has no economic significance in itself, but it is important for rates trading. It is a way of making a relative value position without significant directional exposure to either the level of rates ("duration") or the slope of the curve. Since butterfly spread movements are small, you need to apply leverage to the position to get any returns juice. As such, one could imagine that some levered player did blow up somewhere.
However, there is no credit risk or even inflation risk involved. Real money fixed income investors can lean into butterfly movements solely by over-weight/underweight positions -- no leverage needed. So the butterfly spread cannot run off to far without being smacked back into place.
Maybe there are problems in the vol world, but I do not have the data to comment on that.

Another favourite story pushed by bond apocalypse fanciers is the dreaded convexity hedging. Yes, convexity hedging in the United States adds a nasty positive feedback loop that accelerates movements, and results in overshoots. However, the effects are finite, and having rates overshoot implies that rates snap back later.
The reason it happens is that residential mortgage back securities with fixed, pre-payable loans are a major component of the U.S. fixed income market. (Not really a feature of most other fixed income markets.) Households are long an option -- the mortgage is effectively callable. This has the nasty effect of reducing the effective duration when yields fall, while the duration extends when rates rise. Entities that hold MBS versus fixed rate liabilities (either borrowing, or a fixed income benchmark) need to manage that optionality. This generates a positive feedback loop -- as has been highlighted in the Wall Street Bets shenanigans.
However, this effect only exists if large entities are delta-hedging mortgage optionality. By all accounts, the size of hedgers' balance sheets has shrunk. For example, the Federal Reserve does not delta hedge its holdings, so they effectively took a lot of nasty exposure out of the market.
Rates overshoot, but that is nothing to get excited about.

Bond markets have tendency to switch between two regimes. Most of the time, they sedately trade in ranges. They then rapidly reprice to enter a new regime, possibly with an overshoot. This is the worst possible environment for traders who use technical analysis.

My bias is that structural trends towards mediocre growth and contained inflation are extremely hard to dislodge. This view could easily be described as complacent. Stories about structural changes in inflation are more plausible now than they were in past decades, but at the same time, we need to keep in mind the track record of inflation alarmism. Since I am not pretending to be a forecaster, I am not going to waste the reader's time discussing hypotheticals.
(c) Brian Romanchuk 2021
Posted by Brian Romanchuk at 1:51 PM