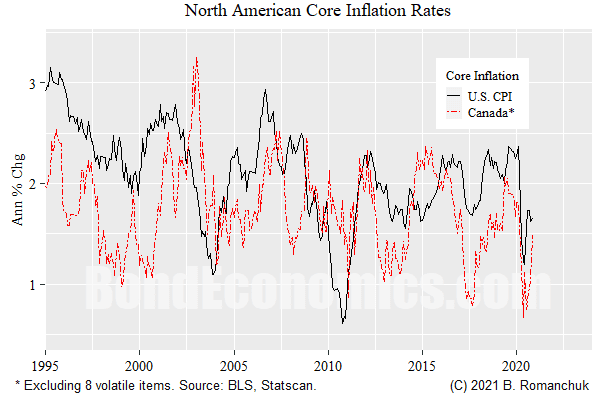 A recent controversy that erupted was the question as to whether transfer payments (such as the $2000 transfer that was debated in the United States) would cause the economy to overheat. There is an interesting issue: even if $2000 is not enough, what about larger amounts? I have severe doubts that anyone could give a useful answer to what appears to be a simple quantitative question, without a country pushing the envelope for the sake of an economic experiment.
Larry Summers raised this question in a recent op-ed that was dunked on by pretty much my entire Twitter timeline. When I read his piece, I have sympathies with the argument that preventing a collapse in unemployment payments would be a higher priority than a fresh transfer payment. That said, there is nothing stopping pursuing both policies. However, I do not have enough information to say what amount would be a sensible amount to pay, so I am not in a position to pass judgement on Summers positions versus his critics.
Nevertheless, it is interesting that mainstream economists cannot easily answer the question of what level of transfer payments would cause overheating. The ability to answer such quantitative questions is exactly why highly mathematical economic theory was pursued, and more qualitative approaches pushed into the dustbin of editors at mainline journals. To be clear, I am not advancing an inflation model that can answer that question, so my concern is not that they cannot give an answer. Rather, the issue is that an inability to provide a quantitative answer is exactly what heterodox critics had been saying for a long time, only to be met by the response "where is your model?"

I would argue that there are two main approaches to getting a quantitative answer to this question.
The issue with the first approach -- fitted models -- is that the fitting has happened in a completely different institutional environment. One could try, but my guess is that it would be a garbage-in, garbage-out exercise. (The justification for that assertion follows from my back-of-the-envelope discussion, which is the remainder of the article.)
The issue with back-of-the-envelope approaches is that each simple theoretical model will give different results. Since it is hard to calibrate against historical data, there is no way to test the candidates in advance. We need to use historical episodes -- and we are getting some data points based on the events of 2020.

The Problem of Inflation

Most empirical analysis of fiscal policy revolves around the issue of multipliers. Different models suggest different multipliers, based on assumed theoretical characteristics of the economy. (In fact, this is what I would suggest.)
Unfortunately, there are two issues with this approach.

The observation that multipliers would be different in the current environment is well known. With activities closed, even if people want to spend on certain goods or services, they cannot. Meanwhile, businesses that are closed by health edicts are not going to hire, no matter the situation of aggregate demand.
Although medical news has deteriorated markedly in the past month in many areas (including my home province), one has sympathies with a story of a rapid demand increase once vaccine rollouts hit (along with the warmer weather in Northern Hemisphere which coincided with school closures and lower infection rates). So, "the" multiplier might change rapidly.

Simple models that rely on a single good (or aggregated continuum of goods) naturally lead to a tight link between production levels and production constraints. In the real world, that linkage breaks down. For example, digital services often have a negligible cost of increased production. (At most, new servers might be needed.)
This leads to the divergence between post-Keynesian and neoclassical inflation theories. Neoclassical models rely on supply and demand curves, along with some arbitrary price stickiness. Post-Keynesians emphasise that most prices are administered.
Both approaches can come up with an explanation as to why the previous rounds of stimulus have had no inflationary impact (as demonstrated by the chart of U.S. and Canadian core inflation at the top of this article) -- despite the household support programmes involving REALLY BIG DOLLAR AMOUNTS.
Given that these stories are fairly similar, I see no obvious way to distinguish them.
Returning to the original question, we need to ask: why would another round of stimulus be any different? So long as the payment is roughly comparable to average households' monthly mortgage or rent payment, it is likely to be absorbed there. Since it is hard to see an immediate hiring binge this far away from vaccine rollouts, second round effects are likely to be muted.
My view is that we could only see more significant effects if the payments are converted to be permanent flows. At which point, those flows need to be compared to regular employment income, and see how significant they are.

One can come up with a reasons to not worry about the inflationary impact of one-time payments, particularly when it is hard to spend on many items. There are obviously limits, but the limits may be far higher than what squeamish politicians and policymakers can stomach.
The story is different for permanent flows. It seems reasonable to believe that the U.S. Federal Government could pay all adults $100/month and the inflationary impact would be close to diddly squat (to use the technical econometrics term). This is less clear once we hit the $1000/month threshold, since that is an income that is a significant portion of many household incomes. My argument is that you would need an actual programme to calibrate numbers closer than that, but the key point is that the metric that matters is the comparison to typical income levels.

One of the more amusing parts of Larry Summers' op-ed is that he flipped from a secular stagnation story to one where inflation could take off like a rocket as a result of a one-time payment. Not exactly a secular force if it can be defeated by a single policy step.
This is the problem with any "secular" inflation story, such as the ubiquitous demographics arguments (that are just dual y-axis charts with average ages and inflation). There are many structural factors that coincided with the inflation round-trip from the 1970s-2020s in most developed economies. However, it is a hard sell that demographics (or whatever) can prevent inflation if fiscal policy ramps up.
(c) Brian Romanchuk 2021
Posted by Brian Romanchuk at 11:12 AM