Rising Interest Rates Is A Good Thing For Governments

Worries about the effects of rising interest rates on government finances is a standard feature of editorial pieces. However, a floating currency sovereign should not be analysed in the same way as a household or business. An individual should reasonably worry about the effect of rising interest rates on their finances; if they face financial failure, the side-effects are not enough to affect macro outcomes. This is not the case for a central government: interest rates reflect macro outcomes, and the analysis needs to take into account why interest rates are rising.
A recent article by a Canadian journalist motivated this discussion. Although Ken Boessenkool's article "Money's not for nothing" has some obvious weaknesses, it has the advantage of laying out clear logic. Most pro-austerity arguments rely on vague, unquantifiable threats. The concerns are fairly standard: the Canadian Federal Government should fear rising interest rates, in the same way that a household would.
Although this article is responding to discussions about the Canadian government, it probably applies to most of the "Anglo" developed economies.

Central bank mandates are to target inflation, not to bankrupt central governments because they do not approve of fiscal policies. Given the inability of inflation to rise since the early 1990s -- and the consistent forecast failures by inflation hawks -- there is no particular reason for central banks to be jumpy about inflation.
Although opinion pieces are filled with wailing about particular prices rising, consumer prices can only durably rise if consumers can pay for the more expensive products. Although there are potential stories that support this narrative (e.g., central government transfers raised aggregate incomes in the second quarter, despite the lockdown), the question remains how durable these trends are.
Admittedly, suggestions by the Canadian Federal Government that transfer payments will rise does offer a somewhat plausible scenario for rising inflation, but it remains to be seen how expansive fiscal policy will turn out to be.
In any event, we need to see rising inflation, which implies rising nominal GDP. From the perspective of an analysis of the debt-to-GDP ratio, this means that the denominator is rising rapidly. The main taxes levied by the Federal Government — income taxes and the value-added tax — would mechanically rise. Meanwhile, the duration of central government debt is not zero, and so it will take years for the weighted average interest rate on government debt to rise.
In other words, a rising debt-to-GDP ratio is the last thing to worry about in a transition to a higher inflation environment.

QE: No Reason to Reverse Rapidly

With that background out of the way, we can examine a few of Boessenkool's points. His first refers to the expansion of the Bank of Canada's balance — quantitative easing — which is a novel policy for Canada.

And in fact, central banks around the world have been printing money — which is what this practice amounts to — to protect their populations. The U.S. government engaged in a massive amount of this activity after the 2008 financial crisis and that all seemed to work out fine. As the debt held by the central bank expired, buyers appeared to take this debt off their hands. And when the buyers didn’t materialize, the Federal Reserve refinanced it by printing another batch of money.
So we’re fine, right? Money for nothing, and your cheques for free.
No.
First, the government debt bought by the Bank of Canada will expire. It is all of relatively short duration. And when it expires the bank can sit back and relax as private markets scoop up the debt.

I believe this is a fairly common concern — sure, the central bank can buy the debt now, but what happens when in matures? 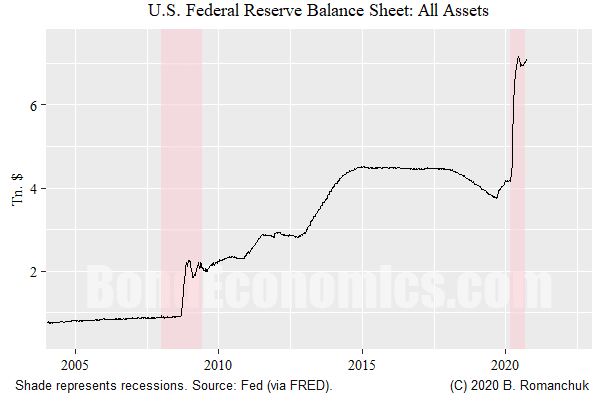 However, we do know what happens. Central banks always have had to maintain their balance sheet sizes, and there were a number of test cases of quantitative easing over the past decades. They just roll over maturing bonds in their debt portfolio, like every other large bond holder. Whether or not the policy makes sense, the size of the central bank's balance sheet has been turned into a policy variable. As the figure above (showing the Fed's post-QE trajectory), the central bank attempts to slowly shrink its balance sheet size once the recovery is underway.
Once again, the mandate of the central bank is to target inflation. Disrupting the housing market rapidly rising mortgage rates is not going to help a central bank that is likely to miss its inflation target on the downside (unless the Liberal government is serious about fiscal easing).

Unsurprisingly, the "reserve currency" and currency weakness show up in the logic.

The sheer amount of debt refinancing that markets will be asked to refinance in the coming year will be immense, gargantuan, stupendous. And markets get to chose whether to buy American, German, British, French, Canadian, Italian or Greek debt.

That is not how bond markets work; to buy Canadian bonds, they need Canadian dollars. Those Canadian dollars were already injected into the Canadian financial system by deficit spending. If an international investor wants to buy a Canadian bond, they need get those dollars from an existing holder. (This logic applies to all the currency blocs in the list above.) The risk that is normally of concern is that investors will shun the Canadian dollar, causing its value to fall.
Back in the 1990s, economists wildly over-estimated the effects of currency weakness on domestic inflation. However, it is clear that weakness in the Canadian dollar has extremely mild effects on inflation. As such, there is no particular need for the Bank of Canada to over-react to currency moves.
Meanwhile, Canada has been placed in a highly vulnerable position as a result of making private sector growth largely a function of a housing bubble. A weaker Canadian dollar boosts exporters, creating the theoretical possibility of rebalancing the private sector away from housing. In other words, this is actually a good thing.

The rest of the article mainly consists of an appeal to central bank independence. The argument being that rates are low because of Federal Government vulnerability to higher rates. 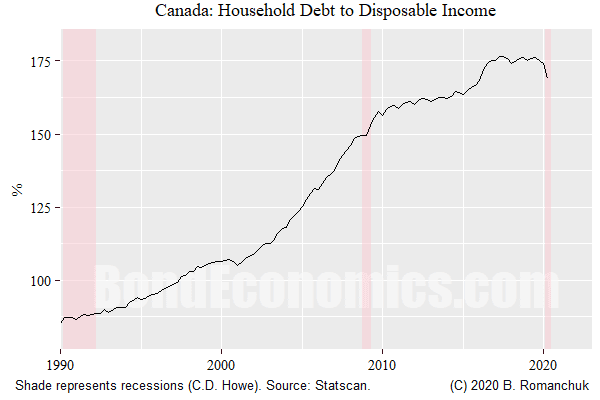 This is a fairly basic misreading of the situation. The household sector is far more vulnerable to rising interest rates. The chart above shows the debt-to-disposable income for the Canadian household sector. (The dip down at the end reflects the transfer payments of the second quarter). With that ratio tracking bouncing around 175%, we see that there is a very large sensitivity to interest rates. At the same time, Canadian households only lock interest rates for a maximum of five years. (It is possible to get 10-year fixed, but that is expensive and thus rare.) We can then add into the outlook that residential construction jobs are a big part of income growth, which is vulnerable to higher rates.
The Bank of Canada is boxed in because of debt, but Federal Government debt is not the source of concern.

The only plausible scenarios where Canadian interest rates are rising involve wage growth being sufficiently strong to absorb the drain of increased household debt service. Although this might make hard money aficionados unhappy, this means that the Canadian economy has avoided being crushed by mortgage debt. The central will have escaped the gravitational pull of the zero bound.
The alternative is the status quo:  low income growth co-existing with big balance sheets and near-zero interest rates.
Given that how to escape from the zero bound has been the main topic of economic debate for about a decade, we see that the worries about Federal debt servicing are flipped 180 degrees from actual pressing problems.
(c) Brian Romanchuk 2020
Posted by Brian Romanchuk at 9:00 AM