From the perspective of a fixed income practitioner, the easiest way to interpret dynamic stochastic general equilibrium (DSGE) models is that they are a form of arbitrage-free pricing models, albeit with a novel definition of arbitrage. This is not too controversial, as DSGE models are an extremely wide classification of models, and pricing models are one recognised sub-category. The issue is that if we look at DSGE macro models -- models which have some resemblance to a core real business cycle (RBC) model -- they inherit some of the limitations of such models. Furthermore, since there is no way to engage in such arbitrage trades in the real world, one is faced with the question why one would insist upon the required mathematical complexity needed to support them.
(Note: this article follows up one that discusses arbitrage-free pricing for fixed income instruments without optionality. It is a digression within a cycle of articles about DSGE macro models that I outlined in this piece. The arguments here are somewhat orthogonal to the discussion that will appear in other articles, but they do explain how I visualise these models. My feeling is that there is too much mysticism attached to these models, and so one needs to understand the big picture before going after more technical arguments.)
The roots of this discussion is a remark made by Warren Mosler in conversation, which was something along the line of "DSGE models are just arbitrage-free pricing models." Although I am hardly a fixed income pricing guru, I was able to pick up on the implications, which this article spells out in more detail.

What is a DSGE Macro Model?

My interest are in macro models -- models which attempt to find a trajectory for the overall economy. There are many possible structures, but I am not concerned about asset pricing or some microeconomic model that analyses some subset of the economy (such as a profit-maximising firm). The DSGE acronym is imposing, but it is easily understood.
Although many structures of DSGE models exist, I am mainly considering ones that have some similarity to RBC models. There should be one (or more) representative household agents that are maximising utility on a forward time axis by selling labour hours and purchasing consumption goods. In order to be interesting, there should be a business sector that sells consumption goods, which are produced by hiring labour hours, and output is determined by a production function. There is normally a central bank with an interest rate rule, and fiscal policy that is somewhat of an afterthought.

The model solution represents spot and forward pricing in a number of markets, typically the following.
If we tried to align this with the real world, we note that the first market overlaps the central government bond market, and the second looks like the inflation trading market. However, the real-world inflation trading market is cash-settled, based on an index, while the DSGE market is supposed to be physical delivery. The last market -- the labour market -- is not traded on a multi-year forward basis.
The notion of being arbitrage-free are not the same as in financial markets. The key difference is that the labour and product markets are physical delivery, and short-selling is not permitted. The rules for being arbitrage-free are modified to reflect this.
The no-arbitrage condition is that the solution has to be such that no trades can improve on objective functions (business sector profit, or household utility).

Production functions relate real inputs ("capital" and labour) to real output. Since capital in a period is assumed to be inherited, the dollar output unit cost scales with wages. The no-arbitrage conditions only pin down relative prices (e.g., price of goods now versus the next period), with the exception of the bill market (since a zero maturity bill is money, and has a price of 1).
This is entirely normal behaviour for an asset pricing model. One of the key outputs of the model is to pin down hedging ratios. However, we are not that interested in hedge ratios in hypothetical labour and composite good markets.
This also leads to a technical issue of interest to Modern Monetary Theory (MMT). As Warren Mosler emphasises, this creates price level indeterminacy within the model. One of the key theoretical contributions of MMT is that it provides a natural mechanism to pin down the price level (the Job Guarantee being the strongest mechanism). Neoclassical models generally need to introduce kludges that are theoretically incompatible with the theory to pin down the price level.

Other than the bill/forward bill market, there are no markets corresponding to the model markets.
This creates a major plausibility gap.
When we look at fixed income markets, arbitrage-free pricing works extremely well as description of reality as all major market participants are aware of pricing, and they are also all aware of the concept of arbitrage-free pricing. Everybody sees the same discount curve and volatility cube, and their day job is hammer either if they appear to get out of line with what is seen as reasonable.
The situation for a hypothetical macro arbitrage trader is much worse. Not only are the forward prices (other than bills) not observable, nobody can trade the instruments. They can only trade their particular labour skills, or firm output. The lack of visible pricing means that nobody really knows where their own private beliefs are relative to the aggregate.
There are a great many long-winded heterodox critiques of equilibrium concepts. Realising that they are an overly complex mathematical black box that generates arbitrage-free pricing for non-existent markets implies that there is a great deal of wasted theoretical effort. From this perspective, it is easy to understand why neoclassical economists are taking an extremely long time to "prove" observations that were obvious to economists in the 1950s.

Although the plausibility issues around equilibrium theory are well known, my argument is that there is an under-appreciated issue with empirical analysis. Arbitrage-free pricing ensures that forwards are internally consistent, but the passage of calendar time is not the same thing as the forward time axis. 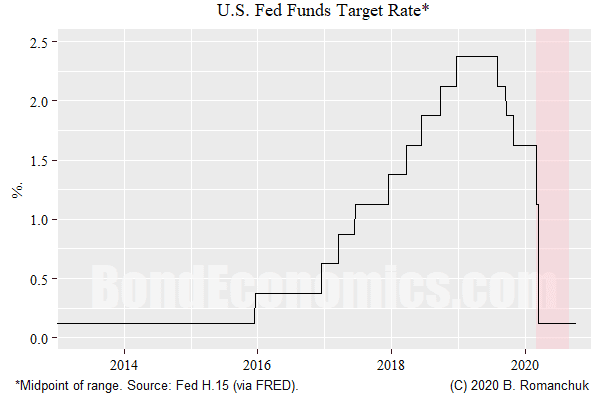 The figure above (shown in the previous article about fixed income pricing) offers a visual explanation of the problem. It shows the trajectory of the Fed Funds target rate (technically, the midpoint of a band) since 2013. It is flat at a near-zero rate, rises quickly, and then reverses back to its lower limit. It is a safe bet that no instantaneous short rate curve would ever resemble this trajectory. One might attempt to pin it down with option prices, but the expected correlation of forward rates would make an outcome similar to this trajectory a low probability outcome. (We would need fancier fixed instruments to asses this, if one infers a probability distribution from swaption prices, we could assign a probability to being near any particular forward point. We would need to price an instrument that has some form of path dependency.)
Since there is an interest rate curve embedded in the model. if a DSGE model is properly calibrated to real world data, it should reproduce the forward curve. (I am unaware of anyone attempting such a feat, but I have long given up on monitoring the literature.) As such, it should inherit the empirical properties of forward curves: extremely smooth trajectories for expected variables. The discussion of DSGE model trajectories is consistent with this: variables are generally expected to revert to some time of steady state.
As such, we should expect the behaviour of DSGE forward trajectories to be qualitatively similar to interest rate forwards: subject to massive re-pricing when conditions change. The statistical properties of forward trajectories are not the same as observed interest rates as measured in historical time. This might be termed "time inconsistency," but that phrasing has been associated with the analysis of policies, and not models themselves.
If we had a perfect model of the real world, we would not face a time inconsistency issue. That is, if we take a particular model and assume its descriptions of stochastic shocks is correct, it would probably be time consistent. However, that implies that we have a perfect fit of all model parameters.
The reality is that we have extremely good arbitrage-free pricing of fixed income instruments. We can model most of the potential distortions as well. Even so, we cannot reliably predict the future based on a current day's pricing. The situation for DSGE models is much worse: we know that there are very significant departures between the model and reality. This means that if we want to truly understand the time series properties of these models, we need to recalibrate them every model period, and study how the model predictions evolve. This is a much more awkward task than looking at the properties of a forward solution.

There is far too much mysticism about DSGE models. This mysticism distracts us from the main issues with these models. The first is that their computational complexity is addressing a use case that is not applicable in the real world: arbitrage-free pricing of physical goods and labour. The second is that even if we do not worry about plausibility, we still need to worry about the wedge between forward time and calendar time.
(c) Brian Romanchuk 2020
Posted by Brian Romanchuk at 2:07 PM