I have been seeing quite a few comments to the effect that central banks are propping up government bond markets now, and what happens if that stops? This is akin to saying the Bears 46 defence was not that good if they did not have all those players who were tackling their unlucky opponents. That is, that is how the system works, and it is a basic misunderstanding to expect things to be different.
I will mainly concentrate on Canada, where Quantitative Easing (QE) is a novelty.  There have been some parallel discussions in the United States, where I will make a few comments (where I do not have strong convictions, so they will be short).
The easiest way to understand government finance in Canada is to buy my book, which coincidentally has the title Understanding Government Finance (link). In it, I do MMT-style operations analysis on a simplified version of the pre-2020 Canadian system (in Chapter 3). The operations look very different than the pre-2008 U.S. system based on required reserves, which is the basis of most textbook descriptions. 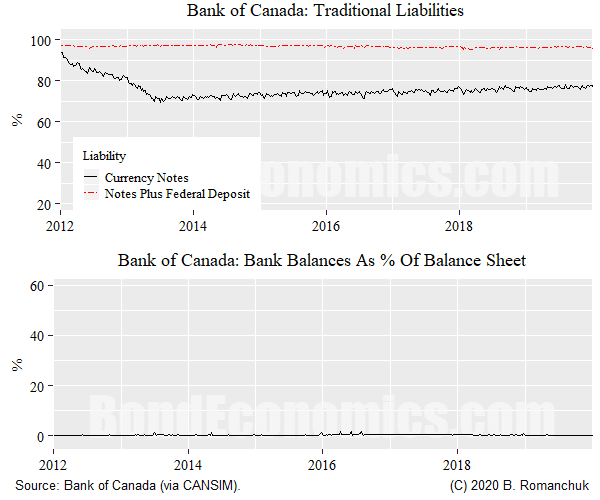 The above figure shows the balance sheet structure of the Bank of Canada (BoC) during normal conditions. (Time scale is 2012-2019 to avoid the deviations caused by crises.) The top panel shows that the liabilities of the BoC are mainly two items: bank notes in circulation (dollar bills, coins), and a deposit by the Federal Government (the Receiver General account). All payments to and from the Federal Government end up at this account; the Federal Government does not bank at private banks (at least with respect to Canadian dollars).
The bottom panel is what makes the Canadian system normally different than the U.S.: it shows the deposits at the BoC by the members of Payments Canada (the wholesale payments system), which are private banks. These correspond to "reserves" in American parlance, but is a misnomer since reserve requirement have not existed in Canada since the 1990s. (The Fed finally dropped reserve requirements to 0%, so we might see convergence in terminology.) As the figure shows, banks have a target balance for their overnight balance at the BoC/payments system of $0, and this is for all intents and purposes achieved. (Note that the balances were non-zero during the Financial Crisis, and now as a result of QE).
Let's assume that the banks perfectly hit their $0 target every day (which is close to reality). What does that mean? It means that the BoC has to offset perfectly the net transactions in the Receiver General account.
So what? Look at what happens on a hypothetical day where the Federal Government issues a bond, and everything else nets to zero. The BoC has to inject exactly the same amount of money into the private banking system. Under normal circumstances, this is either:
In other words, 100% of the auction is "financed" by the BoC operations. All the auction does is increase the Receiver General account balance, the BoC balance sheet grows, and private sector balance sheets are rearranged (they end up with new bonds, and either have repo liabilities or sell bonds to allow this).
If 100% of GCAN auctions are normally "financed" by the BoC, it makes no sense to ask the BoC to step away from financing the Federal government.
Let us pretend some brain surgeon wants to "wean the Federal Government off this dependency." What would they do? They need to ramp up the Receiver General account size to give a larger buffer to eliminate the risks associated with rollover risk. All this does is bulk up the BoC's balance sheet: the Federal Government increases its gross issuance, but other bonds (or repos) just pile up on the asset side of the balance sheet. From the private sector's perspective, this is just generous corporate welfare to primary dealers (mainly banks): they buy some bonds at auction, then flip other ones right back to the BoC. The spread they earn on flipping increases, while the net debt outstanding has not changed.
Although this policy might be popular with banks, I think we need to be stern and wean them off welfare. There are plenty of grocery stores that need delivery people if they need the extra cash.
If we look at 2020, there are two factors that are amplifying the amount of purchases by the BoC.
However, not all operations are GCANs, the BoC has waded into provincial names as well. My guess is that this was probably needed to allow the issuance needed to survive the crisis, since funds may have hit risk limits (and might be wary of default risk in the middle of the panic). Canadian provinces are the front end of the Canadian welfare state, and so their finances are more pro-cyclical than U.S. states.

There was some excited chatter about remarks by the Fed's Randal Quarles. They suggested that the Treasury market had grown too big for private markets to support, and so the Fed would need to keep intervening.
I am unsure about the context of those remarks, and I believe that they are tied to some technical work that has not yet been fully unveiled. As such, I do not have much conviction about what he said.
However, my feeling is that people are not looking at this like the Fed does. The New Keynesian Federal Reserve is obsessed about monetary policy settings being transmitted without distortions (which is probably why they publish term structure models that ascribe all the volatility in market prices to moving term premia, and not rate expectations or inflation breakevens). There is an extreme distaste for Treasury market volatility.
Fixed income markets are dealer markets, and their capacity to warehouse risk is always finite. There is always the possibility that there could be short-term flows that overwhelm that capacity. However, the Treasury Market is a market, and there is a mechanism to deal with such imbalances: price changes. Just let prices crater enough, the markets will clear at some point. Meanwhile, such price volatility generates profit opportunities for competent dealers, and so they might increase trading capacity.
This is a dilemma created by ascribing to neoliberal mythology. They want to insist that Treasury market pricing is a free market, so that there is a cudgel to threaten fiscal policy with. But at the same time, they do not want their precious monetary policy interrupted by markets acting like markets. A basic rule of thumb is that if you ask for the impossible, do not expect to get it.
(c) Brian Romanchuk 2020
Posted by Brian Romanchuk at 10:17 AM