The Era Of Sluggish Recoveries

If we look at the post-1990 era in the developed world, we see a relatively similar pattern: long expansions with relatively low economic volatility, punctuated with short recessions. In fact, in the case of Australia, the expansion was only put to an end by the Pandemic of 2020. However, if we look past the low volatility, we also see that growth rates were relatively low, and employment conditions generally weak.

NOTE: This is an unedited excerpt from a chapter within an upcoming manuscript on MMT and the upcoming recovery. The chapter describes the post-1990 expansions, which were characterised by disappointing growth. This sluggishness is explained from the perspective of MMT. This section is an introduction, and is my way of showing how slow growth surprised the consensus - repeatedly.

The uniformity of experiences was greater in the “Anglo” countries; Japan and euro area countries had somewhat divergent conditions. Japan had an investment boom run out of stem in the mid-1990s, while the euro area countries had a “euro convergence boom” that was the side effect of lower interest rates in countries that previously had weak currencies. That said, conditions converged after the 2001 global technology recession.

This moderation of economic volatility was famously labelled “The Great Moderation” by Ben Bernanke in a speech in 2004. At that time, Bernanke was at the time a governor of the Federal Reserve, but before he became the Chair of the Federal Open Market Committee. The concept of The Great Moderation was mocked after The Financial Crisis, but I would argue that we can at least characterise this era as having a commonality of sluggish recoveries. 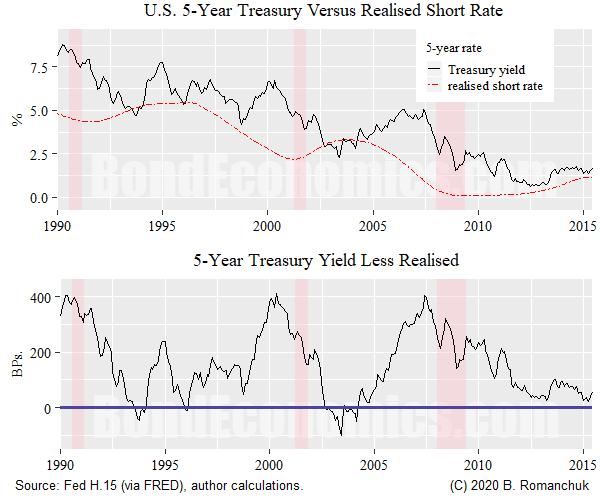 One of the interesting aspects of these sluggish recoveries were that they were not expected by the consensus. The conventional view ascribed great importance to central bank policy, and the low level of policy rates was expected to engineer a rapid recovery.

Giving an objective measure of the consensus view is somewhat awkward. I will focus on bond yields, as they are inherently forward-looking, and give a relatively clean time series history. The reason why bond yields are forward-looking as bond investors expect that a bond should provide at least as high a return as holding money-market instruments. The figure above illustrates the historical experience in the United States (the experience in other markets tended to be similar). I will discuss alternative measures of consensus views later. I am also putting aside the question of the term premium – I believe that the 5-year term premium should be small and stable. This is also returned to later.

The top panel shows the 5-year Treasury yield, which is compared to the average of the Fed Funds target rate over the subsequent five years (labelled “realised short rate”). Since the realised rate at a given date requires knowing the level of Fed Funds over the next five years, the time series ends in 2015, which is five years ahead of the chart creation. The bottom panel shows the spread between those rates, in basis points (1 basis point = 0.01%). What the figure shows is that the 5-year yield over the 1990-2015 period was consistently greater than the realised short rate. (For those who are not familiar with bond investing, the implication is that returns on holding bonds was greater than holding money market instruments, which implies that this period was a secular bull market.) There were only a few periods where the 5-year yield was below the average of the realised short rate.

We can focus on the periods that at the end of shaded recession bars. At those time points, we saw small rises in yields (bond bear markets), and an extremely large positive spread between the 5-year yield and the realised path of short rates over the next five years. The mechanism was straightforward: bond market participants believed that rate cuts were excessive, and that the economy would recovery quickly. When this did not happen, Treasury bond yields fell towards the policy rate set by the central bank. The only times that the 5-year Treasury yield fell below realised short-term rates was once the economy was mired in stagnation, and bond market participants got slightly too exuberant in extrapolating low policy rates.

I started working in finance in 1998, and for most of my career, I was a secular bond bull. I can attest to the reality that the government bond market was almost always hated by strategists, who warned that the U.S. economy would kick it into gear, and the Federal Reserve would be forced to hike interest rates to put raging inflation under control.

Admittedly, this perma-bearishness by strategists started to fade by 2012, once the magnitude of the collapse in activity created by the Financial Crisis of 2008 sunk in (and the economic drag created by the crisis in the euro periphery). It was only then that the consensus accepted that the U.S. economy could be stuck in a slow growth path, even with interest rates below the rate of inflation (“negative real rates”) and so-called “money-printing” by the Federal Reserve. One important thing to note is that MMT started to gain prominence at about that time, and part of the attractiveness of the theory was that this stagnation could be much more easily explained. (One could attempt to argue that MMT helped shift the debate, but my feeling is that this is perhaps too dramatic a statement.)


Why Bond Yields instead of Surveys?

One might question the use of bond yields as a measure of consensus – why not a survey of economists?

My initial concern is the difficulty of displaying the data in a useful format. It is easy to show a time history of GDP growth up to a certain date, and then forecasts of its path. Unfortunately, that just shows expectations at one point in time. What I want to highlight is the pervasive over-optimism that infected the forecasting community, and so we would need look at multiple forecasts, and the resulting graph is nearly impossible to interpret. By contrast, the bond yield/realised yield spread offers a summary of forecast errors as a single time series.

The next issue is a concern with the quality of consensus economist forecasts. Economists in the surveys play games, and herd together in a dysfunctional fashion. They face limited criticism if their forecast is incorrect, so long as it is amid the consensus. Conversely, bond investors have “skin in the game,” as their bonus (or even job) is at risk if they mis-price securities. As such, I am in the camp that puts more weight on market pricing than economist surveys.

The term premium is a subject that often comes up in the concept of discussing rate expectations. Technically, we should expect the 5-year yield to be higher than the realised average of short-term rates by the term premium (which varies over time). However, I do not find an estimate of a term premium of over 200 basis points to be plausible for a 5-year Treasury Note to be plausible, while that is the level of outperformance that we see at the end of recession periods. The reality is that market participants as well as the economist consensus expected rapid turnarounds that were not realised, and the raw outperformance of 5-year bonds gives us a good feel for the magnitude of the forecast miss.

It seems possible that this time will be different: there may be much greater skepticism about the speed of the recovery after the Pandemic of 2020. At the time of writing, very few market commentators are discussing the possibility of a rapid recovery. That said, the tendency of investment strategists and free market economists to over-sell the economic dynamism of the developed economies may once again take over.

The next sections [in the process of being written] will now turn to the economic characteristics of modern expansions.