My view is that changes in structure in the labour markets that started in the 1980s – but kicked into gear in the early 1990s – explain the structural breaks in the behaviour of the developed economies that took place in the early 1990s. The advantage of these changes has been the decline in inflation. Although neoclassical economists attribute this change to the switch to inflation targeting (as will be discussed in Section 2.5), I do not think we can assume away the changes to the labour markets. The disadvantage of these changes has been the persistent sluggishness in developed economies.

(Note: This is an unedited section of a manuscript that discusses MMT and the upcoming recovery. Although most people focus on fiscal policy stories when discussing MMT, labour market analysis offers a much greater contrast to neoclassical thinking. The section following this one delves into that aspect more deeply,)


This section is inspired by the book Full Employment Abandoned: Shifting Sands and Policy Failures, by Bill Mitchell and Joan Muysken. That text is an advanced academic text, and examines the history of employment policy from a MMT perspective. This section cannot hope to cover the historical analysis of labour markets in Parts I and II of that book. The third part of the book discusses topics that are more widely associated with MMT, and which I will cover elsewhere in this text. If a reader wants a formalised academic textbook that is an introduction to MMT, Full Employment Abandoned is one possibility.

From a long-term perspective, there are two structural changes to the labour market of interest. The first is the movement towards a full employment framework in the aftermath of World War II. (The war itself represented full employment, but one would assume that this was temporary.) Full Employment Abandoned points to the 1948 Universal Declaration of Human Rights, where Article 23 included the text “Everyone has the right to work, to free choice of employment, to just and favourable conditions of work, and to protection against unemployment.”

The next structural change effectively represents an effort to undo the previous changes. Mitchell and Muysken argue that the OECD Jobs Study: Facts, Analysis, Strategies of 1994 captured the new consensus perfectly (and provided the role model for reforms). They offer this quotation as a key summary of the thinking:


[I]t is an inability of OECD economies to adapt rapidly and innovatively to a world of rapid structural change that is the principal cause of high and persistent unemployment… Consequently, the main thrust of the study was directed towards identifying the institutions, rules and regulations, and practices which have weakened the capacity of OECD countries to adapt and innovate, and to search for appropriate policy responses…

To many readers steeped in the current labour policy consensus, the statements by the OECD might seem unremarkable. However, they bury key differences from the earlier framework (which MMT wants to revert to). The core difference is that they view persistent unemployment as being a matching problem (i.e., match the worker and the employer), and not the result of inadequate demand. This difference in the diagnosis implies a different remedy: remove frictions that slow down matching. As was typical for the neoliberal era, regulations were viewed as a source of the problem. Meanwhile, one hidden implication is that unemployment is largely the fault of workers – they are not adaptable (e.g., skilled) enough (although the bureaucrats behind the document would not use such crass language).


Changing Behaviour of the Labour Market

The text Full Employment Abandoned is focused on the changes in the labour market, and therefore has the space to cover the qualitative changes to the labour market. In this context, Section 5.2 – “The Full Employability Framework” – discusses the changes to labour market programmes that corresponded to the OECD Jobs Study world view. The authors state “The full employability framework allegedly prepares the unemployed worker for paid employment as opposed to providing the policy environment that ensures there are enough jobs.” Market-based outcomes are the key to the full employability framework. For example, regional unemployment is to be dealt with via migratory responses by workers (the “get on your bike” philosophy associated with British Conservative politician Norman Tebbit). As Mitchell and Muysken note, relying on migration benefits growing regions, and does little for the development of regions with weak economies. 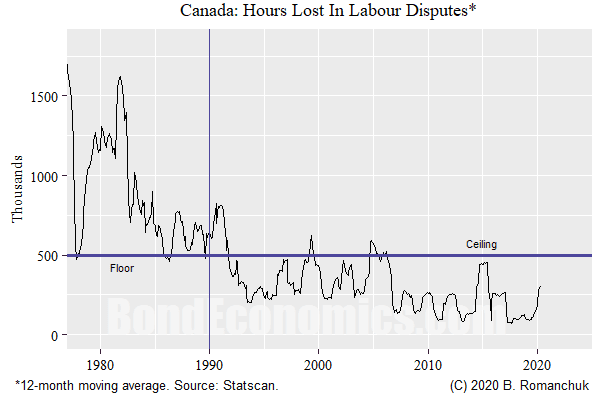 The first example of a quantitative metric is the number of strikes. The figure above shows the hours lost in labour disputes in Canada in a month, smoothed by taking the average over 12 months. Note that I have made no attempt to adjust for the size of the labour force – that grew over the period. We can see the high levels of strikes at the tail end of the 1970s and early 1980s, which were memorable. (One of the annual rituals was trying to mail Christmas cards before a potential postal carrier strike.) I added two somewhat arbitrary lines to illustrate the change in trends. Before 1990, the (smoothed) strike series rarely dipped below 500,000 hours per month. Once we are past the early 1990s, the 500,000-hour line was the effective peak of the smoothed series. (I put the vertical line at 1990 for ease of comparison across figures.) As the chart text observes, the floor for strike activity levels before 1990 became the ceiling thereafter. 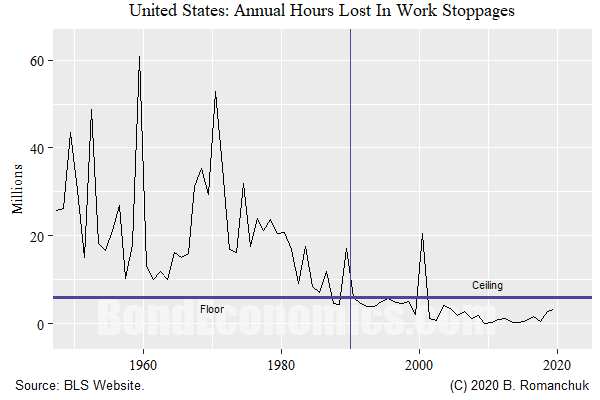 The drop in strike activity was not confined to Canada. As the figure above demonstrates, work stoppages remained relatively low after 1990 (with a single spike in the year 2000). The American data has a longer run of history than the Canadian data, and we can see that rise in strike activity in the late 1960s and 1970s – the era of high inflation.

A closely related trend is the decline in unionisation. Before the 1990s, industries were dominated by large firms with large, unionised work forces. However, starting in the 1980s, firms started shrinking their workforces, outsourcing functions to specialised firms. That outsourcing increasingly moved to countries with lower wages in response to free trade agreements. Currently, the largest unions tend to be associated with government employment, while many large employers (e.g., retailers, fast food) have managed to avoid have their workforces unionised. 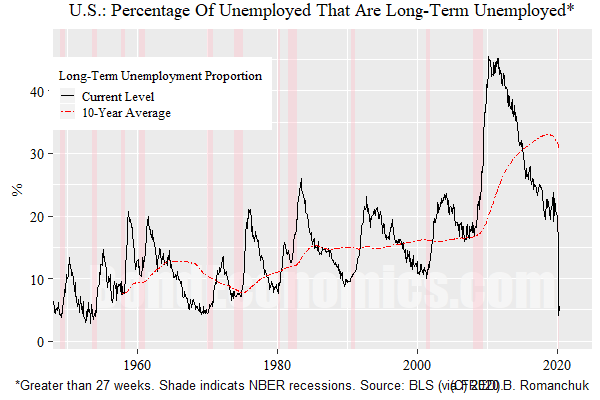 The nature of unemployment has also changed over time, which can be readily seen in the data. The chart above shows the how unemployment has become more persistent in the United States. It shows the percentage of the unemployed population that has been unemployed for more than 27 weeks. We see that this percentage rises as the economy comes out of recession, and the most sought-after employees find jobs in the immediate bounce in hiring. The percentage then grinds lower during the expansion, as either long-term unemployed either find a job due to improving conditions, or they drop out of the labour force.

If we look at the 10-year average of the series (which smooths out the effect of recessions), we see an upward slope starting in the 1970s, but without a noticeable deterioration starting in 1990. That said, the measure rose rapidly after the Financial Crisis, and only ground down to 20% during the expansion – which was the peak level in earlier eras.

(The rapidity of the collapse of employment in 2020 meant that most unemployed workers were newly unemployed, and so this ratio returned to levels last seen in the 1970s. My assumption is that this ratio will head higher in response to the initial return to work in the United States.)

Pavlina R. Tcherneva highlighted this ratio in “Reorienting Fiscal Policy: A Critical Assessment of Fiscal Fine-Tuning,” which was published in 2013. It offers another analysis of the changing nature of fiscal and job creation policies from a MMT perspective. 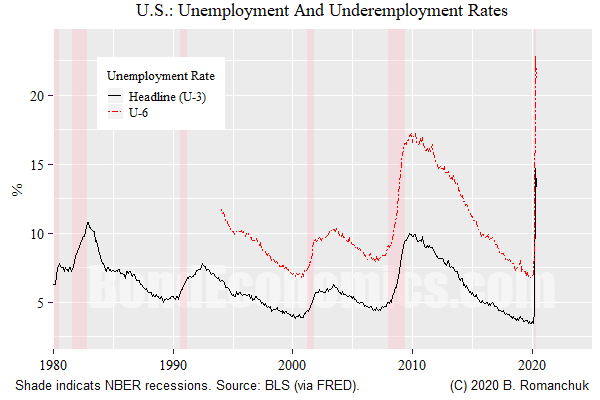 One final concern with labour market structure is persistent under-employment. These are workers that are considered employed (and are therefore not part of the headline unemployment rate), but they are not working as many hours as they would wish (e.g., working part time, but wish to have full time employment). In the United States, there are a number of unemployment definitions, with U-3 being the headline rate (the number that is quoted in headlines), and U-6 being a wide measure of under-employment. These are shown in the figure above. Unfortunately, the U-6 under-employment measure only starts in the mid-1990s, and so we cannot infer anything about structural changes.

The rise of the so-called “gig economy” has taken the concept of “adaptability” to the limit. Workers are re-branded “contractors,” and would be considered employed (self-employed), even if they work very few hours. Admittedly, there are many cases where people will want to be self-employed on a part-time basis – I am in that category – we cannot confuse people in that category with workers with full-time contracts and income stability.

The reduction in the bargaining power of workers had the effect of lowering inflation rates, consistent with post-Keynesian economic theory. Also, post-Keynesian theory suggests that there would be a reduction in aggregate demand, lowering growth rates. This is consistent with the observed slowness of recovery. Note that this is different than standard neoclassical models that suggest that growth rates ought to bounce around some equilibrium level, and that by reducing frictions in the labour market, growth should have been faster.

Another line of argument is that slow wage growth has been associated with greater inequality, and more unequal societies grow more slowly. The mechanism appears straightforward: the ultra-rich spend less of their income, and so hoarding of income increases. The lower propensity to consume lowers aggregate demand. Although this line of argument appears plausible, I am not highlighting it here, as it is politically contentious, and would be a major area of dispute that would be a distraction from my main arguments.