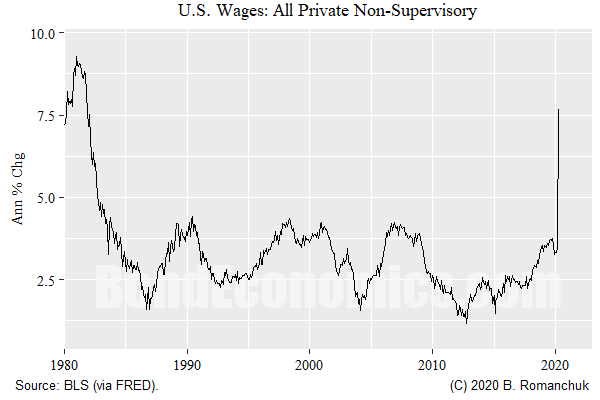 U.S. labour marker data for April was released, and it was ugly, which should be a surprise to nobody. If we step back from considering the human costs of this downturn, the chart above demonstrates that a lot of data has lost information value courtesy of the nature of the pandemic. As shown, measured hourly wages for non-supervisory employees has risen by the most since the early 1980s. Since people like myself often used this time series as a measure of inflationary pressures, this would be concerning. The reality is that this rise is just an artefact of the reality that low-wage jobs have borne the brunt of layoffs or furloughs.

Inflation should not be the primary concern of policymakers right now, but it cannot be completely ignored. The limitation on fiscal policy is inflation, and having a total collapse in purchasing power of the domestic currency would not be helpful. My feeling is that if economic institutions can be adapted to deal with the new reality, we neither need have excessive household stress nor inflation (as discussed below).

It seems quite likely that it will take a few months for data to settle into a new steady state. There should be a return to work as stay-at-home orders are lifted, and the sectors that see a burst in demand hire. However, the second-order effects will also result in job losses, and relaxation of health codes will not stop those losses.

My wild guess is that if second order effects could be short-circuited, economies could adapt to a "physically distanced new normal" with an unemployment rate that is comparable to that seen in the aftermath of the Financial Crisis. Not exactly great, but within modern precedents. Dealing with the costs of such an unemployment rate will not pose measurable inflation risks, as was the case in the previous cycle. (Policymakers chose to embrace sociopathic austerity policies, and economies were mired in below-target inflation amidst widespread underemployment.)

However, the United States is not shaping up to be doing a good job of avoiding those second order effects. We would need to look at economies like New Zealand, Iceland, Taiwan, Singapore, and Hong Kong (and probably Japan) to see how developed economies can adapt to this new environment. (China also appears to have adapted, but its economy operates quite differently than the developed economies even under normal conditions.)