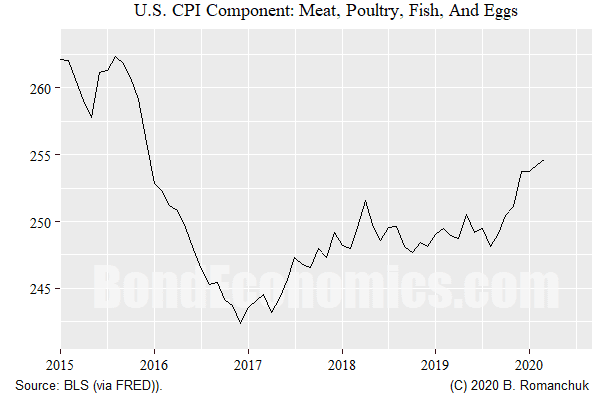 Since I am supposed to focusing on formatting my book*, I am not able to spend too much time following the news flow. Right now, one of the more interesting economic stories is the situation of meat production in North America. This is one of the most visible cases of potential supply side bottlenecks due to the pandemic. Is this purely a problem with an industry that has not taken worker safety seriously, or will it be repeated elsewhere as other industries attempt to ramp up production?

This week has seen a certain amount of central bank activity. Central bank watching is a popular sport among finance journalists, but it seems to me that the implications are limited. Central banks are not going to let the wholesale financial markets implode, and will use whatever trick in the book they have access to in order to achieve this end. Whether saving the wholesale markets can save small businesses, or doomed industries like airlines, is another question.

As has been pointed out repeatedly, not all economic activity has ceased completely. Food and essentials are still being produced, utilities are running, as well as shipping. Even take-away restaurants are operating. (For my personal situation, almost all the retailers I normally shop at are available via delivery services, or via store visits under safety protocols.)

At the same time, community transmission of the virus has largely stopped in the countries that are locked down. (Deaths are rising in Canada largely due to the rapid spread through old age homes, which were not protected properly.) So it appears that some activity is consistent with a slow decline in infections. The question is what can be done safely?

One of the hot spots has been large meat packing plants in Canada and the United States. The question is whether this is specific to North American industrial agriculture practices. (I have not seen similar levels of complaints in other countries, where animal slaughter is less concentrated, but that is obviously not a researched claim.)

One possible explanation is that large North American meat processing plants are ignoring safety protocols. These plants have never been noted for their concern for worker safety. (See this article by Yves Smith.) Alternatively, this is just the result of meat packing plants being one of the few large industrial concerns operating right now, so that is where the cases are. With reopenings starting across North America, this will need to be watched closely.

The somewhat optimistic take is that most manufacturing in developed countries is capital intensive, not labour intensive, so it will be possible to resume production at a lower throughput rate in a safe manner. Given the fall in demand, losing peak capacity in most industries will not matter that much. In that case, we mainly face a situation of declining demand, and supply is not impaired to the same extent (other than for industries that are shuttered completely -- and thus have no prices associated with them).

However, people still need to eat, so the demand for meat is steadier. As seen in the chart at the top of the article, increases in meat prices have not filtered through to the U.S. CPI data in March.

It seems quite likely that meat prices will rise over the coming months. However, this is probably not enough to move the aggregate CPI index (as I discussed in an earlier article). Consumers will necessarily be forced to adapt their diets to be less meat-oriented. Given the excessive amounts of proteins consumed by North Americans, as well as the buffer created by food waste, this is not necessarily that catastrophic. However, it seems safe to forecast that hard money proponents will wail continuously about meat prices, and how that the CPI is fraudulent.

The consensus appears to be that inflation is not a concern, and I see no reason to disagree with that assessment. The key seems to be to see whether any other industries suffer similar problems, and it will take time for them to appear.

Finally, the meat industry appears to provide a very good test for the theories floating around that either COVID 19 is not particularly dangerous, and/or whether herd immunity is possible. By all accounts, the large meat packing plants were infection hot spots, and if any group was going to achieve herd immunity, those workers would be at the front of the line. If they still face difficulties, the authorities will have to re-consider any strategy that involves just attempting to cope with the virus. In which case, objectives need to be raised, as discussed at https://www.endcoronavirus.org/

* Nearing the end of getting the text formatted for EPUB, at which point it will be available for sale at the remaining e-book sales sites. The paperback edition requires the creation of an index, as well as an examination of the physical proof. (A previous book had its file mangled during an internal processing step at the printer, and the electronic proof did not match the physical output.) Since I cannot guarantee that will not happen again, I need to wait to see the printed proof, since I do not want to sell defective paperbacks to new readers.