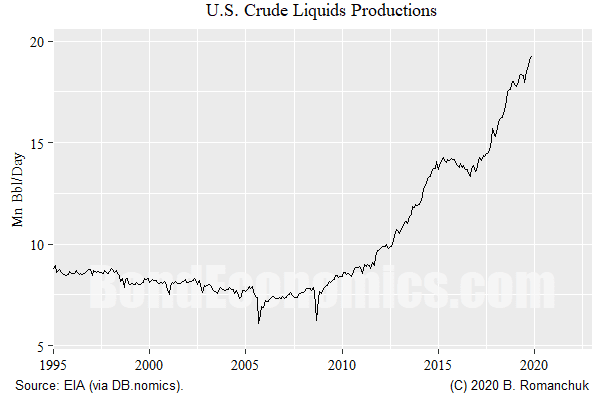 My base case view matches what is priced into the markets: the crude oil market is glutted and demand is falling off a cliff. Storage constraints are in sight, and I am not seeing an immediate catalyst for a demand rebound. The nearly inevitable outcome is that drilling drops dead, and capacity is shuttered. At some point, one will be able to take the chart of U.S. crude liquid products (conventional oil plus the products of fracking), stick a red line through the maximum value, and all other values on the chart will below that maximum. In common parlance, this behaviour is known as a "peak." As a long-suffering card-carrying Peak Oil believer, I will be flooding the internet with "I told ya so!" missives.

I accept that one can generate some scenarios where a peak does not occur near this point. Meanwhile, I am not saying that this will be a maximum for all time; this is a "local maximum." However, I am not incredibly optimistic that the U.S. will be able to take another run at the 20 million barrels per day level any time soon.


But, But, What About Price?

Peak Oil got a bad name on the internet as a bunch of people with training in the physical sciences or even things like computer science jumped on the bandwagon. Very simply, modern universities have convinced undergraduates (and even graduate students) that one can fit a line through a time series generated by a complex system. and call that the "scientific method." Needless to say, a lot of really bad predictions blew up.

The original peak oil analysis looked at a particular oil field, and yes, an individual oil field's production conforms to something like a bell curve as a result of the geological processes. However, oil production in a country (or globally) does not have to conform to that curve (although people were able to do such fits over short periods) -- production also depends on drilling activity. The U.S. blew past its previous peak in liquid production by going nuts with fracking.

Even a slight glance at historical databases would tell you that production gets throttled back in a recession. Meanwhile, oil prices crater during recessions. So yes, peak production should be expected to coincide with low prices.


The Rough Climb Back

Unless demand comes back quickly, it will be difficult for U.S. production to come back to its peak. One of the big differences between fracked oil fields and conventional oil fields is that fracked wells have a very rapid rise and depletion curve. You can ramp up production quickly -- but it goes away just as fast.

To get back to the current peak, the U.S. fracking industry needs to make up the loss of shuttered production, the depletion curves of existing fracked wells, and the ongoing slow decline of conventional oil production.

This is only going to be possible if investors are willing to finance ramped up fracking activity. Their happiness to do so will be heavily dependent upon the recovery rate on the industry's existing debts. I will leave the assessment of this to the reader.

Absent some structural changes to the industry (e.g., protectionism), unconventional oil will only be safe from these periodic squeezes is when conventional production has declined to the point where it cannot meet all demand. That is when consumers will face structurally higher crude prices. Until that time, it is going to be a roller coaster ride.

Email ThisBlogThis!Share to TwitterShare to FacebookShare to Pinterest
Labels: Peak Everything