Inflation Is NOT The Most Significant Factor Determining Bond Prices

One of the pieces of pseudo-science that floats around in popular discussion of bonds is the belief that bond investors are deadly afraid of inflation. In particular, bonds "lose money" every time the Consumer Price Index rises -- which is most months, in most developed countries. As far as I can tell, this is the legacy of some Economics 101 textbook story that has been passed on from "expert" to "expert" over the decades.

The correct answer is that nominal yields largely reflect the expected path of the short-term nominal policy rate, and is thus a reflection of the central bank's "reaction function." (At this point, some people will jump in and start going on about the term premium. However, unless we using an obviously dysfunctional term premium model, the term premium is only a small deviation from the fair value determined by rate expectations.)

The genesis of this article is a question that showed up on the Economics Stack Exchange. The person who posed the question quoted from a primer that came from a less authoritative website. The underlying premise behind the question is that real yields are constant.

Since the arguments I am discussing were pretty shaky, it is difficult to trace where they came from. However, my guess is that the logic worked as follows.

This logic was hard to refute when the only data available was nominal yields. However, the advent of inflation-linked bond markets means that we can dig further.

The story that inflation causes bonds -- and only bonds -- to "lose money" is frankly bizarre.

Imagine that you hold an equity mutual fund, a bond mutual fund, and a money market fund. Each fund has a certain Net Asset Value (NAV). The government suddenly raises the sales tax and boom! -- the price level rises. According to the usual story, you were hit by "losses" on your bond and money market funds, while the equity fund did not lose money. Really?

If we think about this for more than five seconds, we need to look at what happened to the NAV of the funds. Guess what? Since the early 1980s, the United States and other developed markets were in a secular bond bull market. Meanwhile, there was a positive inflation rate most of the time. Bond funds were rising in value, both in nominal and real terms.

You need to look at actual returns data, and funnily enough, the story is that practically anything can happen, particularly over short holding periods.

The first modern inflation-linked bond market was developed in the United Kingdom. At the time, the U.K. had quite poor inflation performance, and in fact, the markets did feature stable real yields and oscillating inflation expectations. 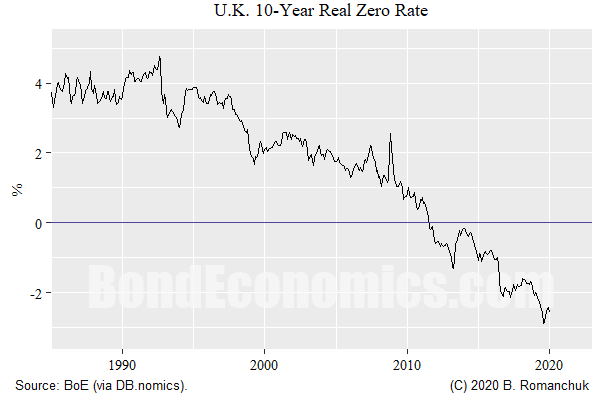 The chart above shows the 10-year (zero) real rate from the Bank of England historical yield curve data set. We see that the real yield was in fact stable near 4% in the 1985-1995 period.

However, inflation finally got under control, and the volatility moved to the real yield. The collapse in nominal yields coupled with steady inflation meant that real yields went quite negative. If we look at other developed markets like Canada and the United States, we see an initial period of mis-pricing then the inflation breakeven stabilising around the 2% level. This meant that the big swings in nominal yields resulted in real yield volatility.

In other words, inflation was no longer a source of returns volatility. This is what we would expect to happen if policy results in inflation sticking near target. (Whether the policies that drove this outcome is monetary policy versus other policies is a point of debate between the mainstream and MMTers.)

(Nick Rowe periodically discusses this, and attributes this to Milton Friedman's "thermostat analogy." The idea behind the analogy is that if a home heating system is functioning properly, there will be no correlation between furnace energy consumption and interior temperature -- since the interior temperature is roughly constant. However, this does not imply that the furnace has no effect interior temperatures. Given my control systems background, this point seemed so obvious that I never saw a need to dig into which economists said what about it.)

The following factors determine nominal bonds yields. (Note: this list is comprehensive, but I wrote it quickly, and may have missed something.)

In summary, there are lot of things that can affect bond prices in the real world. To what extent inflation shows up, it is how central banks react to it.

I tweeted earlier about this, and the topic of really high inflation "breaking" my arguments was raised. I do not see that as a serious dissent from my view -- the inflation surprise would likely cause a reaction by conventional central bankers. However, based on my experience, almost every time an economist interjects "inflation!" into a discussion of bond yields, they are about to be totally wrong on the duration call.

* Even if you are concerned about the real value of your portfolio, that does not mean that you are worried about the real yield of bonds. For example, imagine that inflation is 2%, and the bond yield is 1%. Although that is allegedly bad, apply enough leverage to that sucker, and you get a 20% nominal return (if you are lucky...). To be clear, I am not recommending that investors run out to leverage bond portfolios, but want to make it clear that pricing is driven by relative value traders that apply leverage to their positions. As such, they are just interested in positive nominal returns, which are then dialed up.