The concept of the fiscal multiplier can be viewed as simple, but there are many potential complexities to analysis. In this text, I keep the discussion simple (with a nod towards the complexities). There are multiple potential definitions of the fiscal multiplier, but I will use a straightforward one: it is the coefficient relating the expected change of nominal GDP based on an assumed change in a fiscal variable. For example, if a policy change scenario is expected to raise the fiscal deficit by $100 million (relative to baseline), and the modelled change to nominal GDP is $150 million higher than the baseline, we could say that the multiplier is 1.5 from the deficit to GDP.

The definition deliberately uses the vague term “fiscal variable” for reasons to be discussed later.

Note: this is an unedited draft of a section from my upcoming book on recessions. It refers to section numbers in the manuscript, which I am leaving in place. It skips over most of the usual subjects of debate (and research) around fiscal multipliers, rather it looks at the big picture. For a variety of reasons, the big debate about the fiscal multiplier is the size of the multiplier. The complexities of the topic are discussed in this text, and essentially explain why I am not too concerned with much of the debate around the size of the fiscal multiplier.

As an example of such a scenario, I will take the simplest possible “Keynesian” model: model SIM from Chapter 3 of the textbook Monetary Economics by Wynne Godley and Marc Lavoie.[i]  I discussed the workings of this model in detail my book An Introduction to SFC Models Using Python. The advantage of using this model is that it is easily understood even if one is averse to mathematics. Although it has obvious shortcomings, they are easy to see and explain what they are. More advanced models have corresponding greater opacity. 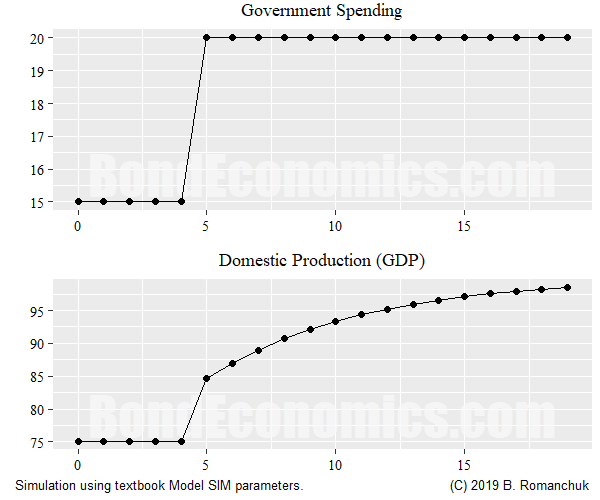 The figure above shows the results of a hypothetical fiscal expansion. The economy is in a no-growth steady state up until time point 5, when the jump in government spending occurs. Government consumption rises from 15 to 20, while GDP rises from 75 and is tending to 100. The construction of model SIM is such that the steady state GDP is a multiple of government spending – with the textbook’s parameter values, the multiplier is 5.

We can also see that model GDP does not immediately jump to the final steady state, and so we immediately see a problem with discussing “the” multiplier: the effect of the change in spending properly has an effect that varies over time. We need to distinguish long-term effects from short-term effects, and this affects empirical estimates of multipliers.


What Fiscal Variable is Changing?

We can view most governmental programme spending as being a dollar amount under the control of the government – e.g., the salary expenses for permanently employed bureaucrats at a government agency, or defense department acquisitions. However, the other modes of fiscal policy are not properly described in dollar amounts (although that is exactly what conventional analysis does).

The conventional way to budgetary analysis is to look at projected budgets, and work with the projected dollar amounts. One can then use a straight multiplicative multiplier to see the projected effect on growth. However, we see that this is misleading except in the case of straight changes to non-welfare state expenditures.

The other set of complexities with respect to multiplier is that not all taxes and expenditures have the same effect on the economy. We can see the following effects in simple macroeconomic models that are adapted to allow for these dynamics.


We would need a detailed macroeconomic model to capture low-level dynamics to properly model the effects of changing fiscal policy in the real world. Since such models are not particularly successful, we are stuck with approximations. This creates a great deal of fuzziness around “multiplier” estimation in practice.

My argument is that any relatively simple macro model that disaggregates the private sector will result in different fiscal policy changes having different sensitivities with respect to their effect on growth. It is only possible to generate a single multiplier in a model where we avoid any attempt at disaggregation (such as simple post-Keynesian SFC models, or neoclassical unitary representative household models without business sectors). Therefore, one should expect empirical multiplier estimation to be an extremely difficult task. As a result, I do not see much value pursuing the literature on multipliers within this text, since that will just tell us what we already can guess from first principles.

Nonetheless, the basic multiplier story remains pertinent for the discussion of recessions. Sufficiently tight fiscal policy will always be enough to generate a recession, and one might hope that a well-timed fiscal boost could prevent recessions (as will be returned to Section 3.5).