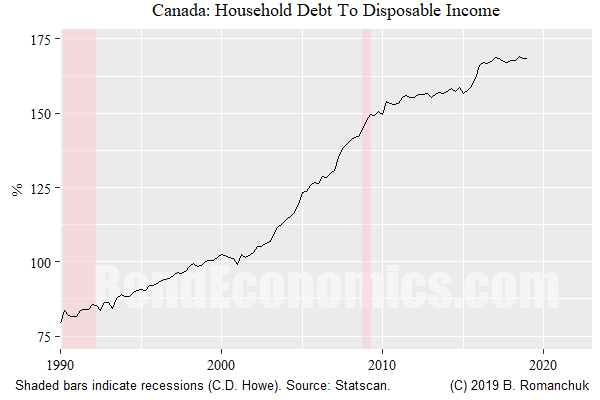 I have not been commenting on Canadian data recently, but I just wanted to update the above chart of the debt-to-disposable income ratio. (It caught my eye as I was inserting the chart into my manuscript.) It was very easy to declare the rise in the debt-to-income ratio "unsustainable," yet it has been sustained for a long time.

I have been bearish on Canadian housing for longer than I have been a homeowner (the classic case of a fully-invested bear). As a result, I am not the most reliable commentator on this topic. However, I would note that my argument has long been that the housing situation will cause severe problems in the next recession, the issue was forecasting the recession. 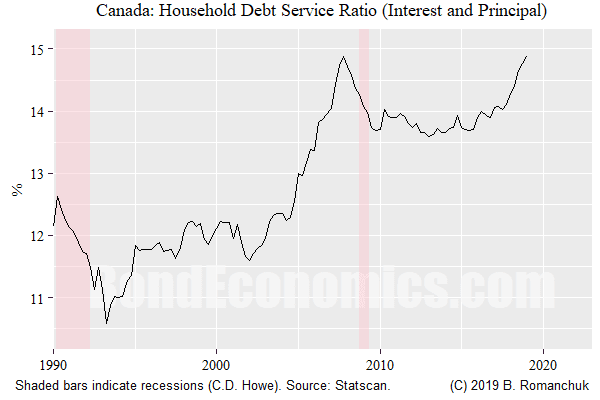 The first chart is perhaps deliberately sensationalist, what matters is the debt service burden. Mortgage payments are a blend of principal and interest, and so lower interest rates means that households can hold higher mortgage balances even with unchanged payments. The above chart shows the rise in the total debt service burden. There is an increase, particularly since the 1990s, but the magnitudes are much smaller than might be suggested by the rise in the debt-to-income ratio.

It must be understood that this is not particularly newsworthy to anyone following the Canadian situation; however, most of my readers are outside of Canada and may not follow the data flow. Instead, I am raising this as an example of how we need to be careful about "debt determinism": that rising debt levels are a sign of impending crisis. Rather, changes to debt levels reflect current financing decisions that reflect current income and confidence trends.

From a bond market perspective, it creates a very frustrating environment for Canadian bond bears. The rise in debt service implied by higher nominal rates would probably be enough to trigger a crisis in vulnerable households -- dampening demand, which is the presumable reason for rate hikes by the Bank of Canada. It would be dangerous to argue that rates will be locked at low levels forever, but it does make the logic for high rate scenarios more awkward.