Is The Treasury Market Wrong Because Of Hedgers? 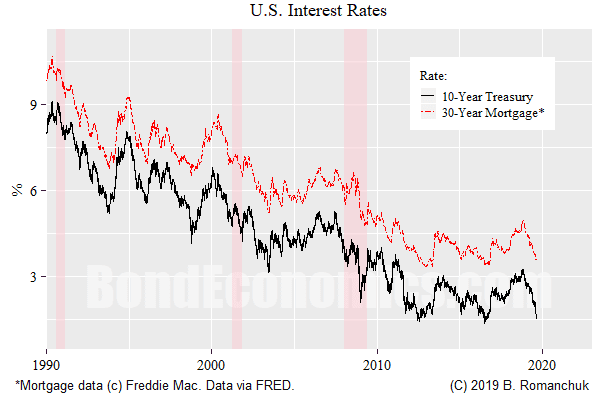 Since I do not give unsolicited investment advice to random strangers over the internet, I cannot give an answer to those questions. However, I can safely discuss the background behind these arguments, which have some merit (but are perhaps dangerous).

The figure at the top of this article shows the 10-year Treasury yield and the Freddie Mac 30-year conventional yield (which I just showed a few weeks earlier, but I cut down the time scale). If you look at the black line showing Treasury yields, you will see that when they hit a local bottom, they tend to violently reverse. I.e., the yield chart is "V-shaped," which means that the price peaks and then falls relatively rapidly.

This sort of peaking behaviour is relatively common in financial markets, but I would suggest that this tendency is magnified in the U.S. Treasury market. (Someone with a good quality database could run statistical tests on that assertion; it did seem to hold for the U.S. market versus other developed government bond markets.)

I suspect that this is a factor in the current yield drop. However, I need to add an immediate disclaimer: we do not know where the reversal will happen. For example, knowing that the 10-year yield will rapidly rise 50 basis points in the future does not help directional strategies if you do not know how far the yield will fall before that reversal. (Volatility trades could benefit.) As a result, the existence of hedging "distortions" is not enough to make money trading the direction of rates.

The unusual structure of the U.S. mortgage market explains why the U.S. dollar market features these characteristic moves. Conventional mortgages fixed interest rate mortgages in the United States that are financed by the housing agencies offer homeowners the option to repay early. This means that if mortgage rates fall sufficiently, a homeowner can get a new mortgage that pays off the old mortgage, and either keep the same payment and get cash back, or lower the mortgage payment.

In a country like Canada, homeowners do not have the right to prepay the entire mortgage, and so this is not a factor in Canadian fixed income.

Although the ability to prepay mortgages is great for homeowners, it comes at the cost of the owners of the mortgages. There are two main classes of mortgage owners:

Since nobody likes seeing entities financing fixed coupon assets with floating rate debt, levered financial institutions typically issue fixed rate debt to finance those assets. This means that all the major holders that matter hold mortgages against some form of liability: debt issues, actuarial liabilities, or a bond benchmark that typically has a large component of non-callable bonds.

Since the mortgages will be prepaid at par -- no matter how low interest rates fall -- their maximum price is capped. However, the fixed rate liabilities keep increasing in value as interest rates fall. This means that they need to somehow increase duration to get their assets back into line with liabilities. There are a wide variety of means of buying duration, but duration itself is fungible, and so all the duration sources move together. In plain English, this means that they are forced to buy Treasury bonds to make up for lack of price appreciation in mortgages. This pushes down yields, creating a positive feedback loop of hedgers driving down yields, which increases hedging demand.

This means that yields fall until they stop falling, at which point the feedback loop turns in the other direction.

I keep running into arguments that "rate expectations is wrong," but in my view, the logic is flimsy. Rate expectations theory accepts the two following points.
In this case, institutional investors are well aware that duration hedging creates a runaway freight train. Nobody will want to jump in front of that train and sell duration until valuation is extremely out of line (i.e., bond yields are stupidly low versus investor forecasts).

As such, the V-shaped dip in yields is just an overshoot away from fair value. However, these overshoots are quite short-lived, and so it is unclear how meaningful they are.


Explaining Away the Bond Rally?

This discussion raises another interesting issue: the tendency to explain away the bond rally as a purely technical issue.

From both a theoretical and practical standpoint, a great deal of attention is showered on priced market expectations. The argument is that market pricing ought to be a powerful leading indicator.

However, just using market expectations poses a problem for market commentators/forecasters: if we accept them always, everything is always priced-in properly. This makes it impossible to make useful forecasts. As such, forecasters need to disagree with market pricing in order to generate profitable trades and/or attention. The question is whether forecasters as a group go too far in that direction: tending to explain away market moves if they do not fit their priors.

Since I am not positioning myself as a forecaster, I am pretty much forced to take market pricing at face value. This means I will not generate a reputation as a guru any time soon. However, it is an attitude than can be useful in fixed income. The trick is to look at relative value trades, not directional trades. One may hope to identify particular segments of various curves that are mispriced, typically the result of funding flow pressures. Furthermore, one can construct trades with options (conditional curve trades) that pay off on various scenarios, without having much in the way of directional risk. As such, I would argue that fixed income analysts need to hold in check the tendency to want to disagree with market pricing too often.