This is just a short post-script to some points in the James Meadway article I discussed yesterday. What is to be done about financial sectors that are out-of-control, and endangering economic stability?


But these two easings of restraints are joined by a third decisive feature of the global economy. Adam Tooze’s exceptional history of the last decade, Crashed, describes the situation when, in the depths of the financial crisis, British banks faced huge demand for dollars — the result of their massive dollar liabilities — that not only could they not meet, the Bank of England itself could not meet. Instead, ‘swap lines’ were opened from the Federal Reserve in the US to supply dollars at rock-bottom (but still notably profitable) rates to financial systems in countries like the UK that were suddenly grossly overstretched. [...]
Reducing that dependency should be a key aim of any future left-wing government. To the extent that banks are better capitalised and somewhat more regulated it is reduced, but remains a problem for as long as the UK is running a major deficit on its current account. [...]
To end austerity permanently, we have to transform how our financial system works, reducing its exposure to the risk of a major collapse. And to transform finance, we need a slow, methodical process akin to defusing a bomb — not a further explosion. It will mean ‘structural reforms’ to our economy — building new institutions to deliver investment, like the regional development banks; changing the ownership and control of productive assets, for example through the Inclusive Ownership Funds — issues on which MMT advocates are usually silent. 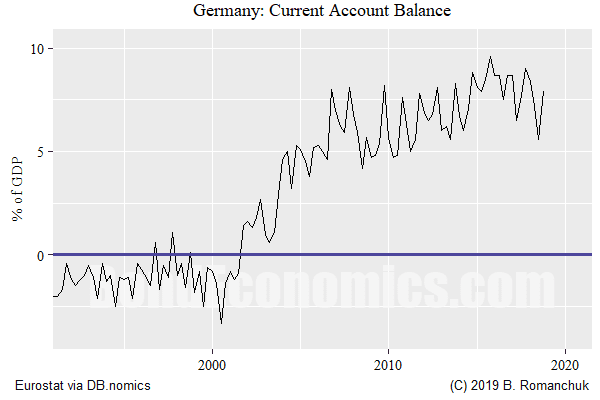 Germany provides a vivid counter-example to the Post-Keynesian mantra that countries need to run current account surpluses to avoid financial crises: any sufficiently-badly managed financial system can have a financial crisis, regardless of the fiscal and external position.

Yes, the need for massive bank bailouts impinges on national sovereignty. This is why MMTers argue that you need to regulate the financial system properly in the first place -- and not mope about the external position.

Although there is some MMT literature on novel forms of banking, my argument is that the financial system is already bloated beyond societal needs. Adding more capacity does not appear to make a lot of sense. You need to bring banking systems under proper regulatory control. To be fair, international regulators did wake up to this fact after 2008. However, the steps needed for any particular country would be complex and country-specific --not exactly the sort of material that ends up on internet primers aimed at a mass audience. So complaining that random MMT activists do not go on about such reform plans should not come as a surprise.

The MMT argument is simple: banks are public utilities, and should be regulated as such. As anyone who has read Minsky knows, that is a difficult, ongoing task - since financial systems continuously "innovate" to get around pesky regulations. Therefore, there are no "one size fits all" prescriptions for all countries.