Regional economic divergences add to the complexity of recession dating. The fact that economic conditions vary across the country also complicates the policy response to recessions. The emphasis on automatic fiscal stabilisers in Modern Monetary Theory reflects this reality.

(This article is an unedited excerpt from my manuscript on recessions.) 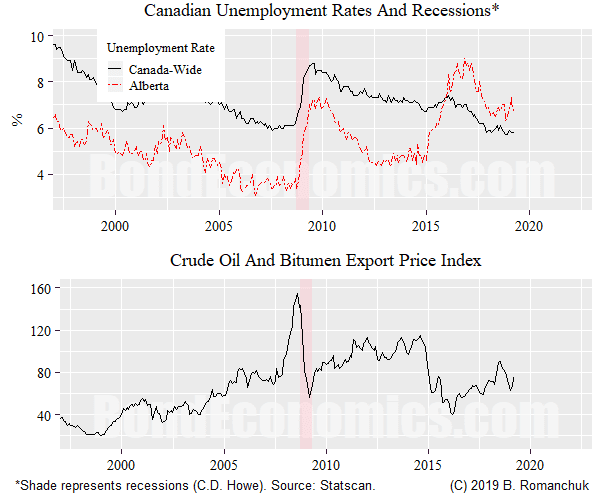 If for someone based in Alberta, the fact that the national economy avoided recession could be viewed as a piece of trivia. Business plans are still going to be disrupted by lost jobs among customers.

The existence of these divergences is one reason I am not particularly concerned about the details of recession-dating procedures. A national economy is the sum of regional economies. If national gross domestic product is on the verge of contraction, some regions are almost certainly undergoing economic contractions. (The only way that could be avoided is the low probability event that all regions have the exact same growth rate.) We need to ask why we are interested in determination of recession dates in the first place, as the side effects will likely be in evidence in some regions of the country.

If our concern is more financial crises, then these regional divergences are of less importance – putting aside the important exception of the euro zone. Generally, financial systems are largely national in scope, although the United States has a large regional banking system. Financial crises therefore tend to be national events, and there is a across-the-board tightening of credit conditions. (The Savings and Loan Crisis in the United States was somewhat regional in character.) The impact of the crisis dwarfs the discrepancies between the national regions.

(The euro area is more of a currency peg system than a true integrated economy. Financial systems are national, and financial crises can be contained within particular countries, as was the fate of the euro periphery after the Financial Crisis.)

From a policy standpoint, regional divergences call into question the emphasis on aggregate demand management. The economic mainstream is fascinated by aggregated models, particularly those based on the notion of optimising agents. Interest rate policy is the preferred mode to deal with economic fluctuations, and interest rates are common across an entire currency bloc. To the extent that fiscal policy is accepted as a policy tool, it is thought of in terms of its effect on aggregate demand.
This stance fails when faced by regional divergences. The worst-case scenario is having some regions of the country contracting as a result of industrial weakness, while other regions are in the throes of a housing bubble. Interest rate cuts are unlikely to save a struggling industry – such as oil producers facing a collapse in the global oil price – while they will help a housing bubble inflate. (Housing markets will be discussed in greater length in {another chapter of the book}.)

Automatic fiscal stabilisers in the form of welfare payments, unemployment insurance, or the proposed Job Guarantee programme are one natural response to regional divergences. When we decompose the fiscal deficit on a regional basis, it will automatically react to regional disparities. That is, weaker regions will pay less tax, and citizens that benefit from those programmes will have their incomes boosted as a result of the transfers/wages.

The developed economies have drifted into a slow growth regime with economic volatility. In such a regime, are likely to face many growth pauses with some regions dropping into contraction. Since my objective here is not to document every wiggle in activity, these regional recessions will not be pursued further. However, they will matter for market commentary, as well as for policy analysis.